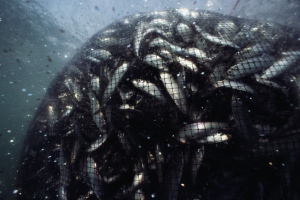 Overfishing of species such as Atlantic herring can put fisheries at risk of collapse.

About one-quarter of seafood sold as ‘sustainable’ is not meeting that goal, according to an analysis taking aim at the two leading bodies that grant this valuable label to fisheries.

In an online paper in Marine Policy1 and at a conference this week in Edinburgh, UK, fisheries biologist Rainer Froese of the Helmholtz Centre for Ocean Research in Kiel, Germany, launched a stinging attack on the schemes by the Marine Stewardship Council (MSC) and the marine-conservation organization Friend of the Sea (FOS) to certify fisheries as sustainable. Such schemes aim to help consumers and retailers to support fisheries that are sustainable and not exploited by overfishing.

Both organizations approve certain stocks of fish and seafood to carry their logo, designating these species as environmentally friendly, and both say that their certification processes are scientifically credible. The presence of the logos can result in higher prices and increased consumer demand for food products that carry them.

To assess whether products certified by the two bodies came from sustainable stocks, Froese and his co-author Alexander Proelss of the University of Trier in Germany compared information from each organization with a variety of independent assessments by fisheries scientists and national and international fisheries management bodies. The authors examined 71 MSC-certified stocks and 76 FOS-certified stocks, including species of mackerel, swordfish and tuna, and concluded that 31% of the stocks labelled as sustainable by the MSC and 19% of FOS-certified stocks do not deserve the label.

Froese says that he was an early supporter of MSC certification in Germany, but that as the number of stocks given the sustainable label increased, “more and more I said, not this one”.

Speaking to Nature from the World Fisheries Congress in Edinburgh, Froese says that pressure is mounting on certification bodies to clean up their acts, with increasing numbers of scientists and non-governmental organizations raising objections to the schemes. “We’re putting them under a lot of pressure and we hope that will work. I want to improve them, not to kill them,” he says.

His criticisms chime with previous concerns about certification for particular species. In 2010, a critique of the MSC by conservation scientist Jennifer Jacquet, marine biologist Daniel Pauly and others in Nature2 triggered a series of responses from scientists both for and against the group.

Jacquet, who works on the Sea Around Us fisheries and ecosystems research project at the University of British Columbia in Vancouver, Canada, says that the paper by Froese and Proelss “represents not only growing concern among scientists about the effectiveness of seafood eco-labelling in general and the MSC label specifically, but an increasing willingness for scientists to take on rigorous research in response to that scepticism — research that the MSC should probably be doing itself”.

She adds, “The results were pretty depressing, even for someone who was already dubious of the MSC.”

Paolo Bray, director of Friend of the Sea in Milan, Italy, says that he considers the study “the best assessment that was ever done of its kind”. After Froese and Proelss completed their study, but before the paper was published, FOS de-certified three stocks, while the MSC has suspended certification for a similar number. Bray notes that once the three de-certified stocks are factored in to the assessment, 88% of fisheries certified by his group are neither overexploited nor overfished.

“This is for FOS a very good result and confirmation of the selectivity of our assessment,” he says, adding that the remaining 12% is down to factors such as FOS accepting data up to five years old, whereas the study by Froese and Proelss considered only two-year-old data.

But the MSC forcefully disagrees with Froese and Proelss’ conclusions. David Agnew, director of standards at the London-based organization, says that the work attempts to redefine the term ‘overfished’.

Froese and Proelss looked at two different measures — how many fish there were and how many were being captured. To calculate what they defined as 'overfishing', they looked at fisheries in which fish captures exceeded the level that would allow a species to stabilize at a population level capable of producing the 'maximum sustainable yield' for humanity. To calculate their definition of 'overfished', they looked at the total biomass of a stock, and looked for fisheries in which it was less than the biomass that would represent the maximum sustainable yield.

Froese says the first of these measures is “globally accepted”. For the second, he says: “What would you call that if not overfished?”

Agnew says that the accepted international standard for 'overfished' involves more complicated and variable "limit reference points", below which not enough new fish are being born and the fishery is at risk of collapse. This is often set at half of the biomass that would represent the maximum sustainable yield, a limit used by bodies such as the Food and Agriculture Organization.

Agnew, who was also at the Edinburgh congress, says that the MSC has done its own research on 44 fisheries using current data, which backed up its belief that these stocks are sustainable.

“There are no overfished stocks carrying the MSC logo. They are all fished sustainably,” says Agnew.

Both sides do agree on one thing — that buying certified seafood is still the best option. The situation for sustainably certified fish might be unsatisfactory to some, but things are even worse for non-certified species.