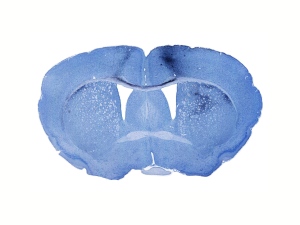 The first images from a project to map the mouse brain have been released.

One of the items high on the big science project to-do list is to devise a wiring diagram for the human brain. Its 100 billion neurons and the hundreds of trillions of connections among these cells consign this goal and the specifics of achieving it to the long-term bin. A first step, though, is a complete diagram of the mouse brain.

Scientists at Cold Spring Harbor Laboratory (CSHL) in Long Island, New York, have started making public detailed images of mouse brain circuitry, releasing on 1 June the first instalment of about 500 terabytes. The goal of the effort, called the Mouse Brain Architecture Project (MBA), is an entire rodent brain wiring plan that would represent the first such mapping of the circuits of a vertebrate brain.

"Current knowledge of brain circuitry is incomplete," says Jonathan Pollock, chief of genetics and molecular neurobiology research at the National Institute on Drug Abuse. "The lack of knowledge about neural circuitry has led to recognition by the scientific community of the need map the brain at the macro-, meso- and microscopic scale."

The MBA complements other efforts, such as the National Institutes of Health's Human Connectome Project and the ALLEN Brain Connectivity Atlas. Pollock says that because the mouse serves as a general model for mammal genetics, the knowledge gleaned could help in the study of diseases such as Alzheimer's, autism, schizophrenia, depression and addiction. In recent years researchers focusing on mammalian brains have placed much attention on individual synapses, connection points between neurons, using electron microscopy. This approach is too complex and currently impractical for application to the whole mouse brain

"I wanted an approach that could pragmatically approach the architecture of the whole nervous system. Our project utilizes tracer injections to delineate the wiring diagram of the whole brain," says Partha Mitra, a bio -physicist at the CSHL and the leader of the project.

The CSHL researchers use four injected tracers to delineate the circuitry. Two of these are "classical" tracers — choleratoxin subunit B and biotinylated dextran amines. Additionally, there are two viral tracers — the adeno-associated virus and a modified version of the rabies virus.

The project produces high-definition images (each image is approximately one billion pixels) of mouse brain sections. Each brain is represented in some 500 images, with each image showing an optical section through a 20-micron-thick slice of brain tissue. Information from other data sources publicly available over the Internet are added to the images and everything is made available to neuroscientists as well as interested members of the general public at http://mouse.brainarchitecture.org. The site can be used as a "virtual microscope" to look inside a mouse brain, with the ability to zoom in to show individual neurons and their processes. Users have access to a multi-resolution viewer that allows them to progress from the front of each brain to the back and follow in 3D the actual neuronal pathways.

Mitra says the intention was to share data with the community, akin to how the astronomy data of the Sloan Digital Sky Survey was made publicly available. "I come from a physics background where open distribution of results prior to publication via a preprint archive (arXiv) has been standard practice for a long time and predates the current growth in open-access journals," he says. Because it can take months — sometimes years — to get a paper published in a journal, he prefers an approach where "scientific communications can be made much more directly and quickly by posting data and results on the web as they become available."

Mitra's team intends to provide tutorial materials that would allow any curious person to engage with data on the website. They have already put up one tutorial so far on major brain pathways, using one of the myelin stained brains displayed on the site. "This is a good entry point to thinking about the overall connectivity structure of the brain," Mitra says. "During the Renaissance," he notes, "artists carried out detailed studies of anatomy, and they were able to do this because the structures were visible to the naked eye. The same is not true for neurons; however, with the virtual microscope that we are providing, it should be possible even for the layperson to engage in some degree of neuroanatomical study. We will be working on tools to enable this further."

The first release included data from 100 injections. More data are being added every week. "We are now releasing brains on a rolling basis." Mitra says they are halfway through but it is hard to know how many injections will be needed because "mouse brains show individual variation, so building up a statistical description of the variations will require many repeats. Since no one has ever tried doing this, we don't know how many repeats we will need."

The scientists have funding until 2014 and expect to have a "reasonable first draft" of a mesoscale rodent brain connectivity map by then, Mitra says.

Kathleen Rockland, a neuroscientist at The Picower Institute for Learning and Memory at the Massachusetts Institute of Technology, praised the approach. "As a learning tool for long-distance connections and brain structures, this is superb — a combination of virtual microscope, encyclopaedia and public forum, where comments and dialogue are encouraged."