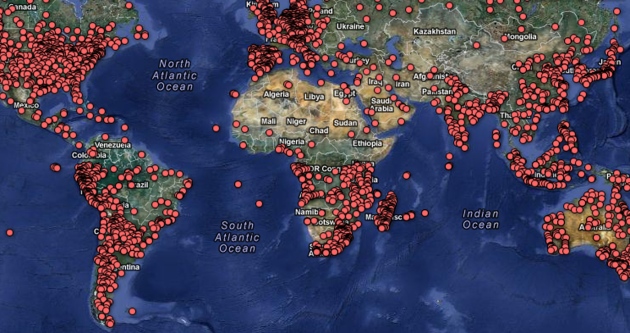 Researchers are seeking help to determine the location, type of fuel and electricity generation for many of the world's estimated 30,000 power plants.

Big, ugly and emanating an incessant industrial hum, power plants belch clouds of steam and pollution as they generate electricity, the life-blood of modern society. You might think that it would be easy enough for a scientist to work out where they are and what they are doing.

You would be wrong. A team of researchers is now appealing to the public to rectify that situation.

“It turns out that we know far less about fossil fuels than we thought we did,” says Kevin Gurney, an emissions modeller at Arizona State University in Tempe, and leader of the Ventus citizen-science project. “We could use some help.”

Decades of research into global warming and its causes have produced greenhouse-gas inventories that allow scientists to paint a fairly comprehensive portrait of human industrial activity at national and global scales. These inventories work less well, however, as scientists seek to model global carbon emissions at a detailed level across local landscapes. Although data are available in places such as the United States, Europe and Canada, they remain difficult to access across much of the world.

For the Ventus project, Gurney’s team has designed a simple Google Earth application that allows anybody to provide information — such as specific location, type of fuel and electricity generation — about the world's estimated 30,000 power plants, which together produce roughly 40% of global carbon emissions. Some 25,000 facilities are already listed, courtesy of a commercial database that contains voluntary and often incomplete reports from industry. Participants do not have to register with the project website, but if they do, they can join a competition: the citizen scientist who enters the most data will win a trophy and a position as a co-author on any resulting paper.

Success is not guaranteed. A team of geographers at King's College London embarked on a similar effort to locate dams in 2006, but the crowdsourcing component was a bust. Seven years and several graduate students later, Mark Mulligan and his team are finally preparing to publish a database of some 36,000 dams around the world.

Mulligan is sceptical that the power-plant initiative will be any different, although he acknowledges that people are more familiar with the software now than they were in 2006, and are also more likely to engage with power plants near their homes than with remote reservoirs. “Getting people to map local things, that’s more interesting,” says Mulligan.

The power-plant research is part of a larger initiative at NASA’s Jet Propulsion Laboratory in Pasadena, California, that seeks to capitalize on atmospheric carbon dioxide data provided by Japan’s Greenhouse Gases Observing Satellite (GOSAT). Researchers are building a high-resolution model of the global carbon cycle in the hope of building a monitoring system that can verify and track data about emissions from fossil fuels. Solving that piece of the carbon equation would also help scientists resolve enduring mysteries about how much carbon is taken up and given off by vegetation and the oceans.

Building on earlier work with urban emissions, Gurney’s team has already modelled fossil-fuel emissions across the world at a resolution of 10 square kilometres. The new project uses various data sets, including satellite imagery showing lights at night and human development, to work out where power is being used and so where the emissions are coming from. The team now wants to increase the resolution to 1 square kilometre, and the single largest source of uncertainty is power plants.

Gurney readily acknowledges the risk of relying on crowdsourcing to fill that data gap, but says that the potential pay-off is overwhelming in comparison with the minimal investment needed to design the project website. And if it does not pay off, then he and his team will keep plugging away, pressing governments for better data. “I’m optimistic over the long haul that we will get there,” says Gurney, “but it will take some time.”