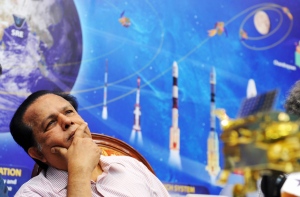 Gopalan Madhavan Nair, former chairman of the Indian Space Research Organisation, has been barred from holding any government job.

Gopalan Madhavan Nair, then-chairman of the Indian Space Research Organisation (ISRO) in Bangalore, became a celebrity when his agency celebrated India’s first successful Moon mission in 2008 (see Nature 455, 1163; 2008). But that fame has now turned to infamy.

Last week, the Indian government barred Nair and three of his former ISRO colleagues "from re-employment, committee roles or any other important role under the government”. According to government documents leaked to the Indian Express newspaper and Times Now television, they were ordered to give up, "with immediate effect”, any assignment or consultancy they may have had with the government. ISRO spokesman S. Satish confirmed that Nair has been asked to give up his national professorship at ISRO, a position he has held since his retirement as chairman in 2009.

The censure is fallout from a probe, ordered by Prime Minister Manmohan Singh last May, into a controversial deal between Antrix — ISRO's commercial arm — and Devas Multimedia, a telecommunications company, both based in Bangalore.

The deal, signed in January 2005 during Nair's tenure, required ISRO to lease to Devas 90% of the transponder capacity on its two future S-band (2.5-gigahertz) satellites for a total of US$264 million over 12 years. The 2.5-gigahertz band is used globally for providing mobile broadband services.

The deal sparked controversy in 2010 after government auditors pointed out that the fee for the S-band, set without competitive bidding, was far below market value. Singh ordered the probe to determine whether ISRO officials had deliberately misled the cabinet into sanctioning the deal without knowing its terms.

The government scrapped the deal in February 2011. Devas has filed with the London Court of International Arbitration "to resolve Antrix's breach of contract". Antrix wants the arbitration to take place in India, and ISRO says that the matter is now before the Indian supreme court.

The action is against Nair and three others: K. Bhaskaranarayana, who was scientific secretary at ISRO, K. N. Shankara, former director of the ISRO Satellite Centre and K. R. Sridharamurthi, who was managing director of Antrix. It is based on the probe committee's report, which remains private.

Both Nair and Sridharamurthi deny any wrongdoing, and told Nature that they are considering legal action. "Once I get the details of the charges against me, I will decide on a course of action," says Nair.

Nair says that there is no requirement for reporting contracts to the cabinet, and that there was no competitive bidding because there were no competitors when the deal was signed in 2005.

In a move that has shocked the Indian science community, Nair has blamed his troubles on his successor at ISRO, Koppilli Radhakrishnan. In television and newspaper interviews, Nair has accused Radhakrishnan of pursuing a "personal agenda" against him, adding that the agency "has gone to the dogs" under his successor. Radhakrishnan declined to react to Nair's outburst, and his spokesman says that he will do so at the "appropriate time".

The infighting could not come at a worse time for the agency. Narendra Bhandari, a senior scientist at the ISRO's Physical Research Laboratory in Ahmedabad, says that he hopes it will not affect the Mars mission he is working on for launch in the next two years. India is also planning to send another mission to the Moon in 2014 and to put a human in space by 2020. "2012 is crucial for us when we are planning to launch our first microwave satellite and test-fly our launcher using homemade cryogenic engines," says Satish.

Former ISRO chairman Udipi Ramachandra Rao says that the agency’s international image has been tarnished. "I do not know how it will recover from this backlash," he says.