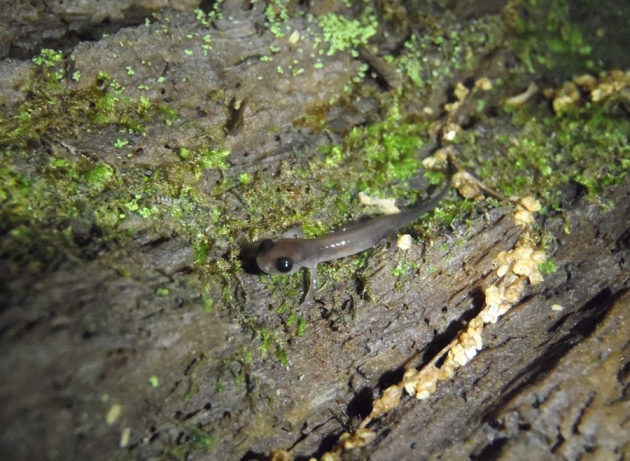 The Northern grey-cheeked salamander (Plethodon montanus) has got significantly smaller in recent decades.

Salamanders in the US Appalachian Mountains are shrinking, and researchers suspect that climate change is the culprit, according to a study published this week in Global Change Biology1.

Six species of the genus Plethodon are now 2–18% smaller than they were in the 1950s, according to body measurements of adult salamanders that exclude the amphibians’ tails.

“This is the first evidence of shrinking salamanders,” says study co-author Karen Lips, an amphibian ecologist at the University of Maryland in College Park. “We don’t know if it’s a genetic change or a sign that they are able to adjust to new conditions.”

But although the effect seems to be significant, it is not universal. The average body size of a related species from the same region has increased during the same period, and eight other species in the Plethodon genus showed no significant change.

Lips’s analysis draws on salamander specimens collected between 1950 and 2007 by Richard Highton, an ecologist at the University of Maryland who has since retired. In 2011–2012, Lips and her colleagues resampled 78 of the sites originally surveyed by Highton, which stretch over 767 kilometres of varied elevation in the Appalachians. They also included measures they made in 2009 at sites in Great Smoky Mountains National Park in Tennessee.

Lips originally sought to determine whether a possible decline in salamander populations first reported by Highton2 was caused by Batrachochytrium dendrobatidis, a fungus that causes deadly infections in amphibians. When she found that fewer than 1% of the animals she studied were infected with the fungus, Lips began to suspect that climate change could be a factor.

Lips and her team found that reduced size was greatest at lower latitudes, areas experiencing increased temperature and decreased rainfall over the 55-year period — although no single factor could explain the declines in body size.

To determine how climate conditions could affect salamander survival, study co-author Michael Sears, an ecological modeller at Clemson University in South Carolina, created a biophysical model simulating salamanders’ daily activity using temperature and moisture data from the US National Weather Service. He found that metabolic activity for two sizes of salamander — modelled on the relatively tiny P.  cinereus and the much larger P. glutinosus — increased between 7.14% and 7.86% over the five decades. Unless salamanders eat more to compensate for a faster metabolism, they will get smaller, says Lips.

David Bickford, an evolutionary ecologist at the National University of Singapore, says that the findings are proof of the warming-related shrinkage of ectotherms, or ‘cold-blooded’ animals, that he predicted years ago3. “Why some species seem to be more vulnerable to climate change and how other factors interact with climate are vital aspects for future research,” says Bickford.

But other researchers say that Highton’s data were never intended for a climate-change study. Joseph Milanovich, an ecologist at Loyola University Chicago, notes that Highton did not collect specimens at night, which could produce a different size distribution of amphibians from the same populations. That could distort the body-size comparisons between the new and old datasets.

Ken Dodd, a population ecologist at the University of Florida in Gainesville, says that the study overstates the role of climate change. “Other potential factors—such as long-term air pollution, habitat changes and forest-structure changes due to nonindigenous insects—weren’t considered in the analyses,” says Dodd, who sampled salamanders with Highton in the 1970s.

Lips says that her team’s earlier work has ruled out over-collection, logging and acid rain, and that climate change seemed most plausible driver of the body-size changes over such an expansive, mostly protected geographic range.