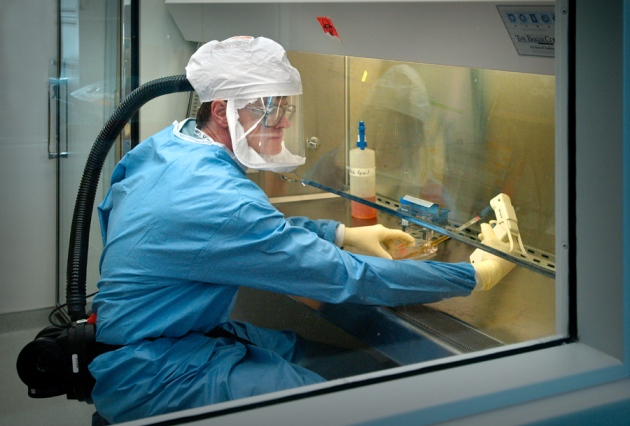 Work with potentially lethal viruses has to be done in stringent biosafety conditions.

A controversial influenza study was run in accordance with new US biosecurity rules only after the US National Institute of Allergy and Infectious Diseases (NIAID) disagreed with the university’s assessments, Nature has learned. While some biosecurity experts express shock that the work could initially have been deemed exempt, others say that the case shows that the system’s checks and balances are working.

The University of Wisconsin–Madison initially ruled that the project did not fit the criteria for dual use research of concern (DURC); which includes research that could be misused to threaten public health, national security or crops or livestock. But the NIAID disagreed.

The project, led by virologist Yoshihiro Kawaoka, is an example of ‘gain-of-function’ flu research, in which influenza viruses are engineered to alter properties such as the range of hosts, transmissibility and virulence. Such research is controversial because it could be used to generate flu strains with pandemic potential. The study aimed to establish the likelihood of a 1918-like pandemic virus emerging from current avian strains, and to investigate what made the 1918 H1N1 virus — which killed some 40 million people — so virulent.

The team used genes from wild avian H1N1 viruses that coded for proteins resembling those of the 1918 virus to construct new viruses. The new viruses were not only able to spread between ferrets — the best current model for human flu transmission — they were also more virulent than the original avian viruses. The team therefore argues that there is a high risk that a 1918-like virus could emerge naturally1.

The NIAID has funded the six-year project since 2009. But when the government introduced the new rules in March 2012, the agency asked the university to check whether the project fell under these regulations.

Research falls under the DURC rules if it meets any of seven criteria; for example, if it increases the stability or transmissibility of the agent or toxin (see ‘Criteria of concern’). But when the university reviewed the proposal in July 2012 and the progress report the following November, it concluded that the project did not meet any of the criteria. It argued that the research would not add risk beyond that done to reconstruct the 1918 flu virus in 2005 — nor would it generate more virulent viruses.

Research that meets any one of seven criteria set out by the US government is deemed dual use research of concern.

Research requires a risk-mitigation plan if it:

1. Enhances the harmful consequences of the agent or toxin

2. Disrupts immunity or the effectiveness of an immunization against the agent or toxin without clinical and/or agricultural justification

3. Confers to the agent or toxin resistance to clinically and/or agriculturally useful prophylactic or therapeutic interventions against that agent or toxin or facilitates their ability to evade detection methodologies

4. Increases the stability, transmissibility, or the ability to disseminate the agent or toxin

5. Alters the host range or tropism of the agent or toxin

6. Enhances the susceptibility of a host population to the agent or toxin

7. Generates or reconstitutes an eradicated or extinct agent or toxin

But in a letter to the university on 26 Febru­ary 2013, Carole Heilman, director of the NIAID’s Division of Microbiology and Infectious Diseases, says that the agency “respectfully disagrees” with these assessments. “This is the final determination,” she wrote, instructing the university to develop the required risk-mitigation plan. That plan was approved in April 2013.

Nature obtained the review by the biosafety committee and the risk–benefit assessment of the university and sent them to biosafety and biosecurity experts. Richard Ebright, a molecular biologist at Rutgers, The State University of New Jersey in Piscataway, says that the research “unequivocally” met four of the seven DURC criteria. And David Relman, a member of the board that drafted the criteria and a microbiologist at Stanford University in California, says that he was surprised that the project was not initially seen as DURC, calling it a “poster child” for such research.

But Adolfo Garcia-Sastre, director of the Global Health and Emerging Pathogens Institute at Mount Sinai Hospital in New York is reassured by the process. “If anything, this means that the system is working,” he says. “There are a lot of double- and triple-checks being conducted before experiments are approved, and this has been the case for these experiments.”

The DURC regulations were introduced after groups led by Kawaoka and Ron Fouchier of the Erasmus Medical Center in Rotterdam, the Netherlands, managed to engineer potentially pandemic forms of the H5N1 avian flu virus2, 3.

Rebecca Moritz, a programme manager at the University of Wisconsin—Madison’s Office of Biological Safety, says that the university had long discussed DURC issues, but had no official framework in place to assess such work, and had to put together an evaluation process at short notice after the government’s rules were released.

The biosafety committee’s rationale, she explains, was to compare the risks of the proposed project with those of research involving the reconstruction of the 1918 human flu virus2, which had already been approved. The committee felt the new work did not pose additional risks, she says. But the committee’s thinking shifted after the NIAID emphasized that the work could generate riskier versions of current bird viruses, she says.

Experts are strongly divided over the risks and benefits of gain-of-function flu research. Relman opposes such research, but says that whatever stance scientists take, everyone should agree that the process for assessing it is transparent and effective.

Oversight cannot be left to scientific agencies with an inherent interest in promoting science, he says. “What is needed is dispassionate, non-partisan rigorous oversight of this work”.