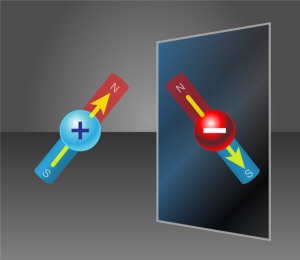 Physicists are measuring fundamental properties of protons and antiprotons to test the principle that antiparticles behave exactly like the mirror images of their particle counterparts moving backwards in time — and with their electric charges reversed.

In an attempt to solve the mystery of the Universe’s missing antimatter, physicists have achieved the most precise measurement yet of the proton's inherent magnetism.

Publishing in Nature on 28 May1, a group of researchers has mastered a technique to measure the magnetic moment of a proton — the microscopic equivalent of the strength of a bar magnet — with an accuracy of 3 parts per billion.

The experiments are part of an effort to figure out why the Universe appears to be filled with matter rather than antimatter. Antimatter acts as a mirror image of matter, identical but for the flipping of a few key properties. When the two meet, both are annihilated in a flash of energy. Physicists think that antimatter and matter would have been produced in equal amounts in the Big Bang; the fact that there is any matter left at all is a conundrum.

Any difference between the magnetic moment of the proton and that of the antiproton would reveal an asymmetry that in the early Universe could have tipped the balance in favour of matter, says Andreas Mooser, a physicist at the Johannes Gutenberg University of Mainz in Germany, a co-author of the study. “The current understanding of physics is that these two values should be equal,” he says.

Andreas Mooser tells Elizabeth Gibney how the properties of the proton and the antiproton could probe the physics of the early Universe.

A proton’s magnetic moment arises from a fundamental quantum property called spin, which causes the proton to behave as a tiny bar magnet with a north and a south pole. When placed in an external magnetic field, the proton’s spin can either align with the field or flip to orient itself against the field.

The researchers calculated the proton’s magnetic moment by observing a single proton flip between these two states. They suspended a proton in a trap and applied a magnetic field that caused the tiny bar magnet to flip. They then pushed the proton into a second trap that had a magnetic field gradient, and measured its minute vibrations to determine the alignment of its spin. By sending the proton back and forth between the traps — making repeated flips and measurements — the team was able to measure very precisely the frequency at which the magnetic field induces the flip, from which they calculated the proton's magnetic moment.

The experiment is “clearly a breakthrough”, says Ryugo Hayano, a physicist at the University of Tokyo and a spokesperson for the Atomic Spectroscopy and Collisions Using Slow Antiprotons (ASACUSA) at CERN, Europe’s particle physics laboratory near Geneva, Switzerland. But it is also just the beginning, he says. “They’ll hope they can apply the same method with an antiproton and reach a similar level of precision,” he says.

Already Gabrielse's team has measured the antiproton's magnetic moment as part of the Antihydrogen Trap (ATRAP) experiment at CERN and found no difference4. Mooser and his team can potentially do that to better precision, and their plan to move their experiment to the antimatter-making facility at CERN as part of the Baryon Antibaryon Symmetry Experiment (BASE). When CERN’s facility, known as the Antiproton Decelerator re-opens this summer, ATRAP, BASE and three other groups will be using it in a race to spot tiny discrepancies between matter and antimatter.

These experiments will also explore other fundamental properties for discrepancies between matter and antimatter. These include the spectra of antihydrogen and hydrogen's electromagnetic emissions and their masses. Hayano says that discovering even the tiniest differences would have “drastic” implications for a fundamental theory of physics called CPT symmetry, which predicts that the mass of a particle and its antiparticle should be the same.

No one knows how precise experiments need to be before they see nature break this fundamental symmetry — assuming it does. “Recent theories say that this sacred theorem might be violated, but they don’t predict the magnitude of the violation,” says Hayano. “So we are trying to look for many different ways in which we can reach the highest possible precision.”