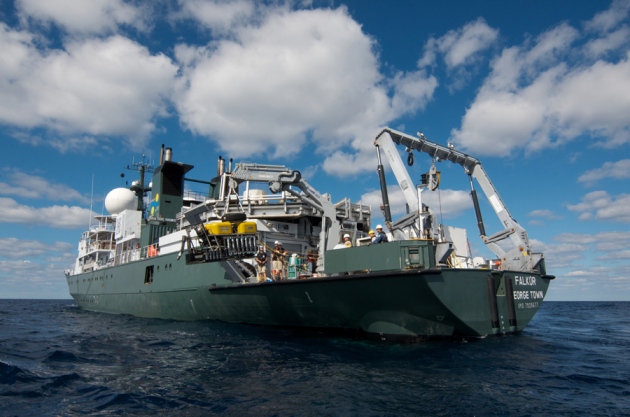 Life onboard the R/VFalkor is a far cry from the spartan existence endured by most academic oceanographers on research trips. The privately run research vessel features a sauna, a glassed-in lounge and a helicopter pad to be kept clear at all times for VIP guests.

All of which isn’t too surprising, as two of the VIPs are the Falkor’s benefactors: Google board chair Eric Schmidt and his wife Wendy. The 83-metre former fishery-protection vessel was retrofitted by the Schmidt Ocean Institute of Palo Alto, California, at a cost of US$60 million. Supporters say that it adds a new capability to US oceanography’s fraying infrastructure: an ability to take on riskier projects more quickly than federal agencies can.

“Our hope is to accelerate the pace of research,” says Wendy Schmidt. “It’s not science as usual.” The ship’s first full-length science cruise ends on 29 March when it returns to port in St Petersburg, Florida, after a three-week trip.

For some oceanographers, the arrival of the Falkor — named after a lucky dragon in the film The NeverEnding Story — is a stroke of luck. The US research fleet is ageing and shrinking: down from 26 ships in the University-National Oceanographic Laboratory System in 1995 to 19 today. Federal funds for ship time are dwindling as well. For the first time in 15 years, for example, microbiologist Julie Huber of the Marine Biological Laboratory in Woods Hole, Massachusetts, is relying entirely on private money for her studies. A slot on the Falkor in September will allow her to test a microbial sampler on the sea floor — technology development that she says would have progressed more slowly with incremental federal grants.

There is a long history of millionaires dabbling in oceanography without doing much publicly available science. Hollywood director James Cameron has a small group of researchers advising him on his deep-sea dives, such as his record-breaking trip last year to the Mariana Trench. He is donating the submersible used on that dive to the Woods Hole Oceanographic Institution (WHOI) in Massachusetts, although he is holding back the discoveries from that plunge for use in a feature film.

The Schmidt Ocean Institute, established in 2009, aims to reach a wider array of scientists. A parallel set-up, the Marine Science and Technology Foundation, also headed by Eric Schmidt, supports the development of oceanography tools, such as a video recorder for plankton and a surface-water analyser powered by wind and solar energy. “They are accelerating change in a field which was already changing gradually,” says Kim Juniper, an oceanographer at the University of Victoria in Canada, who will lead a Falkor cruise around Vancouver Island in August to study waters with low oxygen levels.

The Falkor can also carry equipment from other organizations. In 2014, for instance, it will take the WHOI’s deep-diving Nereus robot to the Mariana Trench.

Given the ship’s Internet ties, it is no surprise that managers favour projects emphasizing open data. Charles Paull, a marine geologist at the Monterey Bay Aquarium Research Institute in Moss Landing, California, is leading the current cruise in the Gulf of Mexico, where his team is mapping an underwater limestone cliff that bears marks from the meteorite impact 65 million years ago that is thought to have killed the dinosaurs off. Paull plans to post his maps on Google Earth within two months — not the two years that most oceanographic data take to trickle out.

Data sharing is not a requirement for research proposals, says Victor Zykov, Schmidt Ocean’s director of research, but those that include an open-data component are ranked higher than those of equal scientific value that do not.

Falkor cruises are scheduled after the proposals have been peer reviewed by independent scientists. For the round of cruises beginning in 2014, the 48 applications made were whittled down to seven projects. Sixty-one applications have arrived for the cruises beginning in 2015, with a final selection of seven or so expected late this summer, says Zykov. “It’s hard to deny that interest is growing,” he says. Wendy Schmidt adds that if the cruises turn out good science, the institute may consider adding a second ship in the future.

One catch is that although ship time is provided for free, researchers must find a way to fund their salaries and any post-cruise science. For some this isn’t too much of a problem. Chris German at the WHOI, for instance, used leftover NASA money from an earlier cruise to pay for his portion of a Falkor trip this summer to the Caribbean, where he will use Nereus to hunt for new hydrothermal vents.

Just about the only other US ship allowed such unfettered exploration is the US National Oceanic and Atmospheric Administration’s Okeanos Explorer, German says. But the Falkor, with fewer education and outreach obligations, can operate with more focus. “It’s a new way of doing business,” he says. “The model is theoretically good, but how it’s going to work out remains to be seen.”