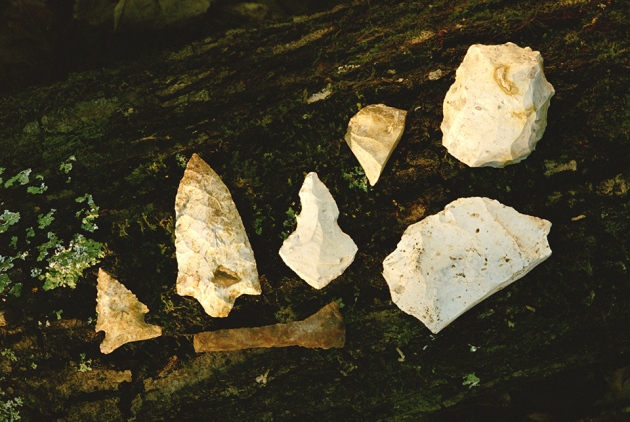 Early Americans left traces such as these arrowheads.

Archaeologists need a new theory for the colonization of the Americas. Plant and animal DNA buried under two Canadian lakes squashes the idea that the first Americans travelled through an ice-free corridor that extended from Alaska to Montana.

The analysis, published online in Nature on 10 August and led by palaeo­geneticist Eske Willerslev of the University of Copenhagen, suggests that the passageway became habitable 12,600 years ago1. That’s nearly 1,000 years after the formation of the Clovis culture — once thought to be the first Americans — and even longer after other, pre-Clovis cultures settled the continents (see 'American trail'). 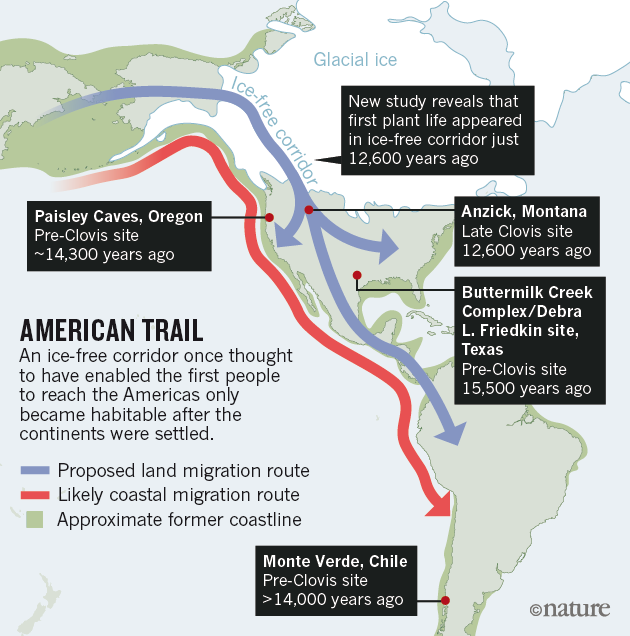 Some 14,000 years ago, as North America was emerging from the last Ice Age, twin glaciers that blanketed central Canada receded, creating the ice-free corridor before the appearance of Clovis people across what is now the central United States. “That coincidence seemed too powerful to ignore,” says archaeologist and co-author David Meltzer of Southern Methodist University in Dallas, Texas. “People who have been cooling their heels in Alaska for thousands of years see this new land open up and they come blasting down this corridor into the new world.”

The ice-free-corridor theory began to crack in the 1990s, when researchers made a case that humans lived at Monte Verde in Chile more than 14,000 years ago. The discovery of other possible pre-Clovis sites in North America further shook the theory that Clovis people were the first Americans. But the idea that their ancestors at least trekked through the corridor persisted, says Meltzer, even though there was little consensus on when the passage opened or when it became habitable. “It’s 1,500 kilometres. You can’t pack a lunch and do it in a day.”

Palaeogeneticist Eske Willerslev talks to reporter Ewen Callaway about his team’s work on the ice-free corridor.

To build a picture of the habitat as it crept out of the Ice Age, Willerslev’s team analysed DNA in cores taken from beneath two lakes in what was the last stretch of the corridor to melt. The first plant life — thin grasses and sedges — dates back just 12,600 years. The region later became lusher, with sagebrush, buttercups and even roses, followed by willow and poplar trees. This habitat attracted bison first, and later mammoths, elk, voles and the occasional bald eagle. Around 11,500 years ago, the corridor began to resemble the pine and spruce boreal forests of today’s landscape.

The region’s bounty must eventually have tempted hunter-gatherers. But the dates rule out its use as a corridor by Clovis people and earlier Americans to colonize the Americas, says Willerslev. Instead, both probably skirted the Pacific coast, perhaps by boat.

“The ice-free corridor has been shown to be dead in the water.”

Loren Davis, an archaeologist at Oregon State University in Corvallis, agrees: “Now that the ice-free corridor has been shown to be dead in the water — no pun intended — we can start to look at something like a coastal migration route.”

Other recent research has hinted that Clovis people and other early humans could not have moved through the ice-free corridor. In June, a team led by Beth Shapiro, an evolutionary palaeobiologist at the University of California, Santa Cruz, sequenced ancient DNA from bison that lived to the north and south of the passageway and found that these populations were cut off from each other during the last Ice Age until at least 13,000–13,400 years ago, when they started mixing again2. Shapiro, too, now favours the theory of a coastal migration route for humans.

Discovering sites along these routes won’t be easy, because most are now likely to be underwater. But this summer, Davis and his colleagues began surveying areas of the Pacific Ocean, such as former bays and estuaries that might have served as pit stops for the first Americans. In 2017, the team will start to collect marine sediments to look for signs of habitation, such as stone artefacts or ancient human DNA.

Willerslev hopes to be part of the searches, and thinks that recreating these once-coastal habitats through DNA sequencing could prove to be a valuable tool. The fact that early humans advanced to the Americas despite continent-sized glaciers standing in the way has also prompted him to rethink the conventional wisdom that early humans, like other animals, migrated solely in search of food.

“Just like people today are trying to reach the top of Mount Everest or the South Pole, I'm sure these hunter-gatherers were also explorers and curious about what would be on the other side of these glacier caps,” he says. “When you first reach California, why would you go further? Why not just stay in the Bay Area?”