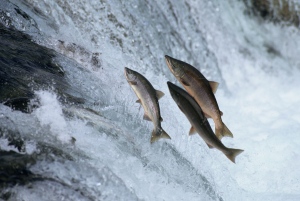 Salmon have been spawning earlier as water temperatures rise.

Climate change has altered the behaviour and interactions of many plants and animals, including when fish migrate and plants flower. But evidence has been lacking that such shifts have a genetic basis.

Organisms often deal with environmental pressures by altering traits through a process known as phenotypic plasticity, which does not require genetic changes. But many organisms will need to evolve genetic adaptations to climate change to survive, and seasonal traits such as the timing of migration are those most likely to evolve as they are genetically heritable.

Ryan Kovach, a population ecologist at the University of Alaska in Fairbanks, and his colleagues have now investigated the genetic basis of shifts towards earlier migration times in spawning pink salmon (Oncorhynchus gorbuscha) in Auke Creek, a stream near Jueau, Alaska1. The team found that in 2010, the fish swam upstream to spawn nearly two weeks earlier than they did 40 years ago, a trend also seen in other salmon populations. Over the same period, the average temperature of the water rose by more than one degree. Now, Kovach has linked the change in behaviour to a genetic change.

“It has been extremely difficult to determine whether any of the multitudes of observed phenological changes in nature are due to rapid microevolution within a population," says Kovach. “This study is the first empirical example using genetic data to confirm this theory, and so addresses a key research gap that has been acting as a thorn in the side of the field.”

The researchers used a genetic marker that had been bred into late-migrating fish in the 1980s to differentiate late-migrating fish from early-migrating fish. The marker was on the gene MDH B1,2, which is not affected by natural selection. They then looked at 32 years of genetic data begining in the 1970's taken from 17 generations of the fish. In addtion, between 5 and 30 fish were sampled every day in the odd years from 1983 to 1993, and in 2001 and 2011.

They found that by 2011, the number of late-migrating fish had dropped by at least 20%, to make up just 10% of the population. They also found a three-fold decrease in the frequency of the genetic marker. They found no changes in the frequencies of many other genes used as controls. The findings are published today in the Proceedings of the Royal Society B1.

“We show that there has been a genetic shift towards earlier migration timing through what appears to be natural selection against the late-migrating individuals in the population,” Kovach says.

The genetic changes evolved quickly, over just one to two generations showing that organisms can adapt over the short periods necessary to stay ahead of climate change, the study says. In addition, the salmon population has remained stable over the past 40 years, suggesting that the changes “have aided in the resilience of the population to environmental change”, says Kovach.

“This is a fascinating study allowing an extraordinary look at how selection changes migration timing over a relatively long time frame. Evidence for evolutionary responses to climate change are relatively rare, and this is an intriguing example,” says Lisa Crozier, a fish ecologist at the Northwest Fisheries Science Center in Seattle, Washington

But, she says, the study does not address whether earlier migration times might have a negative effect on the survival of juveniles once they head out to sea. “Opposing selection in different life stages is a serious concern with climate change,” she says.

“The fact that the population is not declining despite strong selection and thermal challenges is encouraging, and suggests that maintaining as much natural genetic and behavioural diversity within populations as possible will help them to survive climate change,” she adds.