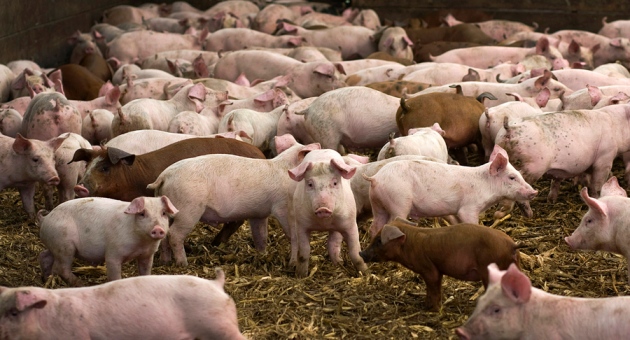 Pigs on industrial farms are known to harbour antibiotic-resistant bacteria.

Previous research has found that livestock workers are at high risk of carrying MRSA, compared to the general population2. But it has been unclear whether the spreading of MRSA through livestock puts the public at risk of infection.

The study examined the incidence of infections in Pennsylvania, where manure from pig farms is often spread on crop fields to comply with state regulations for manure disposal. Researchers reviewed electronic health-care records from patients who sought care from the Pennsylvania-based Geisinger Health System (which helped to fund the study) in 2005–10.

The team analysed cases of two different types of MRSA — community-associated MRSA (CA-MRSA), which affected 1,539 patients, and health-care-associated MRSA (HA-MRSA), which affected 1,335 patients. (The two categories refer to where patients acquire the infection as well as the bacteria’s genetic lineages, but the distinction has grown fuzzier as more patients bring MRSA in and out of the hospital.) Then the researchers examined whether infected people lived near pig farms or agricultural land where pig manure was spread. They found that people who had the highest exposure to manure — calculated on the basis of how close they lived to farms, how large the farms were and how much manure was used — were 38% more likely to get CA-MRSA and 30% more likely to get HA-MRSA.

The researchers also analysed 200 skin, blood, and sputum samples isolated from patients in the same health-care system in 2012. The MRSA strains found in those samples are commonly found in humans. Researchers did not find any evidence of bacteria belonging to clonal complex 398 (CC398), a MRSA strain classically associated with livestock and found in farms and farmworkers in many previous studies.

However, there is little information about which MRSA strains are most common on US farms, so the absence of CC398 is not a sign that MRSA is not being transmitted from livestock to humans. “We’ve done studies in Iowa, we haven’t always found CC398. That’s not too shocking,” says Tara Smith, a microbiologist at Kent State University in Ohio, who was not involved in the study.

Many researchers think that widespread use of antibiotics to encourage growth in farm animals fuels the proliferation of MRSA and other drug-resistant bacteria. The latest findings suggest that manure is helping antibiotic resistance to spread, says Joan Casey, an environmental-health scientist at the Johns Hopkins Bloomberg School of Public Health in Baltimore, Maryland, and a co-author of the study.

“We’ve certainly described a connection we think is plausible,” she says. “We haven’t described every step in the path.”

“It’s a pretty interesting and provocative observation,” says Robert Daum, a paediatrician and the principal investigator of the MRSA Research Center at the University of Chicago in Illinois. He adds that he would like to see similar studies done in different geographic regions, and research to find out whether the MRSA strains carried in pig manure are the same as the MRSA strains found in nearby human infections.

Casey is at work on a follow-up genetics study to identify the most common MRSA strains in the region.