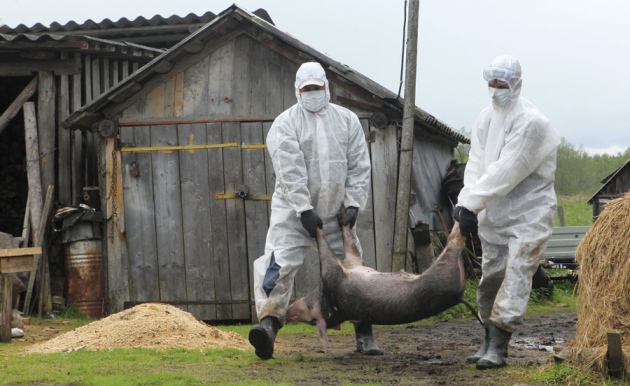 Mass culls and vigilant hygiene are the main forms of defence against the African swine fever virus.

Russian authorities have incinerated tens of thousands of pigs and closed roads in the past few weeks, in an attempt to contain an emerging outbreak of African swine fever, a viral disease so lethal to the animals that it has been likened to Ebola. The spread of the disease comes with a heavy economic toll — last year, the Russian Federation lost 300,000 of the country’s 19 million pigs to swine fever, at an estimated cost of about 7.6 billion roubles (US$240 million).

African swine fever was also detected for the first time in Ukraine in late July, and European and Asian countries are on the alert to deal with outbreaks that could cost their pork industries billions of dollars. With no vaccine or cure for the disease, mass culls and vigilant hygiene offer the main defence.

Scientists first encountered African swine fever in the 1920s in domestic pigs in Kenya, where the vicious haemorrhagic fever felled nearly every animal infected. The virus, which is also carried by warthogs and ticks without causing disease, is now endemic in much of sub-Saharan Africa, limiting pig farming there. It does not infect humans.

In 1957, the virus jumped to Portugal after pigs near Lisbon’s airport were fed infected human food scraps (the virus particles can survive meat curing processes). It then hit Spain, and import of the region’s ham — including the coveted jamón ibérico — was banned by many countries, until the disease was eradicated in Spain and Portugal in the mid-1990s.

The cases now flaring up in Russia, Ukraine and other countries in the Caucasus have their origins in a 2007 outbreak in the former Soviet republic of Georgia, where the virus gained a foothold after being imported from Africa. “It wasn’t diagnosed for several months because they weren’t really looking for it,” says Linda Dixon, an expert on African swine fever at the Institute for Animal Health in Pirbright, UK. The disease quickly jumped to neighbouring Azerbaijan, Armenia and Chechnya, before fanning out across Russia (see ‘Pig plague’). 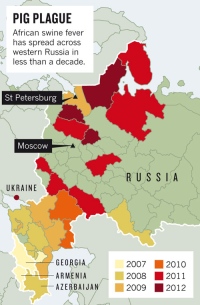 The recent spread of the virus means that the Ukrainian outbreak, now under control after authorities culled 208 pigs and instituted quarantine measures, did not come as a surprise, says Juan Lubroth, the chief veterinary officer at the Food and Agriculture Organization of the United Nations (FAO) in Rome, who is in charge of the organization’s response to the outbreak.

Nearby countries, such as Moldova, Belarus and the Baltic states, could be next. To the east, the disease has been detected on the doorstep of Kazakhstan, which shares a long border with China, home to more than 1 billion pigs. China also risks importing the virus through its growing trade with African nations.

Europe’s large pig farms are buffered by better biosecurity and hygiene practices. But agencies such as the UK Department of Environment, Food and Rural Affairs in London are nevertheless watching the situation closely. “How this will pan out, we don’t really know,” Lubroth says. “You’re asking me to look into a crystal ball.”

The variety of ways in which African swine fever spreads only increases the uncertainty. Pigs can leave virus particles on transport vehicles, for example, exposing whole shipments of uninfected animals. Biosecurity measures, such as scrubbing trucks and decontaminating farmers before they enter and leave pig pens, can help to contain outbreaks. But infected wild boar, whose populations stretch across Russia and Europe, pose a transmission threat that is harder to control. “Boars don’t require visas to move across borders,” says Lubroth.

The pigs’ food can also carry the virus if it includes contaminated pork products. Swill feeding, in which pigs are fed scraps of human food waste, is popular among small-scale farmers. Limiting this practice (which is banned in the European Union) or heat-sterilizing the food scraps can prevent disease transmission, says Dixon. “I remember being taken to a little backyard farm near Nairobi, and that farmer was doing everything correctly. He had a cooker with a big pan of entrails that he was feeding to pigs and he had a little tray of disinfectant outside the pig pens.”

The FAO warns that continued spread of African swine fever could be very costly. Russia does not export its pork, but trade restrictions could prove expensive for other countries where the disease becomes endemic.

“If you are a small producer, and you lose all your five pigs, that is devastating to the family.”

Denis Kolbasov, director of the National Research Institute for Veterinary Virology and Microbiology of Russia in Pokrov, says that officials often have little appetite for expensive countermeasures such as widespread culling and quarantine that could disrupt Russia’s billion-dollar pork industry. Meanwhile, backyard farmers often do not report suspected cases for fear of losing their livelihood.

“If you are a small producer, and you lose all your five pigs, that is devastating to the family,” says Lubroth. “That is the situation I see in many parts of Europe and Africa.” African swine fever was especially costly in South Ossetia during a 2008 conflict with Georgia, because many farmers there could not grow crops and relied on livestock for food and income.

While animal-health officials focus on containing the spread of African swine fever, scientists believe that it should be possible to develop a vaccine to eradicate the disease. The lucky few pigs that survive infection are rendered immune, so Dixon’s lab and others are working to identify which of the virus’s 175 or so genes trigger the immune system. In principle, researchers could engineer these genes into the genome of a harmless virus to create a vaccine. Alternatively, identifying and switching off the disease-causing genes in the virus could lead to an attenuated vaccine. In the longer term, these options offer the best chance of halting the march of the virus, says Lubroth. “I wish I had a vaccine.”