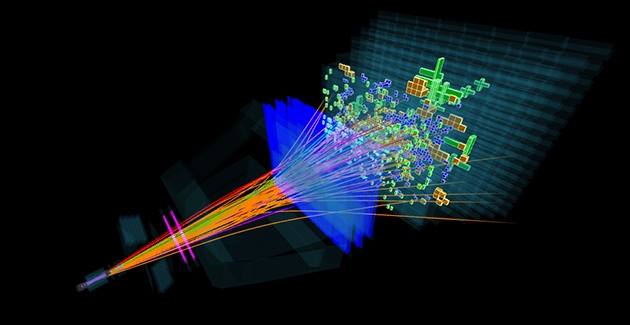 Visualization of a typical event in CERN’s LHCb experiment, with subatomic particles including pions and kaons in different colours.

Science thrives on discovery, so it’s natural for physicists to mourn this week. As the high-energy-physics community gathered in Chicago on Friday, hopes were high (if cautious) that the Large Hadron Collider (LHC) at CERN, Europe’s particle-physics laboratory near Geneva, Switzerland, had chalked up another finding to build on the discovery of the Higgs boson. Not so — the bump in the data that had caused such excitement was washed away with a flood of data that revealed it to be a mere statistical fluctuation.

Ordinarily, physicists would be satisfied if the LHC continued its bread-and-butter existence of confirming with ever-greater precision the standard model — a remarkably successful theory that is known to be incomplete. But the excitement over the bump has left them hungry for more. As is evident from the 500 theory papers written about the bump, physics is ready for something new.

That the LHC has not turned up anything beyond the standard model does not mean it never will. The machine has collected just one-tenth of the data that scientists hoped to amass by the end of 2022, and just 1% of those it could collect if a planned revamp to increase the intensity of collisions goes ahead. But the dry spell worries some. The idea of supersymmetry predicts that heavier counterparts to regular particles will become evident at higher collision energies. Before the LHC was switched on, fans of the theory would have gambled on being able to see something by now. And if the dry spell extends to a drought, high-energy physics could descend into what some call the nightmare scenario — the collider finds nothing beyond the Higgs boson. Without ‘new’ physics, there is no thread to pull to unravel the countless mysteries that the standard model fails to account for, including dark matter and gravity.

There remain strong reasons to build a successor machine. But without another discovery, the public’s delight in high-energy physics could fade: there comes a time when exploration alone no longer satisfies.

Convincing funding agencies to cough up several billion dollars to continue the same approach will therefore be tough, especially when neutrino and lab-based precision experiments cost a fraction of the price. It will be physicists’ job to consider carefully the worth of pursuing that discovery strategy. And if high-energy colliders remain essential, they need to work on their sales pitch.