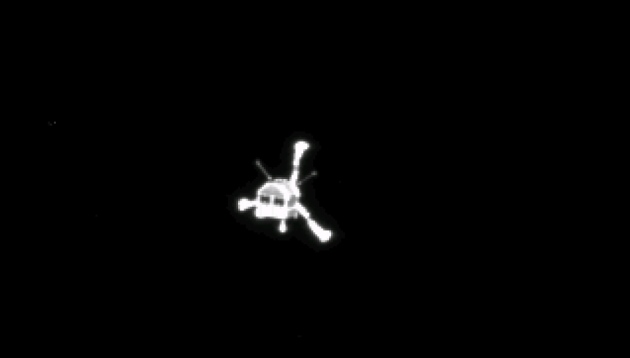 Rosetta's OSIRIS camera captured an image of Philae shortly after the lander began its solo journey to the comet.

Philae, the space probe that made history by landing on a comet in November 2014, has been silent since July 2015 — and is now silent for good.

Philae: life and times of a comet lander

The European Space Agency (ESA) turned off its only means of talking to the lander at 11:00 Central European Summer Time on 27 July, as the probe’s mothership, Rosetta, powered down in preparation for its own demise.

The lander’s Twitter account, @Philae2014, has amassed nearly 448,000 followers — and on 26 July, it sent out a farewell message. “It’s time for me to say goodbye. Tomorrow, the unit on @ESA_Rosetta for communication with me will be switched off forever...”

It’s time for me to say goodbye. Tomorrow, the unit on @ESA_Rosetta for communication with me will be switched off forever...

The lander had a bright but unlucky career. After landing with remarkable precision on the rubber-duck-shaped comet 67P/Churyumov-Gerasimenko, it failed to grip the comet’s surface, and bounced twice before coming to rest in a shady spot where it was unable to charge its solar panels.

Philae was able to perform only 64 hours of experiments before its batteries died and the probe went into hibernation. The lander then briefly spluttered back to life in June and July 2015, as 67P neared its closest point to the Sun and gained more solar power, but it was unable to send back any scientific data about the comet.

Despite its short lifetime, Philae was able to paint a rich picture of its final resting place. It found that 67P has no magnetic field, but some intriguing polymers. It also found the comet to have a surprising combination of a strong, hard crust, covered by a softer layer of dust and ice.

"Considering how many different circumstances Philae had to be designed for, the lander functioned very well. No, we didn’t get everything we hoped for, but I can’t even list all the obstacles Philae overcame successfully," says Valentina Lommatsch, a member of the lander team at the German Aerospace Centre (DLR).

In February this year, ESA scientists said that they suspected that the chances of hearing again from Philae were “close to zero”, but Rosetta kept listening, just in case.

Now some 520 million kilometres from the Sun, Rosetta is quickly losing solar power. To boost power for remaining science operations ahead of Rosetta’s final manoeuvre and crash landing on 30 September, ESA turned off non-essential components, including its interface for communicating with Philae.

Switching off the communications device was not particularly emotional, says Stephan Ulamec, Philae lander manager at the DLR, as the lander team had for months never expected a signal from Philae. The end of Rosetta, on the other hand – which is still active and sending data – will be more emotional, he says.

The level of public interest in the mission has been surprising, adds Ulamec. “It showed how much the general public is fascinated by space missions and solar system exploration.  I hope this also became clear to politicians, making future, bold space missions possible.”

On Twitter, users poured out their goodbyes to the lander. And @Philae2014 sent out a final plea for postcards from home.

I’m far from Earth&Sun!I’d love to take memories of YOU with me. Please send me a postcard from home! #GoodbyePhilae https://t.co/Mh7KdkmsKZ