The US Department of Energy (DOE) is embarking on a US$100-million research programme to investigate what will happen to the 1,500 billion tonnes of organic carbon locked up in frozen soils of the far northern permafrost when they thaw in the rapidly warming Arctic climate.

The programme, called the Next-Generation Ecosystem Experiments — Arctic (NGEE), is designed to develop a fine-scale model that can simulate how soil microbes, plants and groundwater interact on the scale of centimetres to tens of metres, to control the amount of organic carbon stored underground in the permafrost zone. That model will be incorporated into the planetary-scale Earth-system models used to forecast how climate evolves under different emissions scenarios. 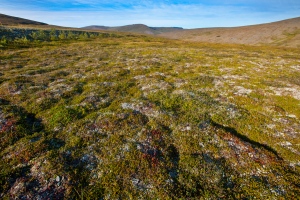 A US Department of Energy project will examine how ecosystems in Alaskan permafrost will respond to global warming — and whether the soil will release its carbon dioxide.

“Our ability to model greenhouse gases and vegetation dynamics is inadequate in today’s environment, and when we think out 50 to 100 years, that entire landscape is going to evolve and be much more complex,” says Stan Wullschleger, the principal investigator for NGEE and a plant ecologist at Oak Ridge National Laboratory in Tennessee.

The programme, which involves about 50 scientists, is a collaboration between the energy department’s national laboratories and the University of Alaska Fairbanks. The project started in October and the team presented its plan to the general geoscience community this month at the American Geophysical Union meeting in San Francisco, California. The NGEE team will set up its first research site near Barrow, Alaska, and will then incorporate other sites in different parts of the state.

The programme is ambitious because it will stretch from the molecular scale up to smallest grid size of the global climate models, which have cells that measure 30–100 kilometres on a side. “This is a large challenge,” says Susan Hubbard, a subsurface scientist at the Lawrence Berkeley National Laboratory in Berkeley, California, who is a co-principal investigator on the project.

The permafrost programme represents a new direction for the US energy department. For much of the past two decades, the DOE's main ecosystem project was the Free-Air Carbon Dioxide Enrichment experiments, in which researchers dosed plots of land with elevated levels of carbon dioxide to see how plants responded. The department announced in 2008 that it was phasing out those experiments.

Ted Schuur, an ecosystem ecologist at the University of Florida in Gainesville who studies Arctic permafrost, says that the DOE programme will inject welcome money and researchers into a field that has lacked both. “They’re bringing a lot of resources to bear on an important problem,” says Schuur, who reviewed the proposal for the programme and serves on the NGEE advisory board.

This year, Schuur and Benjamin Abbott, an arctic biologist at the University of Alaska Fairbanks, polled 41 international permafrost scientists to find out how they think climate change will affect northern frozen soils. The researchers collectively estimated that a warming of 2.5 °C in the Arctic by 2040 could cause the release of between 30 billion and 63 billion tonnes of carbon (see High risk of permafrost thaw). Current global emissions of carbon from burning of fossil fuels, deforestation and other human activities total more than 10 billion tonnes per year.

Researchers are particularly concerned that thawing permafrost will release carbon in the form of methane, a greenhouse gas far more potent than carbon dioxide, which could accelerate warming of the entire globe. “The carbon stored in permafrost soils has been identified as one of the more likely positive feedbacks to climate change, but the scope and magnitude of that is pretty uncertain at the moment,” says Schuur.

Charles Tarnocai, a research scientist with Canada’s Agriculture and Agri-Food ministry in Ottawa, says that his only reservation about the NGEE programme is that the field research is being conducted only in Alaska. “The information generated by this project provides data for only the Low Arctic areas, not for the huge area north of this,” he says.

Wullschleger says that the NGEE programme will eventually bring in international partners and expand to include Arctic areas outside Alaska.