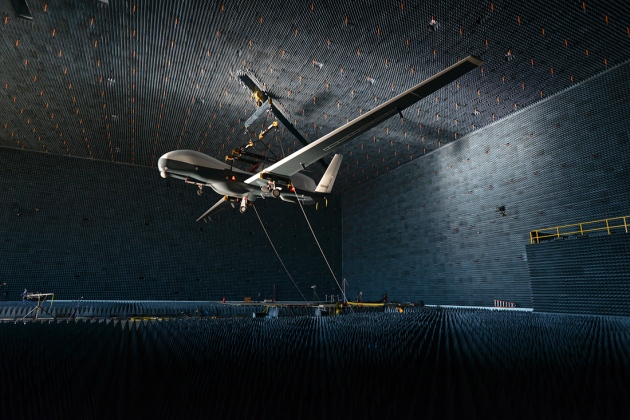 Marine surveillance drones are likely to be among the technologies funded by a new EU research fund.

Faced with a changing world order and buffeted by a slew of political crises and terrorist attacks, the historically civilian European Union is bolstering its military capabilities. And that means making its first major investment in military research.

The research portion of the fund will cover electronics, advanced materials, encrypted software and robotics. The European Commission, the EU’s policymaking arm, expects to invest a total of €90 million by 2020. It hopes the figure will rise to €500 million a year for defence research from 2021. The sum is dwarfed by the EU’s major research-funding programme, Horizon 2020, which will hand out €80 billion over 7 years, the €8.8 billion spent by EU member states on defence research in 2014, and what the United States and probably China spend on defence research (see ‘Military metrics’).

But some scientists fear that funding defence research is a step in the wrong direction for the EU. “It will necessarily divert much-needed funding from civilian R&D budgets, at a time when they are urgently needed for areas such as climate and energy,” says Stuart Parkinson, executive director for UK-based advocacy group Scientists for Global Responsibility.

One of the EU’s main objectives is to promote peace. In the past, defence was seen as a national issue rather than something for the bloc to handle. The decision to create the research fund is in part driven by a drop in national defence-research funding, which declined by 18%, or €1.9 billion, between 2006 and 2014 in real terms, according to the European Defence Agency (EDA) in Brussels, which will manage the research fund on behalf of the commission. 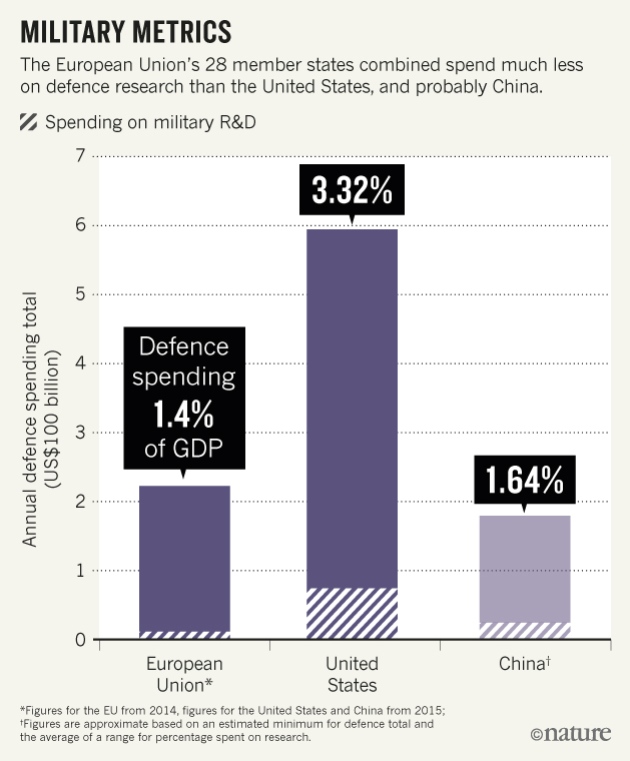 The perception that international security is under threat is a driver for the broader defence fund. In November, the European Parliament passed a motion that says terrorists are targeting the continent on an unprecedented scale, and that Europe is “now compelled to react to an arc of increasingly complex crises”. The motion notes that for the first time since the Second World War, “borders in Europe have been changed by force” — referring to the annexation of Crimea in 2014 and the incursion into Ukraine by Russian forces.

In September, Jean-Claude Juncker, president of the commission, made a similar point when speaking about the European Defence Fund. “Europe can no longer afford to piggy-back on the military might of others,” he said.

The rules for participating in the research fund are still being discussed, but it will be modelled loosely on Horizon 2020. It will probably promote projects that combine researchers from industry and academia and from different countries, says Denis Roger, a director in charge of research at the EDA.

But whereas researchers on Horizon 2020 projects are expected to publish their results, or to patent products for anyone to license, the commission is likely to restrict how the results of defence-fund research are publicized, classifying some and restricting licensing to national ministries. The EU has no army of its own — although Juncker has said he would like to create one. Instead, national ministries, alongside members of the defence industry, will be involved in setting priorities for the scheme, says Roger. And unlike Horizon 2020, which welcomes participation from more than a dozen ‘associated’ countries, the research defence fund is likely to be open only to EU member states and Norway.

The project could boost certain fields. Roger says it will include research into metamaterials, which are made of tiny structures that manipulate the path of light and could potentially hide objects from radar, as well as methods of energy storage, flexible radio antennas that can be incorporated into clothing, and prototype maritime surveillance drones.

“I would imagine that a lot of countries would definitely see this as another opportunity for funding,” says Ortwin Hess, a physicist at Imperial College London. He notes that US scientists working on photonics and metamaterials can readily access defence funding. “My US colleagues wouldn’t survive without it. They live on it.”

Hess, who has received defence funding from the US and UK governments in the past, says he is a realist when it comes to what he calls the moral question. “I have to accept that our society has values that deserve to be defended,” he says. The military will adopt technologies developed in the civilian domain, and sometimes technology transfer can go the other way, he adds.

But Parkinson says that defence research often supports military efforts beyond actual defence, as well as the export of weapons to other countries: “Our view is that we need a much stronger focus on R&D which contributes to tackling the root causes of conflict — including a range of social and environmental problems.”