To William Shakespeare, brevity was the soul of wit. For scientists, it may be even more valuable, as conciseness seems to correlate with how frequently a research paper is cited.

Adrian Letchford and his colleagues at the University of Warwick in Coventry, UK, analysed the titles of 140,000 of the most highly cited peer-reviewed papers published between 2007 and 2013 as listed on Scopus, a research-paper database. They compared the lengths of the papers’ titles with the number of times each paper was cited by other peer-reviewed papers— a statistic sometimes used as a crude measure of importance.

As they report in Royal Society Open Science1, “journals which publish papers with shorter titles receive more citations per paper”.

The impetus for the current study came from a desire to pen better papers, says Letchford, and to see whether good writing is rewarded in research. “As scientists, we’re all cursed,” when it comes to writing, Letchford says, as researchers hone their specialised knowledge but often cannot explain themselves to readers outside their own field.

Previous research has come to conflicting conclusions on the link between title length and citations2, 3. And Letchford admits that their paper is merely a 'proof of concept' that does not show that shorter titles lead to more citations.

Among the possible confounding factors is that not all journals have the same standards for title lengths. Papers published in Science, which average more than 30 citations, are limited to titles of 90 characters, whereas the Public Library of Science journals, where papers generally attract fewer citations, allow up to 250. To account for some of these differences, Letchford also compared the number of citations for papers published in the same journal and found that the pattern held true. 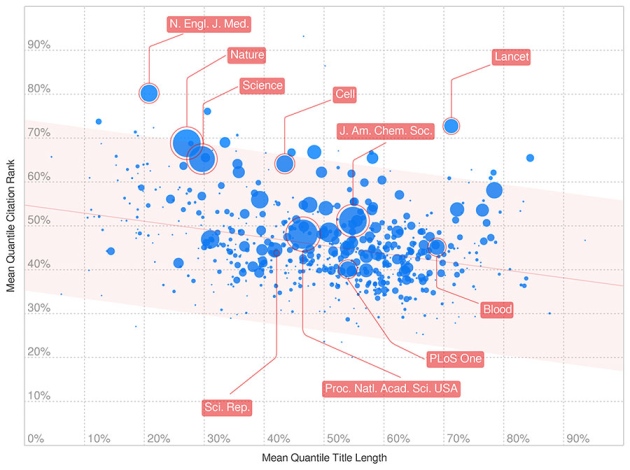 However, Letchford and his team did not investigate the possible effect of factors such as subject matter, seniority of authorship or other aspects of a paper that affect its citation rate. John Mingers, a bibliometrician at the University of Kent's business school in Canterbury, UK, says that even if there is a relationship between title length and frequency of citation, a more rigorous analysis might have found the importance of that association to be very slight. There might simply be more citations in fields where it is standard to write shorter titles, for example. “They have used a large dataset, which is good, but there are problems, and what you can conclude from these results is very limited,” he says.

Regardless of whether they influence citations, clear, tightly constructed titles are in authors’ best interests, says Karl Ziemelis, Nature’s chief physical sciences editor, as they can improve the chances of a paper being discovered by readers and encourage them not to pass it over. “I find that snappier ones catch my attention more,” agrees Meghan Byrne, a senior editor at PLoS One.

John Ioannidis, an epidemiologist at Stanford University in California, who studies scientific publishing, says the work is “a cute paper, but I don’t really trust the results to be conclusive”.

He adds, “I will continue to struggle finding appropriate titles for my papers without worrying about whether the title length may affect their citations.”

But the study has already influenced at least one piece of writing. Given their findings, Letchford says that the research team spent quite some time on naming their paper.

“After all that, we thought, ‘we’d better give it a good title,’” he says.

They chose "The advantage of short paper titles".