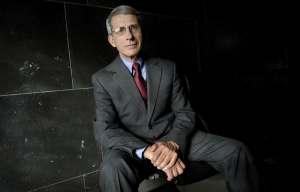 As director of the US National Institute of Allergy and Infectious Diseases, Anthony Fauci oversees much of the flu research in the United States.

Insights from research that has created strains of the H5N1 avian flu virus that are highly transmissible in mammals might help to improve pandemic preparedness in the future. But concerns have been raised that the publication of such work would amplify the risk of an accidental, or intentional, release of the virus that could spark a human pandemic. Flu researchers working on such studies last week declared a 60-day voluntary pause to allow governments and other bodies “time to find the best solutions for opportunities and challenges that stem from the work" (see 'Pause on avian flu transmission studies').

Anthony Fauci is the director of the US National Institute of Allergy and Infectious Diseases in Bethesda, Maryland, which funds much of flu research, including such H5N1 transmission studies. He tells Nature about his hopes for a meeting to be hosted by the World Health Organization in Geneva, Switzerland, next month, at which flu experts will come together to consider the many thorny issues raised by such research, and how best it might safely proceed. It as part of an ongoing international effort to establish a framework for global oversight of research that increases the transmissibility of the H5N1 virus, and the data it generates.

The research community seems to be deeply split on the relative risks and benefits of such flu research. How will this meeting help?

The degree of polarization in the scientific community is unprecedented, and that has motivated me to push very, very hard for transparent, open discussion of these issues. We need to get people in the same room discussing the pros and cons rather than having duelling soundbites. That doesn't help anybody.

There have been understandable concerns that the discussion so far has been behind closed doors, and is being dominated by the United States. I have been very uncomfortable with that perception, so I have been pushing to hold this international forum. The US government really does not want to, and should not, totally drive a debate that involves global health and international issues, scientists and laboratories.

Some researchers have suggested that such research on the H5N1 virus might let scientists scan flu viruses in animal populations for these mutations conferring mammalian transmissibility and get early warning of, or avert, a pandemic. But is that realistic?

How would one translate knowledge of mutations into a practical capability to spot their evolution, when there is very limited surveillance, we have few sequences of animal H5N1 virus isolates and it takes a really long time to get them? That is a problem, but it doesn't necessarily negate the potential importance of such knowledge, should we get the ability, perhaps through specialised centres, that could do much more extensive sequencing of sample viruses from outbreak areas.

These are exactly the types of conversations that I hope will take place at foras in the coming months, including that next month. I think that one of the indirect, almost unintended, benefits of the controversy over this research is that it is getting people to focus on the weaknesses of how we are currently addressing the H5N1 threat. Proving that the virus can become highly transmissible may mean that we will start taking seriously the failings and gaps in our surveillance capability.

Are we in danger of paying too much attention to just the sets of mutations highlighted by the recent research, when there are many others to worry about?

Having a menu of mutations that many studies indicate are usually associated with some increase in transmissibility is important knowledge to have. But it's true that if you focus in only a narrow way on those, you may miss the mutation that is really important. I use the metaphor that the bullet that kills you is the one you don't hear. But that doesn't rule out the fact that knowing about these mutations may be helpful.

Are there any areas where you would say there is an immediate public-health benefit that can be had from this research?

If there were major, immediate, public-health benefits to this research, higher risks might be acceptable. But if any potential benefits are years down the line, shouldn't we take our time to get regulation of this right?

I totally agree with you, and that's why I am very much in favour of the pause in such research. What is the rush? As I pointed out in a commentary that I wrote for The Washington Post, there are potential advantages to having the information from this research, but my positive inclination for these types of studies, is more in expanding the envelope of understanding of the interface between animal and human influenza, and the biological context in which species adaptability and transmissibility occurs.