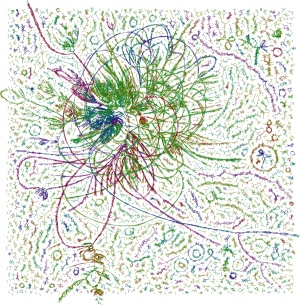 From this entangled mass of assembled metagenomic DNA sequences of bacteria, archaea and viruses, researchers picked out the complete genome of the mysterious Euryarchaeota.

At long last, researchers may be able to sequence the genomes of any microbe, even ones they can't grow in the lab.

Until now, researchers had just two main ways to sequence their genomes. They could sequence the genome directly, but that required growing the organism in culture to a manageable level, and that has not been possible for most microbes. Alternatively, they could use a technique known as metagenomics, and try to pick out DNA that belongs to the microbe from the vast amount of genetic material present in an environmental sample. That method, however, works only if the organism is the dominant member of a simple community or if it or a close relative has had its genome sequenced before that could serve as a blueprint.

But in Science today1, researchers from the University of Washington in Seattle show that, with the right computational tools, they can extract individual genomes from the slurry of genetic material in a sample, even if the organism hasn't yet been grown in culture.

“Our approach is exciting because it finally opens up a window to determine how entire microbial communities work,” says study co-author Virginia Armbrust.

Armbrust and her colleagues collected cells from samples of surface water taken from Puget Sound, an ocean inlet in Seattle. Using a metagenomics approach, they were able to identify fourteen likely genomes in the DNA from those cells, two of which they assembled into complete genomes. One of those genomes came from the Euryarchaeota, a widespread group of marine microorganisms, none of which have been grown in culture or sequenced.

Using next generation sequencing, the massive number of DNA fragments extracted from the water sample can be stitched together to produce an intact metagenome.. But because the sequencers were developed primarily to compare samples with the human genome, the tools didn't exist to tease out individual genomes from the mix.

To extract individual genomes, Armbrust’s PhD student Vaughn Iverson exploited skills that had he gained as a computer scientist designing video compression technology at Intel in Portland, Oregon. He developed a computational method to break the stitched metagenome into chunks that could be separated into different types of organisms. He was then able to assemble the complete genome of Euryarchaeota, even though it was rare within the sample. He plans to release the software over the next six months.

It’s a different tack from that taken by early marine metagenomics efforts, which began in earnest with Craig Venter’s Global Ocean Sampling effort in 20032. “Our survey offered a broad-stroke picture of microbial diversity and the dominant players in the world’s oceans,” says Kenneth Nealson, director of the microbial and environmental genomics group at the J. Craig Venter Institute in San Diego, California. “This clever approach demonstrates that they can pull out the sequence of uncultured organisms — information we need to get a clue as to how microbes share limiting resources in the ocean.”

The new tools will be eagerly received by biologists. Eric Allen, a marine molecular biologist at Scripps Institution of Oceanography in La Jolla, California, who is exploring similar approaches, says they will lead to a “new era” in metagenomics. “Theoretically, every microbe’s genome is now in the queue.”

Although it made up just 7.5% of the Puget Sound sample, Euryarchaeota is of great interest. “This has been a mysterious group of microorganisms which, until now, offered few clues to its ecological role,” says Armbrust. Its genome holds clues that its members are mobile and stick to particles while looking for proteins and fats to degrade.

Whether having its genomes in hand will help to grown it in culture remains to be seen, but it is now a possibility. “We’ve never even held a member of Euryarchaeota, but we have its genome and clues to its metabolism — which will help us to figure out the magic elixir to get them into culture,” says Armbrust. Iverson fully expects it to be cultured in the near future. “I have no doubts we’ll eventually crack this one,” he says.