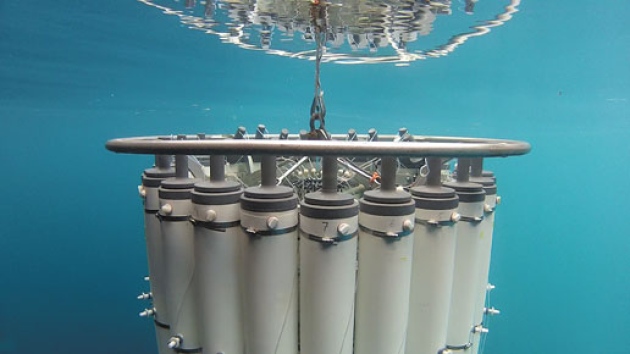 An instrument of the California Cooperative Oceanic Fisheries Investigations survey profiles ocean conditions off the US west coast.

Next year, the United Nations aims to complete its first World Ocean Assessment, a process akin to the regular reporting of the Intergovernmental Panel on Climate Change. The assessment is timely and crucial: the world's oceans are threatened by many anthropogenic stressors, from pollutants, nutrient runoff and overfishing to warming, deoxygenation and acidification1. Current ocean-observation programmes are not fit for purpose.

Variables such as temperature, salinity and chlorophyll levels are monitored globally by satellites, water-column-profiling floats and moored sensor arrays. Ecological monitoring of marine systems, by contrast, is woefully inadequate and has been too long dismissed as too hard and too costly. As a result, the phytoplankton, zooplankton and micronekton (krill and small fish) that comprise the bulk of ocean ecosystems are examined on an ad hoc basis, rather than systematically.

Most natural ocean processes vary on annual to decadal timescales. To identify shifts resulting from climate change, observations need to span 50 years or more. Neglect of ecological monitoring has left the ocean-science community effectively bereft of such long-term data. The Census of Marine Life, for example, is an international effort that aims to characterize marine biodiversity, but over only a decade. Today, there are just two ecological data sets that are sufficiently long to fit the bill — and each has limitations.

A global ocean-observation network needs to be established within the next five years to provide baselines against which ocean health can be assessed in the coming century. Alongside physical oceanographic data, such a network must track the status of species in marine ecosystems around the world.

Ecological time series are the Cinderellas of ocean science: long-neglected drudges, eking out their existence at the edge of what is in fashion, they now find themselves in favour at the climate change ball.

Their dismal state was brought home last year when one of us (J.A.K.) reported2 a 63% decline in the abundance of 24 species of mid-water (mesopelagic) fish off the coast of California, apparently in response to reduced oxygen levels at those depths (200–1,000 metres). The study2 was based on ecological and oceanographic time-series data from the California Cooperative Oceanic Fisheries Investigations (CalCOFI), which has sampled the waters off southern California since 1951. The results had wide ramifications.

Reduced oxygen levels at mid-ocean depths are a predicted consequence of global warming, because temperature affects ocean stratification, mixing and ventilation3. Southern California waters contain a diverse mix fish species, the habitats of which extend to both the cooler northern Pacific and warmer subtropical waters. On setting up a special session at the 2012 annual meeting of the North Pacific Marine Science Organization to examine trends across the northern Pacific, where similar oxygen declines had been reported4, 5, it emerged that there are no other time-series data sets for the mid-water fauna.

Monitoring what happens at mid-ocean depths is crucial for judging marine health. This layer is the metabolic engine of the ocean: 90% of the organic matter that sinks from the surface is processed there. Many more species of fish live at mid-ocean depths than near the surface. The global biomass of mesopelagic fishes is estimated to be 1 billion–10 billion tonnes — more than an order of magnitude greater than that of commercial marine fish landings, which is less than 100 million tonnes6.

Many fishes reside at mid-water depths in the day to avoid predators, and rise towards the surface to feed at night in the largest animal migration on Earth. As major consumers of zooplankton and prey of higher predators, mid-water fishes are a key vector in the transport of carbon to the deep ocean.

So, why are there so few time series for marine ecosystems? Most ocean observations come from coastal or fishery programmes. Coastal stations record quantities that are easy to measure from a pier (temperature, salinity and chlorophyll), are crucial to water quality (algae, nutrients and oxygen levels) or conditions that are relevant to local shipping (winds, waves and currents). Fishery surveys focus on commercially exploited species. Most oceanographic sampling is limited to variables that can be measured routinely from ships, moorings, gliders and floats.

In the 1990s, the Global Ocean Observing System (GOOS), developed by the UN's Intergovernmental Oceanographic Commission, held out promise for a worldwide monitoring network. But funding has limited its achievements to predominantly physical measurements — the low-hanging fruit. As part of the open-ocean GOOS programme, the Argo project successfully seeded the world's oceans with some 3,000 floats to profile temperature and salinity. But the coastal GOOS programmes focused on easy observations and local hazards.

Few GOOS operations are systematic. The United States, for example, is served by 11 regional associations, each with its own instrumentation. Assessments speak of the lack of ecological observations as a persistent 'gap' in the programme7. In November, GOOS will be holding its first Expert Workshop in Townsville, Australia, to establish panels to cover biogeochemistry, and biology and ecosystems. The need is pressing.

Thanks to Argo and satellites, there is now excellent coverage of temperature, salinity and chlorophyll for a good proportion of the world's oceans. But there are still few ecological time series, in particular species-level data for the plankton that form the base of marine food webs.

Plankton can be surveyed using simple technology. Some of the strongest evidence of climate-linked changes in zooplankton abundance has come from the Continuous Plankton Recorder (CPR) survey of the North Sea and north Atlantic, dating to 1946. The rugged CPR instrument (originally brass but now stainless steel) samples the plankton while being towed by merchant ships on regular routes. The plankton are embedded on a silk strip and spooled into a tank of the preservative formaldehyde, then their species identified. The resulting time-series data have proved to be a treasure trove for understanding the ebb and flow of plankton and fish populations in relation to natural climate oscillations in the north Atlantic and to climate warming8.

The longevity of the CPR programme is due to its simplicity. CalCOFI, conversely, is a comprehensive project that endeavours to monitor the oceans from 'winds to whales'. As a joint programme between the Scripps Institution of Oceanography in La Jolla, California, and the state and federal agencies responsible for fisheries since 1949, CalCOFI's quarterly acoustic and egg and larval surveys provide data to assess commercial species such as sardine, anchovy and hake.

From the outset, the CalCOFI surveys have been embedded in a suite of observations of the fishes' physical and biological environments. They yield much of our understanding of how the California Current ecosystem responds to drastic fluctuations in temperature and productivity caused by the El Niño cycle, an abnormal warming of ocean waters in the eastern tropical Pacific, as well as to decadal changes in ocean currents and to climate change9.

As well as CPR and CalCOFI, there are notable programmes being set up or expanded. These include the Japanese Odate project, which analyses zooplankton collections off the coast of Japan for their species composition. But it remains to be seen whether these programmes will run long enough to identify climate-related changes.

Today, the ocean-science community is in the embarrassing position of being asked to assess the state of the world's oceans but lacking the means to do so. Yet it is technically and economically feasible to develop multidisciplinary programmes along the lines of CalCOFI that simultaneously meet marine-management, conservation, scientific and infrastructure needs.

The CalCOFI programme costs about US$5 million a year. Instituting similar initiatives globally to cover the roughly 50 large marine ecosystems that characterize the bulk of ocean life10 would amount to about $250 million a year. If efforts were coordinated across existing fisheries and environmental-monitoring schemes, the extra cost would be lower.

The United States would need only to find $30 million a year to monitor its six large marine ecosystems. This amount approaches the projected $55-million yearly running cost of the US Ocean Observatories Initiative (OOI), the $386-million infrastructure cost of which has been agreed by the US National Science Foundation. From 2015, the OOI will provide a range of physical, chemical, geological and biological observations for a few slices of the ocean over 25 years, but only a few of the species-level observations that are required to assess ecosystem status.

The impending World Ocean Assessment makes clear that the ad hoc ocean-monitoring arrangements developed since the mid-twentieth century are poorly suited to current needs. Ecological baselines need to be established and time series maintained. This essential task is neither too difficult nor too costly. We hope that the upcoming GOOS workshop will mark a watershed.