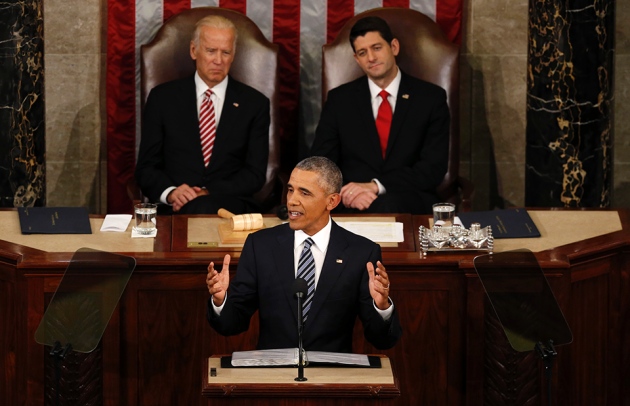 US President Barack Obama's term in office ends in January 2017.

US President Barack Obama isn’t going quietly. He began his final year in office by announcing a “moonshot” to cure cancer in his State of the Union address to Congress on 12 January.

The effort will be led by vice-president Joe Biden, whose son Beau died of brain cancer last year.

“For the loved ones we’ve all lost, for the family we can still save, let’s make America the country that cures cancer once and for all,” Obama said in a soaring speech that otherwise offered few new proposals. Instead, the president spent most of the address looking back at his accomplishments over roughly seven years in office.

The details of the cancer moonshot are still fuzzy. Biden says that he has consulted with nearly 200 physicians, researchers and philanthropists in the past few months and plans to continue to seek such input. Thus far, he has pledged to increase the resources available to combat the disease, and to find ways for the cancer community to work together and share information. The goal is to double the rate of progress against cancer, achieving in five years what otherwise would have taken ten.

The vice-president also pointed to what he sees as key problems that must be tackled. Only 5% of people with cancer participate in clinical trials, he noted in a statement released during the State of the Union speech, and many community oncologists have limited access to the latest treatment advances.

Biden’s commitment to the programme, which he first hinted at three months ago, has been hailed by patient advocates, researchers and the biotechnology industry. Advances in cancer therapy, including treatments that harness the immune system and target specific tumour mutations, have brought cancer research to an inflection point, says José Baselga, a cancer researcher at the Memorial Sloan Kettering Cancer Center in New York City and president of the American Association for Cancer Research.

“Now is the time for a major new initiative in cancer science that supports and builds upon our basic science foundation,” Baselga says.

He also showed little patience for those who are sceptical about the idea that human activities are changing the climate.

“If anybody still wants to dispute the science around climate change, have at it,” Obama said. “You’ll be pretty lonely, because you’ll be debating our military, most of America’s business leaders, the majority of the American people, almost the entire scientific community, and 200 nations around the world who agree it’s a problem and intend to solve it.”

Scientists and environmentalists say that the president has done what he can to craft a comprehensive climate policy in the face of Republican intransigence. Most notably, his administration has advanced regulations to make vehicles more energy efficient and to curb pollution from existing and future power plants. On the international front, Obama has committed the United States to reduce its greenhouse-gas emissions to 26% below 2005 levels by 2025 and helped to secure a new global climate agreement at the United Nations climate summit in Paris last December.

But Obama has yet to bridge the national political divide on climate issues. And with one year left in office, he has little leeway to propose any major initiative to fight global warming. In his address, the closest thing to a commitment was a promise to “change the way we manage our oil and coal resources, so that they better reflect the costs they impose on taxpayers and our planet”.

“Overall, the speech raises climate change to the highest level of importance but leaves the listener hungry for specifics about how to move forward to get the job done,” says Michael Oppenheimer, a climate scientist at Princeton University in New Jersey.

David Victor, a political scientist at the University of California, San Diego, noted that Obama has succumbed to the probably unrealistic notion that deploying clean energy and reducing greenhouse-gas emissions will save money, rather than raising the cost of energy. “Almost no serious analyst actually believes that,” Victor says.

But he credits Obama with stressing both technological innovation and international cooperation — even if the president did not specifically refer to the UN climate agreement reached in Paris. “Most presidents come into office focused on national policy challenges, and they leave having spent a huge fraction of their time on foreign matters,” Victor says. “For this president, climate is among them.”