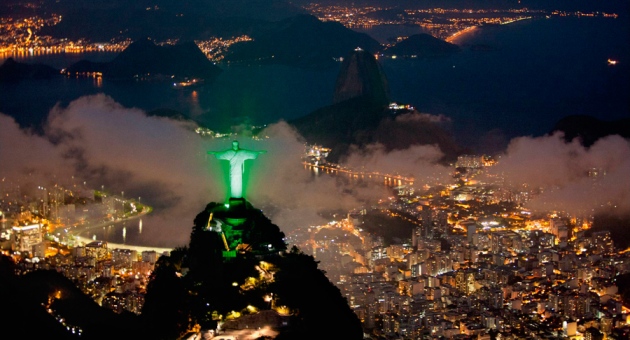 Rio de Janeiro's iconic statue of Christ has gone green to celebrate the Earth Summit taking place there  — but critics wonder if the agreement that emerged today is beyond redemption.

In the run-up to the Earth Summit taking place in Rio de Janeiro this week, Brazilian officials on 19 June unveiled a text agreed by negotiators that looks set to become the final agreement to emerge from the meeting. The 49-page document, which touches on all of the major issues surrounding sustainable development but requires very little in the way of concrete commitments from governments, will be taken up by world leaders when they gather at the 20–22 June Rio+20 meeting.

Environmentalists immediately blasted the text, saying that only heads of state and other high-level officials could now avert a “colossal failure” at the meeting. But most observers and government negotiators acknowledge that there will be little appetite among global leaders to launch another set of negotiations when they arrive in Rio this week. Brazil championed the document as a final accord, and the United States warned that the delicately woven agreement could unravel if leaders start pulling on loose threads.

In an extensive briefing late on Tuesday afternoon, Brazilian officials said that the agreement builds on what was achieved at the first Earth Summit 20 years ago and provides “a new vision for the future”. They added that the agreement re-emphasizes social development as one of the fundamental pillars of global sustainability, along with economic development and environmental protection.

The agreement covers a wide range of territory from the environment, poverty and social justice to the pursuit of a nebulous green economy. It seeks to make countries work to alter consumption patterns and to formally investigate a way of calculating economic progress — one that takes environmental degradation and social woes into account. It also calls for the establishment of a set of “sustainable development goals” to replace the expiring Millennium Development Goals in 2015. But in stark contrast to the original Earth Summit in 1992, where governments signed two treaties and laid the groundwork for a third, all of the language is voluntary and any real decisions are invariably put off for another day.

Nobody was expecting any major treaties to come out of the Rio+20 meeting, in part because of a sense that the world has no shortage of treaties and commitments already. But for environmentalists, the agreement falls short of even the lowest expectations. “There’s a lot of content, but there’s no commitment,” says Samantha Smith, who heads the WWF Global Climate and Energy Initiative in Oslo, Norway. Smith says that the agreement highlights and reinforces the deep distrust between developing and developed countries as well as the resulting scepticism about multilateral treaties. Developing countries feel particularly stung by repeated failures of the industrialized countries to deliver on promises of aid, she says. If leaders simply sign off on the agreement as it stands, she says, “it’s time for a serious think about the purpose of such a powerless process”.

The drafted text reveals the difficulty facing negotiators as they try to craft language around even seemingly benign and non-controversial issues. For example, fearing that references to a “green economy” could hamper efforts to grow their economies and lift citizens out of poverty, developing countries objected to any mention of the idea unless it was followed by the phrase “in the context of sustainable development and poverty eradication”.

Similar fears caused developing countries in the Group of 77 negotiating block to oppose Europe’s proposal to insert a reference to ‘planetary boundaries’ in the text. The concept of planetary boundaries, first suggested in Nature in 20091, proposes to establish quantitative global thresholds that should not be exceeded in nine areas, including global warming, biodiversity and nitrogen and phosphorus cycles. Although not all scientists believe the idea of planetary boundaries is ready for prime-time politics, many attending Rio supported the idea of including some kind of reference to physical limits on Earth’s resources and human activities. “The science tells us that Earth’s resources, upon which we depend, cannot meet the continued demands of humanity,” says Katherine Richardson, a marine biologist at the University of Copenhagen.

Environmentalists cited at least one small victory: the agreement calls for an integrated ocean assessment and sets up a process for negotiating a protocol governing the high seas under the United Nations Convention on the Law of the Sea, both to be completed by 2014.

But in the end, the text includes no mention of boundaries or limits, stressing only the need to integrate science and policy frameworks while calling for “a regular review of the state of the Earth’s changing environment and its impact on human well-being”.

Many of those participating in Rio+20 put the summit in a more positive light. And despite growing doubts about the power of international treaties to effect change, observers are taking heart in the steps that some countries are taking at the national and sub-national level. Brazil is a good example, having sharply reduced deforestation in recent years while developing the world’s most advanced biofuels industry and simultaneously helping to lift millions of people out of dire poverty.

Janos Pasztor, executive secretary of the UN High-level Panel on Global Sustainability, says that the conference has helped spur a broader conversation about sustainable development as well as a host of initiatives among governments, civil-society groups, scientists and the private sector. “This conference is part of a larger process,” Pasztor says, “and the outcome document is just one of the many results that will be announced here in Rio.”