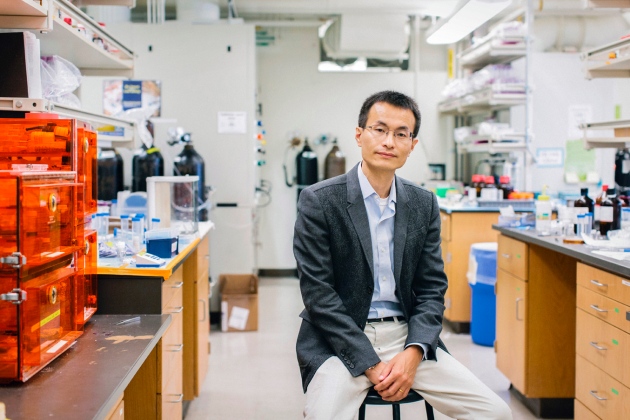 Peidong Yang, a chemist who is building nanowires into commercial applications — such as devices that generate fuel from solar energy, or convert waste heat into electricity — is one of nine US researchers to win a ‘genius grant’ this year from the philanthropic MacArthur Foundation in Chicago, Illinois.

The awards, announced on 29 September, give US$625,000 of “no strings attached” funding to creative and inspiring individuals in any field, paid out over 5 years.

Yang, at the University of California, Berkeley, helped to build a device that uses nanowires and bacteria to absorb solar energy and convert carbon dioxide and water into fuel. His research has also been used to make chemical sensors and optical switches.

Other science- and social-science-related winners of this year’s fellowships are listed below.

Beth Stevens, a neuroscientist at Harvard Medical School in Boston, Massachusetts, discovered that cells in the brain known as microglia play the crucial role of pruning back neurons as the brain develops. Her work could help in understanding how neurodegeneration occurs in disorders such as Alzheimer’s disease.

Christopher Ré, a computer scientist at Stanford University in California, created DeepDive, a data-analysis engine that pulls out information from vast tracts of data. His software has been used to analyse human-trafficking networks on the web, identify interactions between genes and prescription drugs and construct fossil databases directly from research papers.

John Novembre, a computational biologist at the University of Chicago, works on understanding human ancestry from genetic data. He has created a detailed map of genetic diversity in African Americans, and has mapped out the rare genetic variants that riddle human populations.

Kartik Chandran, an environmental engineer at Columbia University in New York, works on alternative ways to treat wastewater. He uses microbes to help clean the water and produce valuable byproducts such as biofuels. He has tested his projects on the ground in Ghana.

Lorenz Studer, a stem-cell biologist at the Memorial Sloan-Kettering Cancer Center in New York, is leading efforts to transplant neurons into the brain, with the hope of replacing cells that die in neurodegenerative conditions such as Parkinson’s disease.

Heidi Williams, an economist at the Massachusetts Institute of Technology in Cambridge, looks at the drivers of innovation in health-care markets. She focuses on the influence of patents and intellectual-property laws, and has examined the race between public and private institutions to decode the human genome.

Matthew Desmond, a social scientist at Harvard University in Cambridge, studies the impact of eviction on poor people living in urban areas. His research has led to policy changes that help victims of domestic violence.