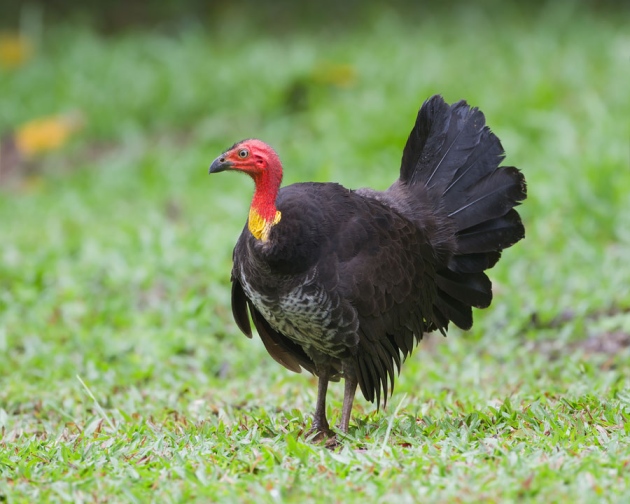 The eggs of the Australian brush turkey (Alectura lathami) repel moisture that can harbor harmful microbes.

Australian brush turkeys incubate their eggs where few might — in moist piles of rotting vegetation. The eggs are kept warm by the heat generated as microbes in the soil and compost decompose organic matter, but those same microbes can also get through eggshells and kill the embryos.

Despite the risk, infections occur in only about 9% of eggs laid by Australian brush turkeys (Alectura lathami). Now researchers think they know why: the shells are covered in a layer of nanometre-sized spheres of calcium phosphate, which makes them more water-repellent than chicken eggs and helps them to fend off bacterial attachment and penetration. The results, published this month in the Journal of Experimental Biology1, could one day lead to new antimicrobial coatings for plastics and other surfaces.

Most eggshells create a tough barrier for pathogens to crack, and microbes that succeed encounter an antimicrobial enzyme called lysozyme, found in the whites of bird eggs. But brush-turkey eggs have roughly the same amount of lysozyme as chicken eggs, and their shells are 1.5 times thinner than those of chickens, which should make them more susceptible to invading microbes, not less.

The key difference between the turkey and chicken eggs, the researchers found, is the turkey eggs’ extreme ability to repel water. Droplets of water that were absorbed by chicken shells beaded up on the turkey eggs’ surface, which is made hydrophobic by the layer of naturally occurring calcium phosphate nanospheres. Because microbes are usually transmitted into eggs by moisture, resistance to water absorption is likely to have a key role in protecting brush-turkey chicks.

“The lotus leaf is considered the most hydrophobic material in nature,” says first author Liliana D’Alba, a behavioural ecologist at the University of Akron, Ohio. “These eggshells are pretty close to that, to being super-hydrophobic.”

Tests revealed that more than three times as many bacteria adhered to chicken eggs as to the brush-turkey shells. Two bacterial species, Pseudomonas aeruginosa and Escherichia coli, infiltrated chicken shells within 2 to 6 days of contacting their surfaces, but required significantly more time to enter brush-turkey eggshells.

The calcium phosphate nanospheres found in this species' eggs seem uncommon — preliminary observations have not revealed similar structures in the eggs of other species. However, a 1982 study2 described similar nanospheres in the eggs of malleefowl (Leipoa ocellata), another Australian bird that nests in soil mounds. In the future, D’Alba plans to study how diverse nesting environments may have shaped the shell composition of other birds or reptiles.

Understanding how the nanospheres work could help to create better antimicrobial coatings for use on a wide range of materials, according to study co-author Matthew Shawkey, an evolutionary biologist at the University of Akron.

Hincke suggests that future work in this area may lead to innovative biomedical applications. “Hydrophobic nanoparticles on the surface of medical devices could change the way bacteria adhere or form biofilms,” he says.