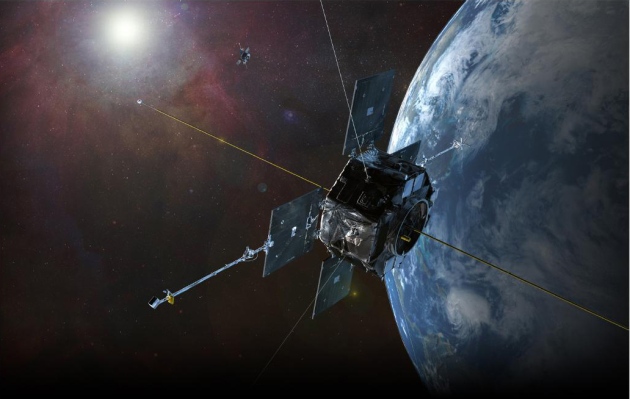 NASA's Van Allen Probes have demonstrated that the Van Allen belts replenish themselves just days after a solar storm has blown their charged particles away.

The two concentric rings of high-speed particles that encircle the Earth are finally giving up the secrets of their origin — 55 years after their discovery. Two NASA probes have found evidence that the Van Allen belts, as the rings are known, are responsible for accelerating the particles, rather than collecting energetic particles that originated elsewhere. Space scientists think that their latest findings1 could also account for the even more energetic belts circling Saturn and Jupiter, as well as high-energy radiation associated with worlds beyond the Solar System and even some Sun-like stars.

For several years after 1958 — when space scientist James Van Allen and his colleagues identified the radiation belts that now bear his name, using instruments aboard the first US space mission — researchers theorized that the rings’ electrons came from distant reaches of Earth’s magnetosphere, the bubble of space dominated by the planet’s magnetic field. They proposed that as the particles drifted closer to Earth and encountered stronger magnetic fields, they would accelerate and settle into a ring-like configuration.

But this type of acceleration process would take days to weeks and best describes radiation belts that vary only gradually over time. In the 1990s, satellites began to reveal that the energy and density of the Van Allen belts changed more quickly. As a result, a competing theory for the origin of the belts' electrons began to take hold: that charged particles do not come from afar, but are produced locally, when electric fields within the belts rip electrons off from wandering atoms and accelerate those electrons to nearly the speed of light. This process could alter the density and energy of the belts on scales of seconds to hours, a theory that matched better with the observations from the 1990s.

However, the satellite observations were still too sparse and the craft were not designed to measure rapidly changing properties of the belts at different locations — as would be needed to fully distinguish between the two proposed acceleration mechanisms, says space scientist Harlan Spence of the University of New Hampshire in Durham, a co-author of the study.

That data gap drastically narrowed with the August 2012 launch of NASA’s Van Allen Probes, two identical satellites that simultaneously study the belts from different locations and viewing angles. In early October, a week after a solar storm had depleted the outermost belt of most of its electrons, the two probes recorded a nearly 1,000-fold jump in electron density in less than 12 hours. The twin set of observations clinches the case for electric fields within the belt accelerating the electrons, Spence says.

Heart of the matter

“We have in this one event been able to really distinguish between the different ways that particles can be accelerated,” says Spence. “The radiation belts were the first discovery of the space age,” he adds, “and it’s just really exciting with the Van Allen probes to have seen right to the heart of the process.”

The measurements “clearly show that substantial particle acceleration can occur locally in the heart of the radiation belts”, comments space physicist David McComas of the Southwest Research Institute in San Antonio, Texas, who was not involved in the study.

Spence suggests that the frequency of some of the electromagnetic waves in the belt matches the frequency at which electrons travel around the local magnetic field, a synchrony that makes it easy to rev up the charged particles.

Local acceleration of energetic particles is a general physical process, notes McComas, “so if it occurs in the heart of the Earth's Van Allen belts, it also probably does so in the more intense radiation belts around Jupiter and Saturn and even in planets around magnetized stars beyond the Solar System.” Stars that radiate a high concentration of X-rays and have magnetic fields shaped like that of Earth’s — which is essentially a large bar magnet — may be candidates for sporting a similar acceleration process, Spence adds.