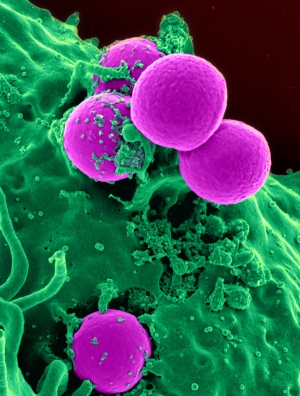 Genome sequencing has revealed how a strain of methicillin-resistant Staphylococcus aureus (MRSA) spread through parts of New York City. Although MRSA is often associated with public spaces such as hospital and gyms, researchers say that private homes helped to fuel its travels in the New York neighbourhoods of Manhattan and the Bronx.

The study, published in the Proceedings of the National Academy of Sciences1, suggests a framework for other investigations into how pathogens colonize and infect communities.

Anne-Catrin Uhlemann, a microbiologist at Columbia University Medical Center in New York, and her colleagues sequenced the genomes of 400 samples of MRSA collected from 161 people between 2009 and 2011, and compared them with samples from healthy people (many healthy people carry S. aureus bacteria, which could be MRSA). They also gathered data on study participants' medical histories, antibiotic use and home locations to identify a network of USA300 transmission.

“This is an elegant and productive use of whole-genome sequencing in an epidemiological investigation,” says microbiologist Alexander Tomasz of the Rockefeller University in New York.

Uhlemann and her team estimated the similarity between MRSA samples by checking how many different single-nucleotide polymorphisms (SNPs) — single-letter changes in their genomes — they had, and working out how fast these changes accumulated. The researchers calculated that the USA300 strains diverged from their most recent common ancestor around 1993. Although 85% of the samples were closely related to two known reference USA300 genomes, others were more diverse.

The team found that some of the samples originated in California and Texas, suggesting that USA300 was introduced into New York multiple times, rather than having one local ancestor.

Samples from people in a single household tended to be more similar to each other than to samples from other households, which implies that individuals within a home frequently exchange S. aureus. But people were also getting infected outside the home: “There were some households where we found multiple kinds of USA300, which is quite surprising,” says Uhlemann. “It suggests some kind of outside reservoir, such as a link to a hospital or a gym.”

It seems that the USA300 strain spread in public spaces first, but it is now prevalent in households as well as hospitals. Further studies are needed to evaluate how hospitals might be involved in spreading the bacteria back into the community, say the study authors.

Uhlemann and her colleagues also found that nearly two-thirds of their bacterial samples were either fully or partially resistant to fluoroquinolone antibiotics, which are often prescribed for routine bacterial infections. The drug gets excreted onto skin surfaces, which the authors suggest may have contributed to the resistance in USA300: the bacteria get exposed to low levels of the antibiotic and can evolve ways to survive it. “We have to limit our antibiotic use because the consequences may really be a lot of collateral damage,” says Uhlemann.