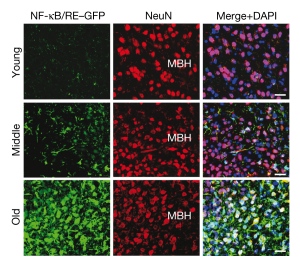 The area of the brain that controls growth, reproduction and metabolism also kick-starts ageing, according to a study published today in Nature1. The finding could lead to new treatments for age-related illnesses, helping people to live longer.

Dongsheng Cai, a physiologist at Albert Einstein College of Medicine in New York, and his colleagues tracked the activity of NF-κB — a molecule that controls DNA transcription and is involved in inflammation and the body's response to stress — in the brains of mice. They found that the molecule becomes more active in the brain area called the hypothalamus as a mouse grows older.

“We have provided scientific evidence for the concept that systemic ageing is influenced by a particular tissue in the body,” says Cai.

The researchers examined the health and mental abilities of the mice six months after the initial experiment. Animals injected with the NF-κB inhibitor performed better than controls on tasks designed to test their cognition and movement. They also showed less age-related decline in muscle strength, skin thickness, bone mass and tail-tendon integrity. The mice in which NF-κB was activated experienced more age-related decline. The results were similar in males and females.

Most previous studies have simply observed how long mice live after treatment, says Richard Miller, a pathologist at the University of Michigan in Ann Arbor. “Looking at different aspects of age-specific functions is a very good idea,” he says. “It makes a much stronger case that the whole ageing process has in some way been decelerated.”

Treating middle-aged mice to suppress the production of IKK-β, an enzyme that activates NF-κB, in microglia in the hypothalamus also reduced age-related cognitive and physical declines. Suppressing IKK-β in all areas of the brain increased median lifespan by 23% and maximum lifespan by 20%.

The researchers report that NF-κB counteracts the effects of a hormone called gonadotropin-releasing hormone (GnRH), reducing brain-cell growth and shutting down the mice's reproductive systems. Injecting mice with GnRH slowed down ageing and triggered the growth of new brain cells. That suggests that inflammation and stress are an evolutionary signal to the body to stop reproducing, which triggers the start of the ageing process.

The findings are “a major breakthrough in ageing research”, says David Sinclair, a molecular biologist at Harvard Medical School in Boston, Massachusetts.

He says that a key finding is that blocking the effects of NF-κB produced anti-ageing effects even when it was done in middle age. “If we’re going to translate this research into medicines that can help people, clearly we cannot start very early in life.”

The research “is certainly worth a lot of additional attention”, says Miller. He thinks that Cai's study will stimulate research into treatments for slowing down age-related illnesses that are linked to inflammation, such as arthritis, diabetes and Alzheimer’s disease.