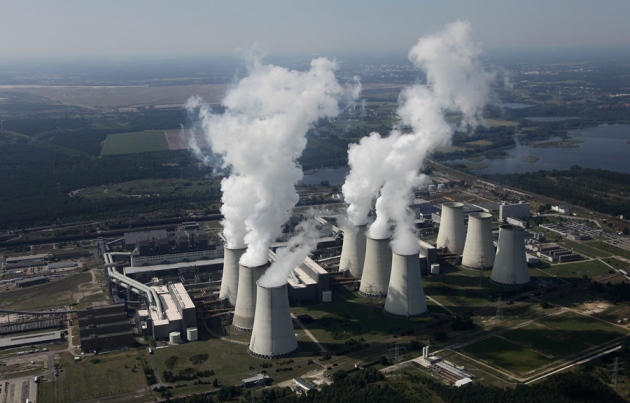 Meeting long-term climate goals will require substantial progress in technologies such as carbon capture and storage.

The European Union’s member states are to reduce their collective greenhouse-gas emissions by 40% by 2030, relative to 1990 levels. This target, announced today by the European Commission, is an attempt to get Europe on track to meet its goal of cutting emissions by at least 80% by 2050, but falls short of the more aggressive plans many scientists had hoped for.

The mid-term emissions-reduction objective is part of the 2030 framework for European Union (EU) climate and energy policies, which was unveiled in Brussels today after weeks of intense internal talks. The commission also proposes to increase the EU-wide share of renewable energies to 27% of total energy consumption by 2030. It currently stands at around 14%.

In addition, the framework contains a proposal to increase the annual reduction in the ‘cap’ on emissions from industry sectors participating in the EU emission-trading system, from the current 1.74% to 2.2% after 2020. It also proposes creating a market-stability reserve to tackle a mismatch between supply and demand that arose in the scheme. But the commission postponed a proposal on improved energy-efficiency targets until after the release of a review of the EU’s current directive on energy efficiency, due later this year.

“We have set ourselves ambitious and yet feasible and affordable targets,” said José Manuel Barroso, the president of the European Commission, at a press conference in Brussels. “This will strengthen Europe’s leading role in the global climate debate and help shape future international climate policies.”

The package must still be approved by the European Parliament and by EU member governments. Ideally, says Barroso, by spring of next year the EU should be in a position to make a formal commitment as to the level of its contribution to global greenhouse-gas-reduction efforts. The world’s nations hope to reach a new global climate agreement at a United Nations conference in Paris in late 2015.

The EU can hope to achieve a 40% reduction in emissions by 2030 with existing technologies and at relatively low economic cost, according to the results of a multi-model analysis released last month1. But scientists involved in the study warn that the costs of further de-carbonizing Europe’s economy may rise sharply thereafter — unless substantial progress is made in low-carbon energy technologies such as renewable energy and carbon capture and storage.

In 2008, the EU’s member states agreed on a plan to reduce their collective greenhouse-gas emissions to 20% below 1990 levels by 2020. Although some countries are lagging behind their national targets, the EU as a whole is on track to exceed that goal by almost 5%, says Connie Hedegaard, the EU’s commissioner for climate action.

Critics say that in view of that success — owed in part to the recent economic recession — Europe could easily afford to set itself more ambitious 2030 targets than those proposed by the commission.

“The modest 2030 targets are not in line with what the science tells us is needed to limit global warming to below 2 °C,” says Rebecca Harms, co-chair of the Green group in the European Parliament. “After a promising start, Europe’s climate ambitions are in fact sliding backwards again.”

From a scientific viewpoint, the EU’s 2030 target would need to be nearer to 80% than to 40%, agrees Kevin Anderson, an energy and climate scientist at the University of Manchester, UK, and deputy director of Manchester's Tyndall Centre.

Anderson has previously criticized the commission for misrepresenting probabilities — with “dramatic consequences for the necessary scale of mitigation” — of keeping atmospheric warming below 2 °C.

“Whilst political decisions are rightly the responsibility of politicians, it surely is incumbent on us as scientists to press hard for scientific consistency,” he says. “Scientific uncertainties notwithstanding, I am surprised that so few scientists have been prepared to voice their concerns about the sheer scale of the shortfall.”