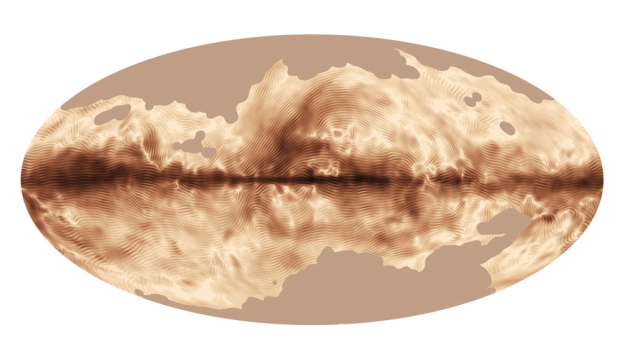 ESA and the Planck Collaboration

The map released by the European Space Agency's Planck mission has darker regions where microwave polarization is stronger. Striations indicate the direction of the galactic magnetic field. Whirls above and below the plane of the galaxy (black horizontal band) reveal clouds of galactic gas and dust.

The European Space Agency’s Planck spacecraft this week released a sky map of the intensity of polarized light in the Milky Way, but the findings are perhaps more notable for what they do not include.

Scientists had hoped that the map, based on data presented in four papers posted on the arXiv preprint server1–4, would help to determine the accuracy of the detection in March of evidence for primordial gravitational waves — ripples in space-time encoded in the radiation left over from the Big Bang. But the Planck map does not cover the full sky, and excludes, in particular, the south polar region where evidence for the gravitational waves was spotted.

“The plot thickens,” says cosmologist Michael Turner of the University of Chicago. “Planck is really turning this into a drama.”

If confirmed, the detection of gravitational waves, made by the BICEP2 instrument at the South Pole, would be a stunning achievement, corroborating the leading model for how the infant Universe evolved to become the vast tapestry of galaxies and galaxy clusters seen in the sky today. But such detections are based on a faint, swirl-like polarization pattern imprinted in light from the cosmic microwave background. Their accuracy hinges on the ability of scientists to correctly adjust for confounding polarization originating from sources, such as galactic dust, of polarized light from within the Galaxy.

In announcing results from their three-year study using BICEP2 (see 'Telescope captures view of gravitational waves'), radio astronomer John Kovac of the Harvard-Smithsonian Center for Astrophysics in Cambridge, Massachusetts, and his colleagues made several arguments showing that they had accounted for Milky Way dust in their detection. BICEP2 looked through a region, dubbed the Southern Hole, that contains relatively little dust. In addition, the properties of the polarization signal that the telescope detected did not match those predicted by six models of the way dust polarizes light — two of which, Kovac notes, incorporate preliminary information from Planck.

But no one has a very good model for dust polarization, says Marc Kamionkowski, a cosmologist at Johns Hopkins University in Baltimore, Maryland. Determining whether evidence for primordial gravitational waves is a true detection requires a full-sky map of the polarization from dust, recorded at several frequencies. At present, only Planck can produce such a map.

The map released this week, however, focuses on the plane of the Galaxy and excludes the Southern Hole and other regions of high galactic latitude, “because our signal-to-noise ratio there is low and we do not yet fully [understand] the uncertainties in those regions,” says Jan Tauber, a Planck project scientist in Noordwijk, the Netherlands. The excluded regions, which amount to about 21% of the sky, will be included in Planck data released in October, he adds. Those data may also include findings from the Planck team’s attempt to search for the signature from gravitational waves.

“The exclusion of our region in the latest Planck publications will make it difficult to draw any direct conclusions, but we will certainly be studying them carefully to see what new general information is offered,” says Kovac.

The good news for BICEP2, says Kamionkowski, is that the Planck map offers “no major surprises in terms of dust polarization”. Still, “any theoretical extrapolation from the galactic plane to the BICEP2 field does not add much to what has been assumed already,” he says, and “will be made obsolete” when Planck releases its full sky map.

There may be news before October, says John Carlstrom, an astronomer at the University of Chicago in Illinois, who heads the South Pole Telescope (SPT), just next door to BICEP2. The SPT has observed the same field as BICEP2 for more than a year, and is capable of detecting imprint of gravitational waves, he says. Carlstrom and his team will first do an analysis that compares SPT observations with those of BICEP2, and then do an independent analysis. Carlstrom says that he hopes to have results from the comparison this summer.

For now, the new map has enabled Planck researchers to map the global magnetic field of the Milky Way at high resolution. On large scales, the map “will help us understand why there is a field at all and how it is amplified and distorted by turbulent and streaming gas motions in the Milky Way”, says Planck astronomer Peter Martin of the University of Toronto in Canada. On smaller scales, the geometry and strength of the magnetic field could shed light on how magnetic interactions regulate star formation within molecular clouds, he adds.