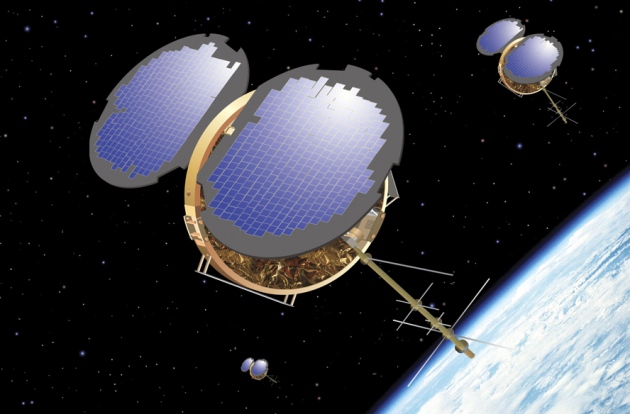 The COSMIC radio-sounding satellites are ageing but may set the stage for a commercial system.

Some orbiting satellites look up at the stars. Most point down towards Earth. But the satellites of the Constellation Observing System for Meteorology, Ionosphere and Climate (COSMIC) look sideways, across the curving horizon. There, dozens of satellites that are part of the Global Positioning System (GPS) pop in and out of view at the edge of the planet. By tracking their radio signals, COSMIC can provide atmospheric data that enhance weather forecasts and climate models.

But the fleet, launched six years ago at a cost of US$100 million, is nearing the end of its life, with one satellite of the original six already defunct. At a three-day workshop last month at the University Corporation for Atmospheric Research (UCAR) in Boulder, Colorado, researchers hailed the US–Taiwanese COSMIC as a pioneer and discussed plans for a commercial successor: a network of 24 micro­satellites dubbed the Community Initiative for Cellular Earth Remote Observation (CICERO). Researchers say that the programme could help to address a gap in atmospheric data as the United States struggles to meet a 2016 launch date for the first spacecraft in its expensive Joint Polar Satellite System (JPSS). The radio-sounding technique that both COSMIC and CICERO use is a “disruptive technology”, says Rick Anthes, a COSMIC scientist and former president of UCAR. “The impact is huge — especially the impact for the cost.”

GPS radio signals, picked up by Earth-bound receivers in everything from mobile phones to missiles, yield precise position information. But COSMIC puts them to a different use. The signals travel at a known rate, but skimming through the planet’s atmosphere and back out to space bends the signals and delays them; COSMIC uses the length of the delay to measure the atmospheric density, which can provide information on changing characteristics such as temperature and moisture levels (see ‘Bending for data’). It makes many hundreds of these radio-occultation measurements each day. 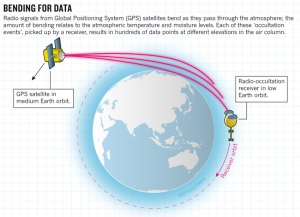 Radio occultation has been a tool for planetary science from the early days of the space programme. In 1965, NASA’s Mariner 4 craft broadcast radio signals to Earth across the edge of Mars, yielding estimates of the pressure of the red planet’s thin atmosphere. A decade later, the Voyager probes used the technique to sample the atmospheres of Jupiter, Saturn, Uranus and Neptune.

But for the technique to be useful on Earth — where basic atmospheric characteristics are already well known — a much denser network of transmitters and receivers is required. The GPS satellites offer a convenient set of transmitters, but for more than a decade the necessary receivers remained elusive. Anthes tried to gain US government support to launch COSMIC, but eventually gave up; he found a receptive audience in the then-nascent Taiwanese space programme. “It was a struggle but we did it,” he says.

Since 2006, the small mission has demonstrated its many advantages. Satellites that rely on infrared sounders cannot see through clouds; microwave sounders can be confounded by intense moisture; but the radio waves seen by COSMIC pass unimpeded through even the worst storms. Furthermore, radio-occultation measurements depend only on the arrival of a signal, which can be timed using atomic clocks and easily compared between satellite systems and observing campaigns. That has made radio occultation an important calibration tool for climate scientists.

Gottfried Kirchengast, who works on radio occultation at the University of Graz in Austria, combined a decade’s worth of data from COSMIC and other sources and found that atmospheric temperature was rising — evidence of anthropogenic climate change (B. C. Lackner et al. J. Climate. 24, 5275–5291; 2011). “Radio occultation allowed the detection of a trend in the shortest time period ever,” he says.

Now that COSMIC has lost one satellite, says Bill Kuo, director of the programme, “We’re living on borrowed life, so to speak.” But radio-occultation data will continue to flow from the European Meteorological Operational satellite programme (MetOp), which launched a second satellite in September and is now providing about 1,400 soundings per day (see ‘A global view’). For their part, COSMIC team members hope for a successor mission, COSMIC-2, which in 2016 would launch six satellites to orbit a narrow section of the tropics, gathering data that would reduce uncertainty in measurements of hurricane intensities by 25%, and in those of hurricane tracks by 25–50%. 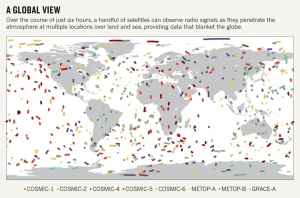 But CICERO has advantages over both of these programmes. Tom Yunck, the founder of GeoOptics in Pasadena, California, which is developing the network, says that CICERO’s fleet would observe many more occultations than COSMIC, because each member would track not only the 32 GPS satellites, but also the 24 spacecraft in the Russian Global Navigation Satellite System and the 30 satellites that will comprise Europe’s Galileo system by the end of the decade. In total, Yunck expects CICERO to generate an unprecedented 30,000 soundings per day or more.

“If you look at the impact per observation, radio occultation scores quite highly,” says Sean Healy, a scientist in the satellite division of the European Centre for Medium-Range Weather Forecasts in Reading, UK. “There are clear arguments for trying to increase the number of radio-occultation data available.”

Yunck also hopes to transform the economics of weather data. Whereas most weather data are acquired with satellites paid for and launched by publicly funded agencies such as the US National Oceanic and Atmospheric Administration (NOAA), Yunck would build and launch CICERO with private funds, and then license the data to agencies in the United States and, potentially, elsewhere. Researchers would have free access to the data through the government, just as they do now. Yunck says that GeoOptics has raised $4 million of the $14 million that it needs to launch a two-satellite pilot project in mid-2014. That could expand to 24 satellites within 18 months; Yunck estimates that the total cost of building and launching the constellation would be about $150 million.

He hopes to prove the concept by launching CICERO before NOAA’s JPSS, a $12.9-billion programme of five weather satellites equipped with microwave and infrared sensors. The JPSS has exceeded its planned budget, and in July 2012, an independent review labelled its oversight “dysfunctional” and said that the JPSS’s delays and exorbitant costs — which the reviewers could not understand — were affecting NOAA’s credibility.

Each JPSS satellite will weigh about 2,500 kilograms. By contrast, a CICERO satellite — little more than a high-fidelity receiver — would weigh just 85 kilograms and could piggyback as a secondary payload on another launch. Yunck acknowledges that the JPSS will do things CICERO never could, such as imaging and ozone mapping. But he says that CICERO would measure temperature more precisely, and certainly more cheaply. JPSS costs “have gone through the roof, and they’re getting nowhere”, says Yunck.

In a statement, NOAA spokesman John Leslie said that, in spite of its challenges, the JPSS programme has “delivered impressive outcomes”, including the 2011 launch of a pilot craft, the Suomi National Polar-orbiting Partnership satellite. He adds that the agency “strongly supports” collecting data that will continue COSMIC’s efforts; NOAA is open to buying the data commercially, but is not convinced that commercial sources of data will become available in the short term.

Yunck would like to change that impression. If the CICERO model succeeds, it might usher in a slew of other commercial satellite networks that could provide a range of data, including greenhouse-gas observations and gravity measurements, says Conrad Lautenbacher, chief executive of GeoOptics and a former head of NOAA. He adds, “I would like to put the government out of the business of doing routine measurements and observations that could easily be done by a commercial company.”