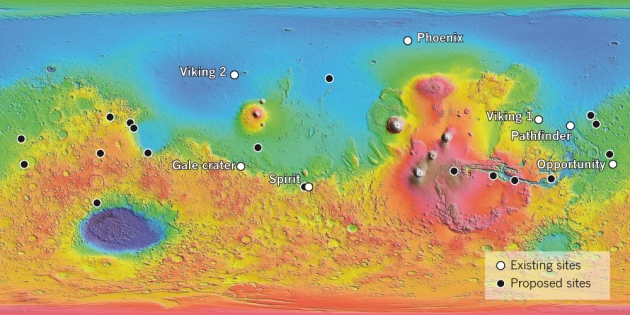 Past and current Mars rovers have landed at only a fraction the sites that NASA wants to investigate.

It took years of fierce debate to winnow the dozens of potential landing sites for NASA's Mars Curiosity rover down to just one. But although the US$2.5-billion machine won’t land in Gale Crater until August, Mars scientists are already thinking about where they want to go to next. On Wednesday, at a workshop held in Herndon, Virginia, 40 of them developed a list of ten high-priority sites that must be characterized in preparation for future missions.

Some would consider it premature to plan for a future rover, given that Curiosity could be the last in a long time. Just two weeks ago, NASA announced that it would be withdrawing from missions that it had been set to pursue with the European Space Agency (ESA) in 2016 and 2018. ESA says that it is working with Russia to fill the gaps left by the US withdrawal, but nothing has been decided.

Nevertheless, workshop organizers say that data must be gathered on the new sites as soon as possible. The urgency stems from worries about the longevity of the satellite that has done the bulk of the work so far: the Mars Reconnaissance Orbiter (MRO), which was launched in 2005. One of the 14 charge coupled device (CCD) detectors on its high-resolution camera no longer works, and one of the three cryogenic coolers used for its imaging spectrometer is now out of commission. There is nothing remotely similar planned to replace it.

Richard Zurek, project scientist for the MRO at NASA's Jet Propulsion Laboratory in Pasadena, California, says that researchers must wring as much science as possible from the orbiter while it is still functioning. “We’ve only seen a very small fraction of Mars with high resolution,” he says. “Maybe the best site is still out there.”

What would define the best site? Until NASA withdrew from the ESA projects, it was thought that the 2018 mission would be a rover that would cache rocks that later missions could return to Earth for analysis. In December 2011, a framework for prioritizing the science of such a sample-return mission was established, says Scott McLennan, a geochemist at Stony Brook University, New York, who co-chaired the international committee (see 'Seven target sites announced for Mars sample return').

The top priority would be gathering samples from a once-watery environment that might preserve evidence of ancient life. The second most important goal is to find igneous rocks that could be dated by radioisotope analysis to get a better idea of the ages of rocks on Mars. A report from McLennan's group offered up a list of seven possible sites, including Gusev Crater, where NASA's Spirit rover landed in 2004, and Mawrth Vallis, one of four sites that reached the shortlist for Curiosity.

The workshop on Wednesday was supposed to add to that list, and some of the proposed sites fell into familiar categories. Jack Mustard, a Mars scientist at Brown University in Providence, Rhode Island, says that tensions that played out in the debate over Curiosity's landing site are surfacing once more. “The debate hasn’t moved,” he says. “The positions have been established.”

Some Mars scientists prefer sites that contain remnants of ancient lakes and river deltas, which could have concentrated and preserved signs of life. But these sites tend to lie in relatively young terrains, dating from a time when Mars was becoming drier and less hospitable. Another set of researchers tends to favour water-altered minerals from older sites, which may represent exposures of subterranean hydrothermal systems — another possible niche for life.

John Grant, a Mars scientist at the Smithsonian Institution in Washington DC, and co-chairman of the landing site selection process, says that the MRO should gather fresh data for the high-priority sites within the next few months, and that a next workshop will be planned for a year from now.