While US basketball fans nationwide have been cheering on Badgers and Wildcats in the NCAA college-level tournament this month, scientists and animal enthusiasts have been riveted by pandas, bison and other furry combatants in Mammal March Madness. The Twitter-based competition, organized by four biologists, features hypothetical battles that are based on the real-life strengths and vulnerabilities of the contestants. The tundra wolf defeated the forest hog in the final showdown on 24 March. After debuting in 2013, the month-long tournament has attracted a passionate base of fans who try to predict the results of each round (or 'bracket') and root for their favourite animals, while discussing online the biology of the mammals. Laura Huenneke, an ecologist at Northern Arizona University in Flagstaff, summed up the drama on Twitter:

Katie Hinde, an anthropologist at Arizona State University in Tempe, started Mammal March Madness after coming across a 16-animal tournament online that was based solely on cuteness. She thought that she could do better. She organizes the annual event with conservation biologist Joshua Drew at Columbia University in New York, evolutionary biologist Christopher Anderson at Dominican University in River Forest, Illinois, and biological anthropologist Kristi Lewton at the University of Southern California in Los Angeles. They fill out the initial roster of 64 mammals with an eye towards diversity and compelling competition, and delve into the scientific literature on the animals. Considering traits such as size, aggression and natural weaponry, the team assigns a probability of each mammal winning a particular simulated match, although those decisions aren’t always unanimous. “We have a lot of heated discussions,” Lewton says. The organizers launched the contest earlier this month. 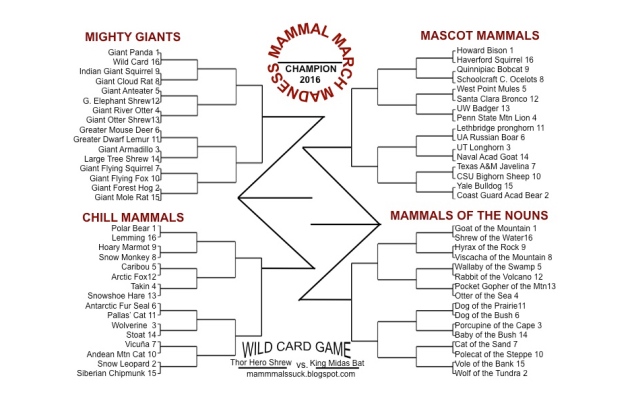 To determine which animal survives and advances to the next match, the group uses a random number generator, weighted with the probabilities, to introduce an element of chance. As with the NCAA tournament, some of the early contests are decidedly one-sided: the lemming never had much hope against the polar bear. As the clashes become more competitive, chance can deal out cruel fates. “I’m a primatologist, so I have a deep bias toward monkeys,” says Hinde. “They don’t do well. They get wiped across the floor.”

Before the winners are announced, the team creates plausible battle narratives that play out on Twitter in front of an audience of thousands, including students — a sign, say the organizers, of how the competition has also become a tool for science education. “A lot of people chime in,” Lewton says. “They aren’t just spectators. It’s inclusive and participatory.”

Hinde announced a match between two of the eight finalists:

First Up This Evening... In the MIghty Giants Division: Panda vs. Forest Hog #2016MMM

Throughout the competition, researchers, educators and other Twitter followers have learned about the bite force of wolverines, the history of domestication of longhorn cattle and the toilet habits of the panda — information tweeted by the organizers and observers.

Wait, one second, yep, Panda just defecated like he does 40+ times a day bc of the limited ability to digest his bamboo diet #2016MMM #160kg

“I’m an ecologist and a conservation biologist, and I learn something new in every bracket,” Huenneke says.

A battle on 21 March featured the final eight, including a duel in the cold-adapted division between the wolverine and the polar bear. Many spectators were shocked by the demise of the polar bear, a tournament favourite that was hobbled by injuries from its previous run-in with a Himalayan takin (a horned, stocky animal related to sheep and goats). After tracking the bear for days, the wolverine made its move, as Drew described on Twitter:

Eventually the white snow fades to blackness, as the vice like jaws close down the throat of the Polar Bear #2016MMM

On 22 March, the tundra wolf defeated the bison and the forest hog took down the wolverine, setting up an epic showdown on 24 March.

The article has been updated to include the winner of the tournament.