While waiting for his paper to be published, Daniel Himmelstein, a PhD student in biological and medical informatics at the University of California, San Francisco, compiled the median time between acceptance and publication for 3,476 journals. He found that the wait ranged from 3 to more than 100 days.

Long delays are common, he noted on his blog. Among 16 journals in his field, PLoS Computational Biology was the worst with a median wait time of 57 days. PLoS Genetics was not far behind. (Nature’s median wait was almost 48 days.)

The blog post caused a stir on social media. Claus Wilke, an integrative biologist at the University of Texas at Austin, tweeted: 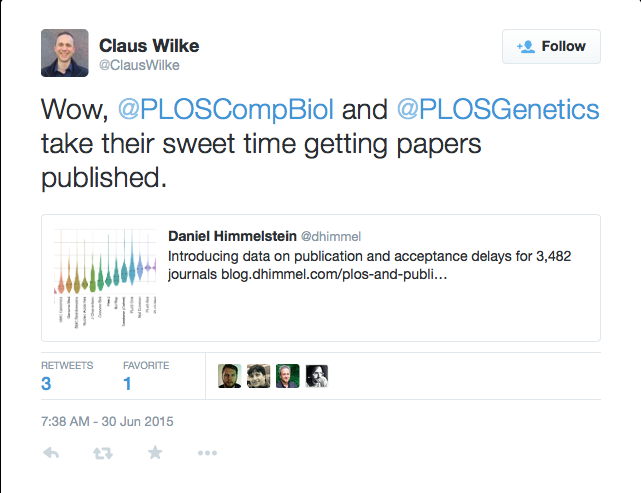 David Knutson, a spokesperson at the journals’ publisher the Public Library of Science (PLOS), says that producing high-quality papers takes time, but the publisher has a “laser focus” on reducing delays.

Knutson says that PLOS has been overhauling parts of its production system in recent months, including working with a new contractor to handle typesetting. Wait time should be significantly reduced by the end of the year. “Speed to publication is one of the biggest priorities of our authors,” he says.

Other journals also take their time. According to Himmelstein’s searchable database, the median wait for the Journal of Clinical Neuroscience is 99 days, and for the Journal of Forensic Sciences it’s 289 days. By contrast, eLife, a journal that offers the option of rapid publication of accepted manuscripts, had a median wait time of just three days.

Often, there is a broad spread of wait times within each journal, Himmelstein found. Waits of at least 100 days were especially common for PLoS Computational Biology and PLoS Genetics (see figure). This is of particular interest to Himmelstein, because he has now been waiting two months for his accepted paper to appear in PLoS Computational Biology. 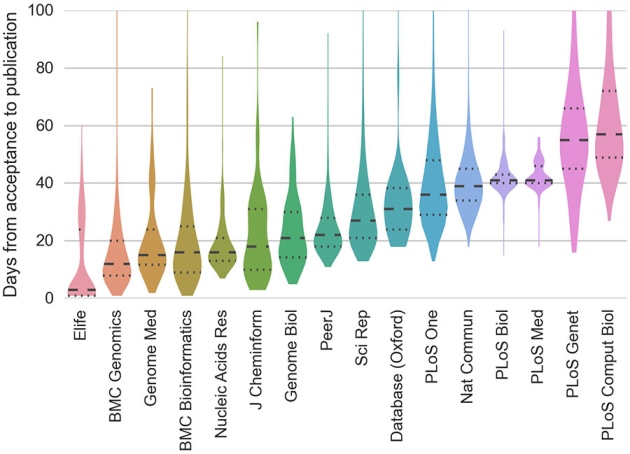 “I’m a big fan of PLOS,” Himmelstein told Nature. “But if something doesn’t seem to be working efficiently, it’s important to point that out."

He added, "There’s no scientific advance that’s happening when your paper is just sitting in a queue."

In his blog post, Himmelstein wrote that it would be handy to have a website that rates the service of journals in much the same way that the site Yelp ranks restaurants. Just as a slow pizza restaurant might get a bad review, long wait times could hurt a journal’s overall rating. 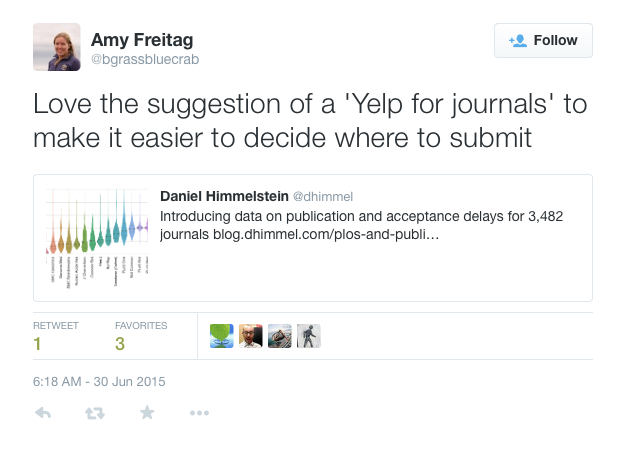 Some sites already try to serve this function, including SciRev, JournalReviewer and Journalysis — but they are sometimes incomplete. Journalysis currently lists the publisher of PLoS Genetics as “unknown.”

Daniel MacArthur, a geneticist at the Broad Institute of MIT and Harvard in Cambridge tweeted:

He told Nature he hasn’t had a chance to independently assess Himmelstein’s numbers or methodology, but the problem of long wait times is well known. “Publishers need to do better than the current glacial pace of distribution or they’ll be increasingly irrelevant to scientific discussion,” he says.

This article has been corrected to include the full tweet by Daniel MacArthur.