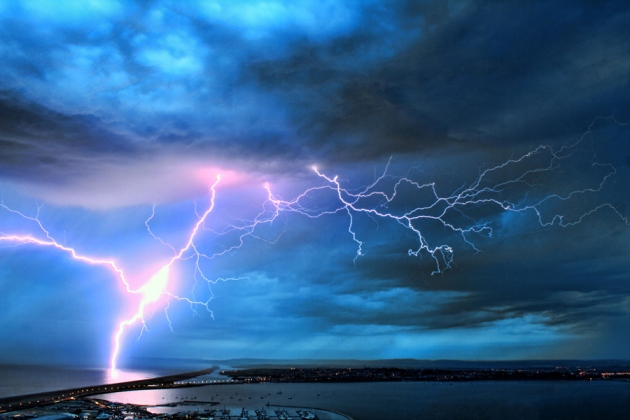 Lightning is more frequent when solar wind is particularly intense, pointing to a possible role of high-energy solar particles in triggering the bolts.

Lightning has been around since the dawn of time, but what triggers it is still an enigma. Now, researchers propose that the answer could lie in solar particles that penetrate the atmosphere and ionize the air, releasing free electrons and leading to a massive discharge.

Thunderclouds become electrically charged from the collisions of microscopic ice particles in their midst, and from air currents that push the negative and positive charges apart. The air is a good insulator, keeping electrons from jumping back and equilibrating the electrostatic charges. But if a pathway of ionized air molecules forms that can act as a conductor between different parts of a cloud, or between the cloud and the ground, the result is a lightning bolt.

However scientists are still not sure of what initiates the formation of such a pathway. In the presence of strong enough electric fields, insulators spontaneously break down and become conductors, but experts believe that the atmosphere simply cannot reach the hundreds of thousands of volts or more required to produce a lightning. So they have been searching for alternative explanations. Researchers at the University of Reading, UK, now say that solar wind has a role.

As high-speed solar-wind particles travel through space, they can lead to localized strengthening of the magnetic field, which pushes some of the particles to even higher speeds. These so-called solar energetic particles (SEPs) — unlike other those that travel at slower speeds — have enough energy to penetrate Earth’s magnetic field and to travel through the atmosphere, down to the altitudes where thunderclouds form. There, researchers say, they could collide with atoms in the air, generating a cascade of high-energy particles. This ‘runaway breakdown’ would be sufficient to trigger lightning, says Christopher Scott, a space scientist who led the latest study. He and his team present the results this week in Environmental Research Letters1.

The idea of runaway breakdown was first proposed in 1992 by Alexander Gurevich, a physicist at the Lebedev Physical Institute in Moscow2. But his theory was that lightning was seeded by cosmic rays, which originate outside the Solar System and can be much more energetic than solar-wind particles, including SEPs.

To check for correlations between lightning and solar particles, Scott and his colleagues analysed the records of lightning strikes within a 500 kilometre-radius of central England. They compared the frequency of bolts to data from NASA’s Advanced Composition Explorer spacecraft, which measures solar-wind streams reaching Earth.

The scientists found that, on average, 422 lightning bolts per day occurred in the 40 days after the arrival of high-speed solar-wind streams at Earth. In the 40 days before its arrival, there was an average of 321 lightning strikes per day.

Scott says that balloon experiments could provide more support for his model. In particular, balloon-borne particle detectors could test whether the number of high-energy particles that cross the atmosphere is higher during periods of intense solar wind.

“This is the first study that I am aware of that found a link between the solar-wind streams at Earth and lightning,” says Joseph Dwyer, a physicist at the Florida Institute of Technology in Melbourne, who was not involved in the study. If the model turns out to be correct, he adds, the work done by Scott and his team would be “extremely important”.