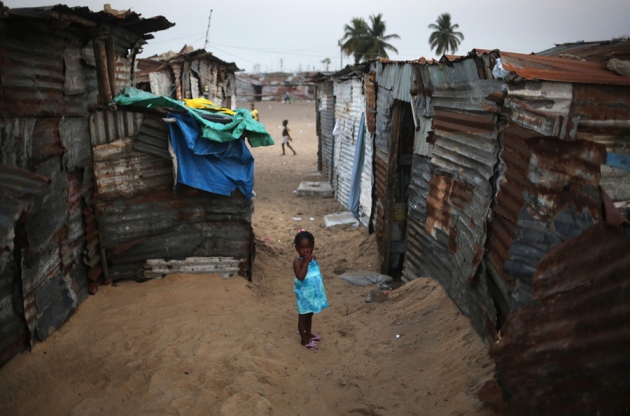 A girl in the West Point township in Monrovia, Liberia, where life has begun to return to normal.

Liberia is the first of the three main countries affected by Ebola to be free of the disease, the World Health Organization (WHO) said today (9 May), marking the end of the 15-month-long epidemic in the country. But the epidemic continues in nearby Sierra Leone and Guinea, and the WHO is warning against complacency, highlighting the risk of further flare ups and geographical spread.

"Today’s announcement is a testament to all of the extraordinary Liberians and our global partners who worked tirelessly over the past 15 months to fight Ebola," says Rajesh Panjabi, who is the chief executive of Last Mile Health, a non-profit organization that operates in Monrovia and Boston, Massachusetts, and an associate physician at Harvard Medical School. "This is a great achievement, but there is still much work to be done to strengthen Liberia’s health system so that an epidemic like this will never happen again."

The last person in Liberia known to be infected with the disease died on 27 March and was buried the following day. That means that as of today, 42 days have elapsed since the burial — the delay that the WHO uses to declare a country Ebola-free and twice the maximum incubation period for the disease.

Data suggest that an end to the epidemic across West Africa is also in sight. In the week up to 3 May, Guinea and Sierra Leone each reported just nine new cases — a far cry from the later months of last year, when the epidemic was peaking and hundreds of cases were being reported every week.

Ebola is also more geographically contained now. Back then it was a widespread disease that raged like a forest fire. Now it consists a few burning embers confined to the Forécariah prefecture in western Guinea, the neighbouring district of Kambia in Sierra Leone, and a region around Sierra Leone's capital, Freetown. This is the lowest number of affected districts since May 2014, which is allowing outbreak response teams to focus their attack on a far smaller area.

But there are reasons for caution. Forécariah itself is a large district, and borders between countries in the region are porous, meaning that there is always a risk that an infected person might travel and spark new outbreaks elsewhere. With the rainy season underway, outbreaks in more remote regions could prove difficult to control as dirt tracks — often the only means of access — are transformed into muddy swamps.

A nagging concern is that most of the newly reported cases, in particular in Guinea, are individuals who are not among the listed contacts of people known to be infected, suggesting that chains of transmission continue to go undetected (see 'Six challenges to stamping out Ebola'). Unsafe burials in which people which people can come into contact with the corpse and contaminated materials, such as clothes and bedding, also continue to take place and can be a major cause of disease spread, especially if mourners come from far and wide. "Taken together, these indicators suggest that tracking transmission chains is still challenging, and there remains a possibility of an increase in case incidence and/or geographical spread in coming weeks," warned the WHO last week.

If Guinea and Sierre Leone overcome these challenges and soon follow Liberia in being declared Ebola-free, soul-searching will accompany relief. Médecins Sans Frontières'‎ efforts on the frontline have been widely acclaimed but otherwise, the world's system for responding to epidemics failed spectacularly.

There is an urgent need to learn from the mistakes and weaknesses that Ebola exposed. Bruce Aylward, who leads the WHO's Ebola response, recently remarked: "Ebola was not an exception. Ebola is a precedent." Panjabi, for example, highlights the need to remove "blindspots" in rural healthcare. If professionally trained and supported healthcare workers had been stationed in remote villages throughout Guinea, Liberia and Sierra Leone, he says, when the first patients grew sick, they could have sounded the alarm before a small outbreak became a global crisis. "We may have stopped the hotspots," he says, "but the blind spots – remote villages with little or no access to healthcare – still exist."