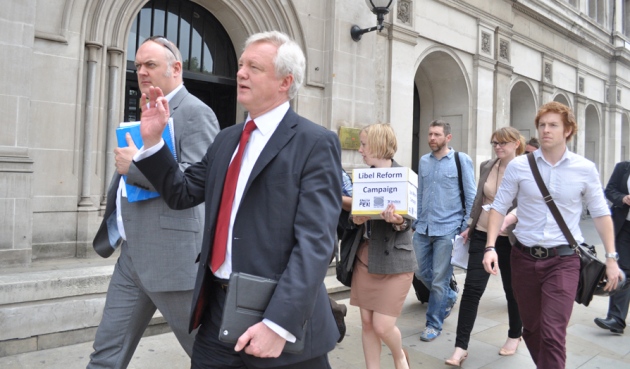 Last week, Nature claimed victory in a long-running libel trial that resulted in a judgment affirming the value of journalism that investigates practices in peer review and scientific publishing. But campaigners pushing for a reform of England’s libel laws have warned that the ruling could make journalists and public-interest groups less willing to expose themselves to libel claims because it shows that only those with deep pockets can afford to defend such cases.

With the UK Parliament preparing to debate reforms to libel laws later this year, campaigners have argued that Mohamed El Naschie’s libel case against Nature highlights that the proposed reforms are unlikely to be enough to safeguard free speech and scientific debate.

El Naschie, a theoretical physicist and former editor-in-chief of the journal Chaos, Solitons and Fractals (CSF), sued Nature’s publisher, Nature Publishing Group (NPG), and its news reporter Quirin Schiermeier over the 2008 article ‘Self-publishing editor set to retire’ (see Nature 456, 432; 2008). The story reported that El Naschie was the author of a large number of papers in his journal, and that some physicists questioned whether the work had been properly peer reviewed. It also noted that certain scientists considered some of El Naschie’s papers to be of poor quality.

Nature did not deny that the article was defamatory, but claimed three defences: that the piece was true (the ‘justification’ defence), that it was an ‘honest comment’ on the matter, and that its publication was ‘responsible journalism’ in the public interest — the Reynolds defence.

Successfully proving any of these three would have been enough to win the case. At Bristol Crown Court, UK, on 6 July, Mrs Justice Sharp dismissed the case, ruling in favour of NPG and Schiermeier on all three defences.

“It’s not really a ‘win’ if it took three years and enough money to bankrupt a normal person.”

El Naschie published 290 of his own articles in CSFbetween 1993 and 2008. Justice Sharp’s judgment stated that his level of self-publication was “excessive and unwarranted and amounted to an abuse of his position as Editor-in-Chief”.

An expert witness for NPG testified that the 58 papers El Naschie published in CSF during 2008 had defects that would have been picked up by proper peer review. “Any referee within the field, of normal competence, would most likely have rejected these articles for publication,” said Neil Turok, director of the Perimeter Institute for Theoretical Physics in Ontario, Canada.

Justice Sharp wrote that El Naschie “failed to provide any documentary evidence whatever that his papers were the subject of peer review”. She also concluded that the issues probed in the story — “the overall integrity of the peer review process” and “the particular responsibility of editors of peer review journals” — made its publication a matter of public interest.

El Naschie has until the end of August to decide whether to appeal. NPG was awarded costs. According to the company, the defence cost roughly £1.5 million (US$2.3 million).

Scientists and science writers have been heavily involved in an ongoing campaign to reform the libel laws of England and Wales. The Libel Reform Campaign in London — which is supported by NPG — maintains that it is too easy to bring hugely expensive and time-consuming libel cases in English courts, and that this has a “chilling effect” on speech about controversial topics. Even well-resourced publications are not immune: a Nature spokeswoman says that legal risks mean that the journal decides not to cover stories “several times a year”.

Of the cases that have motivated the libel reforms, perhaps the highest-profile example was the lawsuit filed by the British Chiropractic Association against science writer Simon Singh. Like the NPG case, this involved a piece of scientific journalism rather than a peer-reviewed paper.

All three major UK political parties have come out in favour of reform. But even though the draft law being considered by Parliament does include some specific protections for peer-reviewed articles and reports of scientific conferences, campaigners have warned that it would do little to stop cases such as Nature’s and Singh’s. They argue that it should be amended with a more explicit public-interest defence that would protect statements made on a matter of public interest unless the publication was motivated by malice. Such a provision would lower the risk that a weak claim would result in costly litigation, says Síle Lane, campaigns manager at Sense About Science in London, one of the groups backing libel reform.

“It’s not really a ‘win’ [for Nature] if it took three years and enough money to bankrupt a normal person,” she adds.