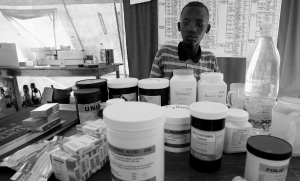 A young boy at a clinic in Kacheliba, Kenya, stares out over an array of leishmaniasis medication — the most common of which is associated with a high rate of relapse.

One in five people treated for a serious form of leishmaniasis in Nepal relapse after a year. The finding, published in Clinical Infectious Diseases last month1, is “an alarming signal” for campaigns to eliminate the neglected disease, say researchers.

Leishmaniasis, which is caused by the parasitic microorganism Leishmania donovani and spread by female sandflies (Phlebotomus argentipes), is endemic in 88 countries, of which 72 are developing, according to the World Health Organization (WHO).

The disease causes skin ulcers, swelling of spleen and liver, and erosion of the mucous linings of the nose, mouth and throat, and can be fatal if left untreated. Nine out of ten cases of the most severe form, visceral leishmaniasis, also known as kala-azar, arise in Bangladesh, Brazil, India, Nepal or Sudan.

The orally administered drug miltefosine emerged as the treatment of choice a decade ago, taking over from injections of the highly toxic, antimony-based drug sodium stibogluconate, which had started showing failure rates of 65% in India’s northern state of Bihar2.

But reports are now emerging of miltefosine failure, which scientists worry will narrow down the pipeline of drugs available for treatment.

In the latest study, a team of researchers from Belgium, Nepal and the Netherlands identified 187 cases of visceral leishmaniasis in Nepal, of whom 120 were treated with miltefosine. Six months after treatment with miltefosine, 10% of cases had relapsed; after a year, that had doubled to 20%1.

All patients responded well to treatment at first, but cure rates dropped from 82.5% six months after treatment to 73.3% after 12 months. Relapse was most common in children under 12 years old.

The cause of the relapses is unknown: they were not attributable to fresh infections; to co-infection with HIV, which reduces the host’s immunity; to low drug quality; to poor adherence to the treatment regime; or to drug resistance in the parasite.

Jean-Claude Dujardin, a molecular parasitologist at the Institute of Tropical Medicine in Antwerp, Belgium, and a co-author of the study, says, “Treatment with miltefosine is one of the pillars of the current control campaign and the decreased efficacy observed in Nepal, but also (to a lower extent) in India and Bangladesh must seriously be taken into account.”

“We should start monitoring these results at least in some sentinel surveillance areas in a routine way,” says co-author Suman Rijal, an internal-medicine researcher at the B. P. Koirala Institute of Health Sciences in Dharan, Nepal.

The latest findings add to results from Shyam Sundar, head of the department of medicine at Banaras Hindu University in Varanasi, India, who last year reported3 a failure rate of 7% six months after treatment with miltefosine in India.

Manica Balasegaram of the international charity Médecins Sans Frontières (also known as Doctors Without Borders) in Geneva cautions that the 20% failure rate “is unacceptable for a fatal illness such as kala-azar”. Whatever the causes of the failure, “these new results support the recommendation to discontinue miltefosine monotherapy”, he says.

Other treatment options, says Rijal, include the antifungal agent amphotericin; patients must be hospitalized for a month to be given up to 15 infusions of the drug. The WHO recommends short-course treatments of miltefosine combined with either amphotericin or the antibiotic paromomycin.

In fact, in 2010, the WHO's expert committee on leishmaniasis "strongly recommended not to use miltefosine monotherapy", says tropical medicine specialist Jorge Alvar, who directed WHO's leishmaniasis control progarmme and now heads the visceral leishmaniasis programme at the non-profit organisation Drugs for Neglected Diseases Initiative. Alvar adds that the committee prioritised starting with liposomal amphitericin followed by combination therapy.

But Dujardin says that the combination therapy could be problematic. The latest study raises the question of whether to continue a combination that includes a drug that is beginning to fail, or to phase out the drug without first finding out why it is failing.