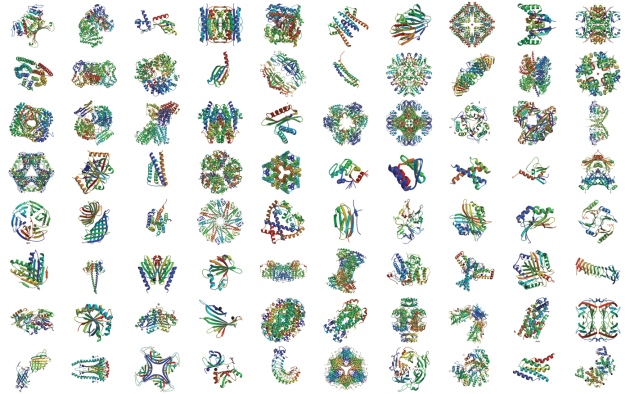 A sample of the thousands of protein structures solved with the help of a US National Institutes of Health programme that has now been closed down.

Big science is under big pressure at the US National Institutes of Health (NIH). Gone are the glory days of the early 2000s, when a doubling of the agency’s budget over five years allowed it to establish dozens of programmes with their own large, dedicated budgets. Since March, the mandatory US government cuts known as sequestration have sliced 5% off the NIH’s already-tight budget. Now, institute directors are assessing the future of these costly legacy programmes — and shutting some of them down. Given the climate, directors are wondering whether their limited money might be better spent funding competitive grant applications, more than 80% of which are currently denied.

“In challenging fiscal times, it’s incumbent on us to take a step back and look at how we’re investing money,” says Jon Lorsch, who took over the National Institute of General Medical Sciences (NIGMS) in Bethesda, Maryland, in August. He says that the budget crunch has contributed to his decisions on what to cut, and that his institute’s priority should be to fund research proposed by investigators, rather than programmes designed by the NIH.

Changes are already under way. In September, the NIGMS announced that it will wind down the Protein Structure Initiative (PSI), which since 2000 has received about US$70 million per year in dedicated funds to develop ways to crystallize proteins and predict their structures. And on 1 November, the institute announced that its Pharmaco­genomics Research Network, which studies how genes influence the effectiveness of drugs, will lose the protected budget that has brought it $404 million over its 13-year lifetime.

An advisory council to the NIGMS had concluded that the PSI was successful but had run its course. And the field of pharmaco­genomics, which was new when the research network began in 2000, has matured enough for its scientists to compete effectively with grant applicants in other fields, says Lorsch. “Now it’s time to let those things fly and be free.”

For investigators who feel that the NIH should hand out more small grants, the NIGMS’s example is welcome. The PSI, in particular, has been controversial. In its first phase, the money was distributed between nine structural-biology research consortia, each of which would go on to produce dozens of protein structures per year — with the lofty goal of eventually predicting structures for most of the amino-acid sequences possible in nature.

Steven Almo, a crystallographer at the Albert Einstein College of Medicine in New York who leads one of these consortia, says that the programme sped up the development of technologies such as robotic crystallization systems and automated high-throughput structure screening. He adds that all structural biology benefits from these advances, as well as from the thousands of solved protein structures that have been deposited in the PSI’s Structural Biology Knowledgebase (Nature Publishing Group partners with the NIGMS to maintain this database).

But many of the structures produced by the PSI, which were based on theoretical models, turned out to be irrelevant to biological functions, counters Gregory Petsko, a crystallographer at Brandeis University in Waltham, Massachusetts. If the PSI’s budget had instead funded a few hundred individual investigators, each competing to work on specific structures, they probably would have come up with more relevant proteins, he says. He is thrilled that the programme is shutting down. “Put a stake through its heart, bury it in a coffin filled with its native soil — do whatever you can do to keep it from rising again,” he says.

Partly in response to such criticisms, the PSI changed its direction in 2010, starting a new phase: PSI:Biology, which directed four centres to work on structures that biologists believe to be particularly important. Almo’s group, for instance, is now investigating proteins involved in the immune system, to look for molecules that could be useful as drugs or drug targets. He is disappointed that the PSI is shutting down just as the new phase is becoming productive. “We have a unique resource and we’re in the position to start applying this in a powerful way,” he says.

But Stefano Bertuzzi, executive director of the American Society for Cell Biology in Bethesda, says that the NIGMS has made the right decision. He thinks that it is better to make strategic cuts that eliminate entire programmes than to trim all projects and debilitate everyone.

“Put a stake through its heart, bury it in a coffin filled with its native soil.”

That approach also suits Story Landis, director of the National Institute of Neurological Disorders and Stroke (NINDS) in Bethesda, which has already instigated such changes. In 2009, NINDS could guarantee funding for only the top 9% of grant applications it received. So, Landis says, the institute began taking a close look at big, long-running legacy projects that had begun around 2000, and ended about 15 that were unproductive or outdated. This has saved the institute some $30 million in the past four years. Ending ineffective clinical trials saved another $92 million. NINDS now guarantees funding for 14% of grant applications.

“The issue wasn’t big science, it’s more making sure that we manage our dollars effectively,” says Landis. Indeed, NINDS will not be abandoning big projects any time soon: the controversial BRAIN Initiative, which aims to develop technologies to map neural circuits, could draw $40 million in NIH money in 2014 — much of it from NINDS.

Still, a tight budget does seem to be enforcing higher standards among big projects being started across the NIH (see D. Sarewitz Nature 502, 595; 2013). That is as it should be, says former NIGMS director Jeremy Berg, now director of the Institute of Personalized Medicine at the University of Pittsburgh in Pennsylvania. Berg does not believe that more money necessarily produces better science: in 2010, he performed an analysis which found that middle-sized labs with moderate funding are the most productive (see Nature 468, 356–357; 2010).

Yet Berg does not want big science to disappear. There will always be problems that can be solved only by large initiatives, he says — such projects just have to have clear and relevant goals. “My strong feeling is that the NIH’s goal is to try to facilitate the NIH mission, which is improving the nation’s health,” he says. “It’s not a jobs programme for scientists.”

Lorsch says that more changes can be expected at the NIGMS in the coming year, but he stresses that it will not be a battle between big science and little labs. “People set up a dichotomy of investigator-initiated projects versus team science, but that’s not the contrast we’re making,” he says. And there could be room for growth in a medium-sized category. Lorsch says that the NIGMS is looking at new funding mechanisms, such as grants with multiple principal investigators and ‘supergroups’ composed of scientists from different fields.