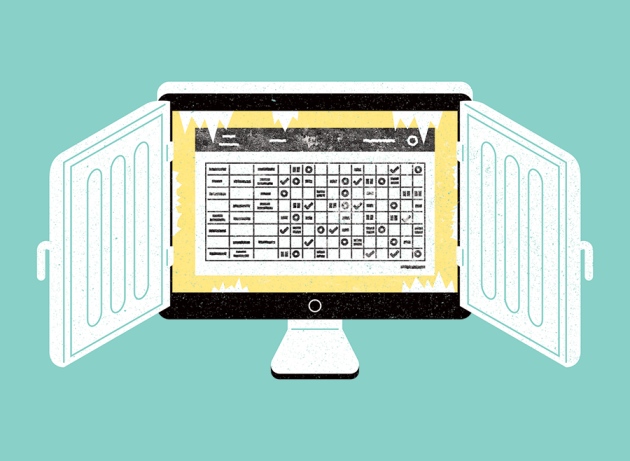 When Marilyn Goudreault received a request for plasmids stored in the repository of the laboratory she manages at the Lunenfeld–Tanenbaum Research Institute in Toronto, Canada, there was never any question whether she would honour it. Reagent sharing is typically a precondition of publication in peer-reviewed journals, and is fundamental to the scientific process. But first, Goudreault would have to find the plasmids — circular strings of DNA.

In many labs, the task might have required a tortuous search through old notebooks, out-of-date spreadsheets and frost-encrusted freezer boxes. But in Goudreault's lab, reagents are tracked with OpenFreezer: a free, web-based system designed to document data such as the location, source, creator and biological properties of every reagent in a user's possession — including not just plasmids, but also antibodies and stretches of DNA, RNA and protein. Goudreault needed only to run a quick search for the materials, then retrieve the indicated boxes from storage. “I had everything within 15 minutes,” she says.

OpenFreezer is one of a number of computerized inventory systems developed to simplify lab management. They range from simple homespun databases for individual labs to enterprise-level systems, and accommodate a range of budgets. Some are designed for documenting frozen samples; others for tracking chemicals or lab animals. Some facilitate purchasing and equipment scheduling; others are limited to simple descriptions. But in all cases, the goal is to ensure that lab workers know what resources are available to them, and where to find them.

Many labs track their inventories with nothing more than sheets of paper in a binder or entries in an Excel spreadsheet. But some are using more-sophisticated database software. In the late 1990s, for example, virologist Joe Mymryk created a Microsoft Access database to track key reagents when he set up his lab at Western University in London, Canada. In 2007, his graduate student Ahmed Yousef joined Ibrahim Baggili, a computer-science graduate student then at Purdue University in West Lafayette, Indiana, to develop a friendlier, Windows-based interface to the system, called LINA (Laboratory Inventory Network Application; A. F. Yousef et al. J. Lab. Automat. 16, 82–89; 2011).

LINA draws from a series of Access databases — one for each class of reagent, including bacterial and yeast strains and short sequences of DNA and RNA known as oligonucleotides. As new reagents are developed or acquired, they are logged in the system, which assigns each one a unique identifier. Samples are then organized in freezer boxes according to those numbers and users can search the database by keyword, source and function.

For Mymryk, LINA's most useful feature is a tool to search and compare DNA sequences. This means that he can enter a gene sequence and check whether the library contains any oligonucleotides that could be used to amplify it, rather than just ordering new ones. “The oligo thing has really saved my bacon,” he says.

LINA is free and simple to use, which makes it particularly attractive for small molecular-biology labs. But more-advanced options are also available at no cost. Marie Ebersole, who manages the chemistry preparation room at Wellesley College in Massachusetts, opted to upgrade her Excel-based system to Quartzy, a free cloud-based system that allows her to track purchases for her 1,000-reagent collection. Quartzy's zero cost figured prominently in her decision. “I didn't have to have 'buy-in' from 12 different people in 3 departments, and I could upload my existing spreadsheets,” she says.

Ebersole uses Quartzy mainly for tracking dry and liquid chemicals. But it can also track freezer boxes, so that users know precisely what each slot of a given container holds. When stocks run low, users click on a button to reorder, and the system automatically alerts the manager so that she or he can track the order's status. (The system is able to offer its service for free because it incorporates catalogues from several reagent vendors, and suggests those products when orders are placed.) Other features include support for tracking barcodes attached to individual samples, as well as equipment scheduling and document management for maintaining lab manuals and the like.

For Ebersole, Quartzy's features not only improve the efficiency of the lab, they cut down on her costs. “I've saved about a third of my budget,” she says. In part, that is because there is less waste: by knowing precisely what chemicals she has to hand, Ebersole can use up old reagents before buying fresh ones. And when she does buy new chemicals, she says, she can do so in smaller quantities than before.

“We believe that providing high-quality metadata for reagents and methods coupled with linkage to experimental data will help to improve the reproducibility problem.”

Another option is StrainControl, which has been developed by DNA Globe of Umeå, Sweden. The software is free for individual researchers in small labs; a professional licence for 10 users costs US$79.95; and a 50-user licence costs $649.95. Both of the paid versions allow the software to be used on a computer network or cloud-based service.

Although its name evokes images of fruit flies and mice, StrainControl can accommodate the resources of most wet-lab biologists, says Kristoffer Lindell, DNA Globe's external-relations manager. The software, which has some 15,000 users, provides support for different lab-organism strains, proteins, plasmids, antibodies and chemicals, and like some other tools, is compatible with sample barcoding. Users can rename any of the fields to suit their needs, Lindell says; as a result, StrainControl can be used to catalogue anything, whether lab-related or not. An imminent update will allow users to add one or two custom modules to the database (not just reconfigure existing ones), for tasks such as tracking references.

Other systems are more specialized. A lab information-management system (LIMS) called mLIMS, developed by BioInfoRx in Madison, Wisconsin, is designed to track rodent colonies, for instance. Some also offer connectivity to electronic notebooks. Labguru, for instance, is a cloud-based application that tracks plasmids, bacteria, antibodies, plants, rodents and proteins and has a built-in electronic notebook, says product specialist Xavier Armand. Developed with investment from Nature's parent company, Holtzbrinck Publishing Group in Stuttgart, Germany, Labguru costs $120 per user per year for academics and $450 per user per year for industry labs and is produced by BioData in Cambridge, Massachusetts.

Usually, Armand explains, inventories and electronic lab notebooks connect details about each sample to experimental results, so users can track which reagents were used in which experiments. “We believe that providing high-fidelity metadata for reagents and methods coupled with linkage to experimental data will help to improve the reproducibility problem,” he explains. It should make it easier for researchers to duplicate the findings of their own and other labs' experiments. Similarly, Freezer Web Access and Lab Inventory, both from ATGC Labs in Potomac, Maryland, allow users to link their reagents to a LIMS. Software developer Pavel Bolotov says that both applications cost $150 per user and $350 per server installation — plus $1,000–20,000 for customization.

Some research institutes and companies centralize inventory management at a large scale. The office of Environmental Health & Radiation Safety (EHRS) at the University of Pennsylvania in Philadelphia has spent the past several years moving its 700 lab groups to the unified system CISPro, which is developed by BIOVIA (formerly Accelrys) in San Diego, California. According to EHRS lab-safety specialist Kimberly Bush, institution-wide tracking facilitates three key tasks: compliance reporting (for example, whether the university is meeting building-code limits on flammable materials), cross-lab material sharing and university-wide reagent monitoring. “Those are difficult or impossible to accomplish if there are 700 standalone inventory systems,” she says.

In 2011, the EHRS received $50,000 from the Penn Green Fund, a university sustainability initiative, to implement CISPro as part of an effort to reduce waste and consolidate inventory management. Today, only about one in eight labs is on-board. The roll-out has been anything but smooth, Bush says, and exemplifies the challenges of inventory tracking. Because the university's chemical purchases do not go through a central office, each lab has to be trained to create and upload its own inventories. And the process of creating the database is cumbersome and error-prone. For instance, a chemical might have multiple names, and inconsistencies in database set-up and material logging can make the chemical difficult to recall at a later date, leading to unnecessary reordering. Thus, she notes, some users actually maintain two systems, “but that's duplicate effort”.

Furthermore, CISPro is designed to give every chemical container a unique barcode. But for users that consume bottle after bottle of a given solvent, the repetitive logging can become tedious. In that case, says Bush, users might reserve and reuse a handful of barcodes on the door of the flammables cabinet. “To keep an inventory as accurate as possible you have to consider both the chemicals and the users' workflow,” she advises.

Whichever tracking system researchers choose, they can be confident at least of this: they need never be at a loss for their lab's resources again. If nothing else, says Mymryk, that could save researchers some awkward moments: “There's nothing more embarrassing than having to ask for the same reagent twice.”