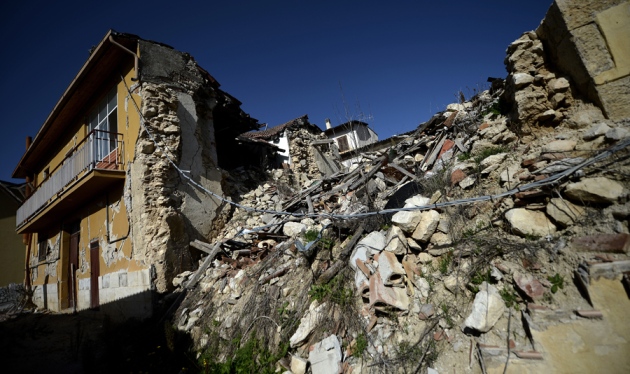 Official reassurances convinced many residents of L’Aquila that the earthquake risk was low, a factor that many blame for the 2009 quake’s high death toll.

To scientists in Italy, offering advice on risks looks to be a hazard in itself. In the aftermath of a judge’s decision to sentence a group of seismic-risk experts to six years in prison, researchers in the country are demanding that legal safeguards be put in place for advisers, and that a clear division of responsibilities be made between scientific experts and government decision-makers.

On 22 October, a court in L’Aquila found six scientists and one government official guilty of playing down earthquake risks in the region just days before a devastating earthquake hit the city on 6 April 2009. Prosecutors had argued that the group’s assessment of a surge in seismic activity, and a subsequent press conference involving two members of the group, focused on simply reassuring the public rather than providing a careful evaluation of the potential hazards. Residents of L’Aquila say that they typically leave their homes when swarms of tremors shake the region, but the calming messages from the experts, the court heard, persuaded dozens of people to stay indoors. Many then perished as numerous buildings collapsed during the magnitude-6.3 quake (see Nature 477, 264–269; 2011).

The severity of the sentences, however, surprised many — even the public prosecutor, Fabio Picuti, who had sought terms of four years — and condemnation quickly followed from the global scientific community (see Nature 490, 446; 2012).

Stefano Gresta, president of Italy’s National Institute of Geophysics and Volcanology in Rome (where two of the convicted scientists worked) said at the time that the verdict “is likely to compromise the right/duty of scientists to take part in the public debate” because they will be “in fear of being convicted”. Statements of support for the scientists came from the American Geophysical Union, the Geological Society of America, the International Human Rights Network of Academies and Scholarly Societies and the science-promotion group Euroscience. The US National Academy of Sciences and the Royal Society, UK, issued a joint statement saying that the verdict “could lead to a situation in which scientists will be afraid to give expert opinion for fear of prosecution or reprisal”. And the chief scientific adviser to the European Commission, Anne Glover, told Nature that she is concerned about the fallout from the case. “It may become more difficult to motivate scientists to advise on inherently uncertain issues,” she says.

The verdict will set no legal precedent abroad. But there is a risk that L’Aquila could become an “informal precedent, in that it breaks down an aura of immunity surrounding science”, says Sheila Jasanoff, who specializes on the intersection of science and the law at Harvard Kennedy School in Cambridge, Massachusetts. “People and lawyers may be more willing to sue when they feel bad advice has been given.”

The day after the verdict, Luciano Maiani resigned as President of Italy’s major risks commission, the expert panel that advises the national government on environmental hazards. Most of the convicted scientists had given their assessment of the seismic risk at L’Aquila as serving members of the committee. Maiani says that he was protesting not the verdict itself but the lack of legal protection for his committee.

“Scientists are not elected, so it cannot be up to them to decide how to deal with an emergency.”

Maiani, a physicist at the University of Rome, La Sapienza, and former director-general of CERN, Europe’s particle-physics facility near Geneva in Switzerland, says that, since taking up his post at the beginning of this year, he has been asking the government to commit legal assistance to the committee members, as well as financial insurance in case of civil proceedings, but his requests have been refused. “This way it is impossible to give truly independent advice,” he argues. “The obvious consequence is that scientists will tend to be more conservative in their advice, like some medical doctors who order too many tests and surgeries for fear of being sued. But this is not in society’s best interest.”

The full reasoning behind the verdict is not yet public, leaving some Italian legal experts baffled as to why the judge issued such a heavy sentence, making no distinction between scientists in an advisory role and government officials entitled to take decisions and speak to the public. “Normally, the official who asks for expert advice remains legally responsible for the actions he then takes, unless the advice was wilfully and seriously wrong,” says Stefano Rodotà, a legal specialist at La Sapienza and a former member of the Italian Parliament.

Glover says that the case underlines the importance of having clear rules on how scientific advice is given and used. “Before a scientist gives advice, it should be crystal clear to him or her what someone else is going to do with it”, she says, but, ultimately, elected officials should be held responsible for decisions resulting from this process. “Scientists are not elected, so it cannot be up to them to decide how to deal with an emergency,” Glover says.

Many scientists contacted by Nature agree that better legal protection, along with transparent guidelines about the obligations of science advisers, are long overdue in Italy. “The case resulted from the fact that the legal role of scientific advisers is still not well defined in Italy,” says Mariachiara Tallacchini, who studies science-related legal issues at the Catholic University of Piacenza. “Countries such as the United Kingdom and the United States are more advanced in regulating science policy”.

John Beddington, the UK chief scientific adviser, agrees. “I do not think such an outcome would be possible in the United Kingdom, unless the advice was demonstrably grossly negligent or wilfully malicious,” he told Nature. “And in the case of civil proceedings, all advisers are indemnified by government.” Similar protection is granted to science advisers in the United States, where seismologists advising national and state governments would be immune from such prosecution.

In Italy, there may be no time for reform before the next crisis. On 26 October, a magnitude-5.0 earthquake hit the Pollino region in the south of the country, where shocks have been going on for months — a situation very similar to that seen in L’Aquila in 2009. Maiani, who has not yet left the major risks commission, says that he and the other committee members will continue to serve during the current emergency.

Late on 30 October, Luciano Maiani announced that he had "suspended" his resignation after he received "some reassuring signals" from the government about his requests.