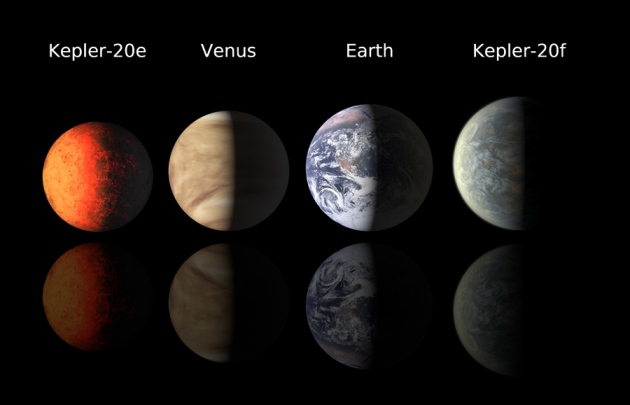 Kepler-20 e and Kepler-20 f, the smallest planets yet discovered outside the Solar System, are about the size of Venus and Earth, respectively.

NASA's Kepler telescope has reached one of its major mission milestones: finding an Earth-sized planet outside the Solar System. What is more, it has done it twice in the same star system. Whizzing around the star Kepler-20, about 290 parsecs (946 light years) from Earth, is not only an Earth-sized planet, but also something just a touch smaller — a Venus.

“It’s the beginning of an era,” says Francois Fressin, an astronomer at the Harvard–Smithsonian Center for Astrophysics in Cambridge, Massachusetts. Fressin is the lead author of a paper describing the discovery that is published today in Nature1. “We’ll soon be able to detect these kind of planets around other stars and at other distances,” he says.

The smallest exoplanet previously known was another Kepler discovery, which has a radius 1.4 times that of Earth. Kepler spots planets that cross the face of their host stars and dim the star's light, but it has a difficult time when they are this small. Researchers need to record many planetary transits to gain statistical confidence in their discoveries. “There was a goal line and that was a planet the size of the Earth,” says David Charbonneau, an astronomer also at the Havard–Smithsonian Center, and a co-author of the paper. “We’ve now reached that goal line.”

The two planets, which orbit much closer to their star than Mercury is to the Sun, are nowhere near a habitable zone — so it is hard to fantasize about warm oceans on them nourishing the kernels of life. The smaller of the two planets, dubbed Kepler-20 e, is about the size of Venus, with a radius 0.87 times that of Earth. It orbits its star every 6 Earth days and sits at a temperature of 1,040 Kelvin — hot enough to vaporize any atmosphere and leave a solid hunk of silica- and iron-rich rock. Kepler-20 f, the larger planet with a radius 1.03 times that of Earth, has a 20-day orbit. As a result, it is a bit less scorching, at 705 Kelvin. At that temperature, says Fressin, hydrogen and helium wouldn’t survive in the atmosphere, but a shroud of water vapour might.

Both planets are thought to be tidally locked, facing their star without spinning on their axes, so that one side is constantly in darkness, and the other constantly in light. But that means that parts of the planet are in perpetual twilight, and Fressin says it is possible that these areas might have temperatures more suitable for life. “But I don’t want to sell them as habitable,” he says.

The confirmation of the planets' discovery was unusual. Typically, researchers attempting to confirm Kepler candidate planets pursue follow-up observations with ground-based telescopes that are sensitive to the mass of the planet and the wobble that its gravitational pull causes on the parent star. But these planets were so small that their gravitational pull could not be confirmed in 12 hours of observation on one of the twin 10-metre Keck telescopes on Mauna Kea in Hawaii.

Instead, the team turned to statistical justification. Part of the researchers' certainty in the validity of their observations came from the sheer number of transits that they observed, owing to the short period of the planets' orbits. Furthermore, the two new planets are part of a system that harbours three others (see video) — and any transiting signal that lies in the same orbital plane as recognized planets is very unlikely to be a false positive. Finally, the team had a high-resolution image of the star from the 5.1-metre Hale Telescope at Palomar Observatory in California that helped to rule out the possibility that a background star was affecting the brightness of Kepler 20.

Charbonneau says that scientists will still want to work out the mass of these small planets to calculate their densities. For that, they will need more sensitive instrumentation, such as the HARPS-North radial-velocity spectrometer, which is set to see first light in April 2012 at the 3.6-metre National Galileo Telescope on La Palma in the Canary Islands.

Jonathan Fortney, an astronomer at the University of California, Santa Cruz, says that the study “shows that Kepler can do things that no other telescope can do”. He adds that the two small planets are “quite strange”, mostly because they are sandwiched between three larger planets that range in size between super-Earths and mini-Neptunes. This is surprising for modellers, because the structure of our solar system suggets that larger, gaseous planets are typically segregated from smaller, rocky ones. Different-sized planets “do not mingle in the Solar System, but apparently in this system they do”, says Charbonneau. “These sorts of shockers have become the norm for exoplanets.”