Even in this age of texts, tweets and sound bites, most scientific papers remain long and dense. But the latest online journal promises to bring a little brevity to science by accepting submissions of 200 words or less. The Journal of Brief Ideas has published only a few papers so far, but has already generated buzz on social media. Katie Mack, an astrophysicist at Melbourne University in Australia, urged her many Twitter followers to check it out. 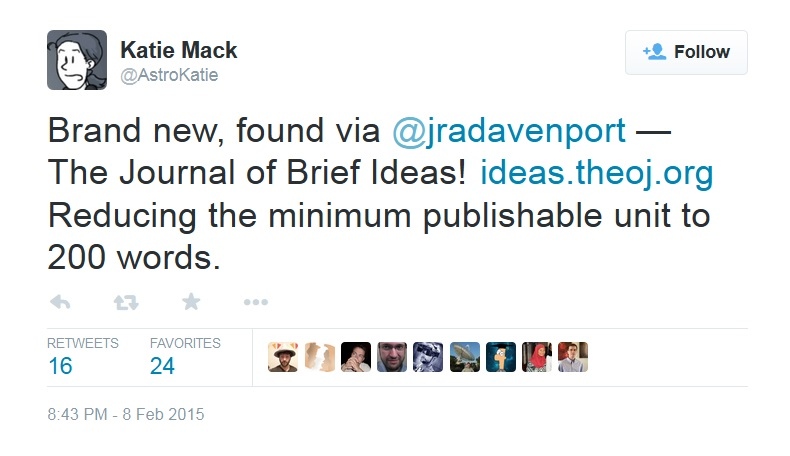 But Mack also cautions that it could turn into a collection of preliminary ideas that are not ready for scientific consumption.

Commenters quickly drew comparisons between the journal and Twitter’s 140-character limit. But journal co-founder and editor-in-chief David Harris, a physicist turned science journalist, says that its articles are real papers and much more substantial than tweets. Each article receives a DOI (digital object identifier), a unique number that allows the paper to be archived and cited. The papers are not peer reviewed before being published, he adds, but he and his team are developing a method for ranking articles that includes ratings from readers.

The journal enables scientists to publish concepts and findings without having to spend months producing a lengthy paper, he explains. “Good scientists have far more ideas than they know what to do with,” Harris says. “It would be better to get that work out into circulation.”

The handful of papers already published includes a report by James Davenport, a PhD candidate in astronomy at the University of Washington in Seattle. He suggests in his article that the halo of dark matter surrounding the Milky Way could act as a gravitational lens that would affect the apparent brightness of distant galaxies. Davenport says that writing the article, which weighs in at a mere 151 words (164 including the title), took about as much time as writing a quick blog post. But he is concerned that the journal has too little oversight to ensure that the papers are coherent or meaningful. “The lack of editorial control will be a big challenge,” he says.

Harris says that he isn’t interested in “policing” papers that are submitted to the journal, although he will keep an eye out for anything offensive. The rating system, he says, should filter out work that has limited appeal.

Mack says that she appreciates any attempt to open up scientific dialogue, but doesn’t envision big things for the journal. “This is an interesting experiment, but it’s not a sign of things to come,” she says. “There is a risk of it being just a bunch of half-formed thoughts.”