The Italian research minister, Francesco Profumo, has bowed to pressure from Italian and international scientists and agreed to take a closer look at a proposed nuclear research programme at one of the country’s leading institutes. He has also withdrawn his nomination of a proponent of the controversial research for the institute’s scientific council.

The research — on piezonuclear fission, the theory that compressing solids can provoke nucleus-splitting reactions without emitting γ-rays or producing nuclear waste — was being led by Alberto Carpinteri, a structural engineer and president of the Italian National Institute of Metrological Research (INRIM) in Turin. Carpinteri and his collaborators have published a series of papers on the theme, mostly in Strain, a journal for which Carpinteri is on the editorial board. 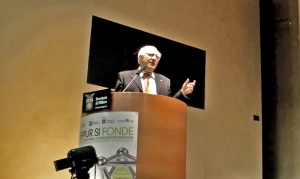 Alberto Carpinteri, president of the Italian National Institute of Metrological Research, is a proponent of piezonuclear fission, a theory that is not widely accepted.

But the theory is widely disputed. “The experiments are badly described and no other groups have been able to reproduce them so far,” says Ezio Puppin, a nuclear engineer at Milan Polytechnic.

So some INRIM scientists were appalled to see that the institute's 2012–14 scientific plan and 10-year vision, published in February, said that the institute would apply for funding for piezonuclear fission research under the “awarded projects” programme — a series of grants that the government awards to the most deserving institutes. “We fear that our international reputation could be damaged,” says Giorgio Bertotti, a physicist and member of the INRIM’s scientific council who had opposed the inclusion of piezonuclear research in the plans. Carpinteri says the plan was to apply for €500,000 (US$627,000) over three years.

Researchers were also alarmed at the science ministry’s plan to nominate Fabio Cardone, a physicist who collaborates with Carpinteri on piezonuclear fission, for a vacant position on the council. “Carpinteri could take advantage of his position, use public money for unsound science and ultimately make a joke of Italian research,” says Puppin. He points out that other institutes are responsible for doing research in the nuclear field, such as the Italian National agency for New Technologies, Energy and Sustainable Economic Development (ENEA) and the National Institute of Nuclear Physics (INFN), both of which are based in Rome.

Carpinteri counters that INRIM “is the right institution to prove these physical phenomena in the lab and perform neutron emission and chemical composition measurements”. He says that the institute will collaborate with the National Research Council, the ENEA and Turin Polytechnic, where Carpinteri worked before leading the INRIM.

On 24 May, Puppin launched an online petition that urged Profumo to investigate and take action on the INRIM’s announced priorities. It has been signed by more than 1,000 researchers, including 50 from the INRIM.

The minister has now agreed to the petitioners’ demands. He says that the piezonuclear proposal will undergo rigorous peer review, and he has withdrawn Cardone’s nomination for the council, putting forward two other candidates instead: Elisabeth Giacobino, a physicist at the Ecole Normale Superieure, Université Paris VI in France and Ernst Otto Göbel, former president of the German metrology institute PTB.

Puppin is pleased with the result. “This new stance of the Minister was the right thing to do and is the result of our successful petition,” he says. Carpinteri, however, is disappointed. “I hope the peer review is a correct one, not a simple collection of signatures”, he says, adding that research should be financed even if it’s controversial and not accepted by the whole scientific community.

Walter Tocci, a member of Italy's centre-left Democratic party who has raised the INRIM case in the Italian chamber of deputies, acknowledges the role that the members of the scientific council have. “Respected scientists within the council can ensure that the institute’s strategic choices are scientifically sound,” he says.

Carpinteri is nonetheless determined to continue his research, and says he will not resign his position. “The INRIM will follow the ministry's decisions, but I will continue to do my curiosity-driven research on piezonuclear at the Turin Polytechnic,” he says.