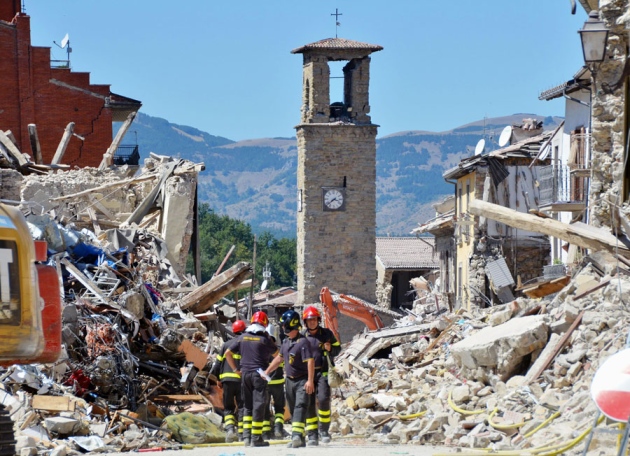 The village of Amatrice was devastated by the earthquake that hit central Italy.

A devastating 6.2-magnitude earthquake in central Italy on 24 August that killed more than 290 people was the country’s largest since a magnitude-6.3 earthquake in 2009 that hit the town of L’Aquila, about 40 kilometres away. That event killed 308 people, destroyed tens of thousands of homes and a university. Controversially, it also caused six scientists to be put on trial for manslaughter.

The latest quake also injured hundreds and laid waste to historic villages in the Apennine mountains, including Amatrice (see ‘Epicentre of a quake’). It was a result of increased horizontal stress perpendicular to the mountain chain.

Seismologists had expected a rupture to occur near the location at any time. Still, Giulio Selvaggi, a research director at the National Institute of Geophysics and Volcanology in Rome, and one of those initially convicted of manslaughter — all six were cleared on appeal — says he was shocked by the death and destruction wreaked by last week’s quake. The mountainous region around Amatrice is sparsely populated, but the final death toll may exceed that of more populated and urbanized L’Aquila. 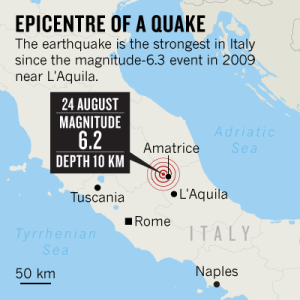 Selvaggi seconds a public outcry over the failure of authorities to prioritize making old buildings more earthquake-resistant and notes that his team supplies earthquake maps to them. “We scientists have made a beautiful, detailed seismic hazard map, showing clearly the areas in greatest need of preventive measures,” he says. “But public authorities don’t take enough action.”

The court case over the L’Aquila earthquake came about because a local amateur researcher claimed to have evidence of an imminent, large quake. Six scientists and one government official who had publicly dismissed the amateur’s methods were accused of misinforming the public. Following an unprecedented trial, all seven were given six-year jail sentences for manslaughter, but the scientists were cleared on appeal in 2014.

Computer scientist Paola Inverardi, who is rector of the university in L’Aquila, says the rebuilding of the university is nearly complete, and that research activities had resumed by 2012. Science in the region has also benefited from supporting initiatives following the quake, she says. One of these is the Gran Sasso Science Institute, an international graduate school founded in 2012 to inject young intellectual life into L’Aquila. It has been so successful that in June it was awarded university status.

Unlike the earthquake in L’Aquila, which was preceded by frequent, mostly low-magnitude, tremors in the surrounding area, no seismic activity was recorded before the latest earthquake. “It came out of the blue, without the preceding tremors we experienced in ‘our’ earthquake,” says Inverardi. L’Aquila itself experienced virtually no damage, but, she says, “psychologically we were all pushed back”.