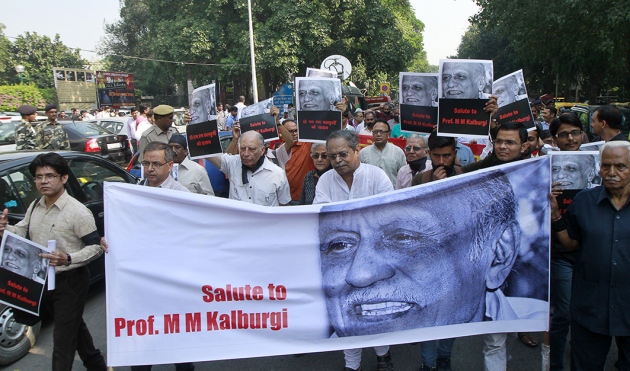 Leading Indian scientists have voiced concerns during the past week over religious intolerance and the killings of three noted advocates of rational thinking.

The action is an unusual occurrence in a country where scientists rarely step out of their research domains to comment on social or political issues. It follows an outcry by leading writers, who since September have been returning their national awards in protest against what they see as the government's failure to curb religious intolerance in India.

Anti-superstition activist Narendra Dabholkar was killed in 2013, communist politician Govind Pansare in February of this year and literature scholar Malleshappa Kalburgi in August. All three killings have been blamed on members of extreme right-wing Hindu groups. The killing of Kalburgi triggered the protests from the writers, which intensified early this month after a mob in a town near New Delhi killed a Muslim man who was rumoured to have slaughtered a cow (Hinduism considers cows to be sacred animals).

On 22 October, a group of scientists followed up the writers' protest by launching an online petition to India's president, Pranab Mukherjee, protesting against the killings. It gathered 268 signatories.

“Yet,” it continued, ”we note with sadness and growing anxiety several of [sic] statements and actions which run counter to this constitutional requirement of every citizen of India,” and which should be “nipped in the bud”.

Indira Nath, a member of the panel and an immunologist at the Indian National Science Academy in New Delhi, says that the panel wants to: “bring back rationality and scientific thinking to the mainstream. It is an apolitical statement and not directed against the government of the day.”

A day later, more than 100 scientists from leading Indian science institutes, including national award winners, three fellows of the UK Royal Society and a foreign associate of the US National Academy of Sciences, signed a second statement expressing deep concern over the “climate of intolerance and the ways in which science and reason are being eroded in the country”. The scientists lamented what they called “active promotion of irrational and sectarian thought by important functionaries of the government”.

Thiagarajan Jayaraman, who is chair of the Centre for Science, Technology and Society at the Tata Institute of Social Sciences in Mumbai and a lead signatory on the second statement, mentioned the example of a statement made by Prime Minister Narendra Modi in October 2014. Modi said that the Hindu elephant-headed deity Ganesha was an example of knowledge of transplantation in ancient India, and that the birth of some mythological characters in the ancient Indian text Mahabharata reflected knowledge of advanced genetics and stem cells.

Naresh Dadhich, a physicist at the Inter-University Centre for Astronomy and Astrophysics in Pune, India, and one of the petitioners to the Indian president, says that “the government has failed to check or discourage the anti-rational environment”.

All three advocates who were killed were “widely regarded by the scientific community as part of efforts to promote science among the public”, Jayaraman adds.

Pushpa Mittra Bhargava, former director of the Centre for Cellular and Molecular Biology, says that he plans to return a national award in protest. “Science is about reason and rationality. If three rationalists can be killed, scientists too can be killed.”

On 29 October, a group of Indian historians joined the fray by releasing their own statement protesting against religious superstition. Groups of artists and sociologists have also issued similar statements.