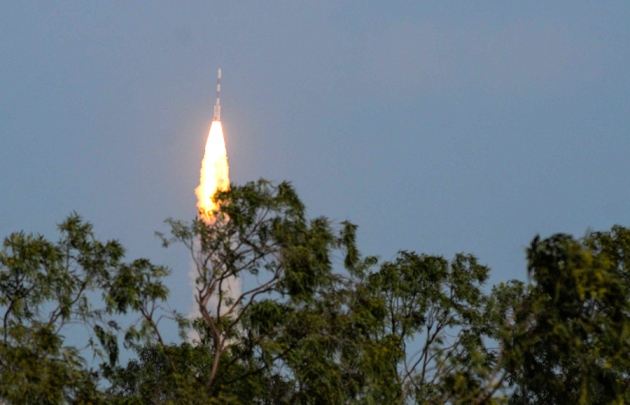 India’s first mission to Mars has successfully blasted off on its 300-day journey to the red planet. The Mars Orbiter Mission, or Mangalyaan, launched from the Satish Dhawan Space Centre at Sriharikota on 5 November. It is scheduled to start circling the planet and taking data in September 2014.

"The journey has just begun," said a beaming Koppillil Radhakrishnan, chairman of the Indian Space Research Organisation (ISRO), in a televised statement.

Mangalyaan — a mostly home-grown effort assembled by several thousand personnel over two years — is expected to cost India around US$75 million. NASA will provide communication and navigation support to track Mangalyaan when it is not visible in India.

The probe is set for a 780-million-kilometre journey. It will circle Earth for several days to gather enough velocity to shoot off towards Mars, before entering Martian orbit in September 2014, where it will study the planet's geology and atmosphere for 6 months.

In the history of space exploration, nearly two-thirds of all space missions to Mars have failed. If successful, Mangalyaan will catapult ISRO into the elite club of organizations that have reached Mars orbit, along with NASA, the Soviet space programme and the European Space Agency. 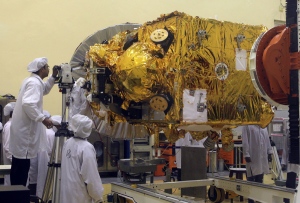 Engineers working on the spacecraft in Bangalore in September.

The orbiter carries five India-built, solar-powered instruments to study Martian atmosphere and geology. They will look for signs of methane in the atmosphere; measure the ratio of deuterium to hydrogen to study the presence of water; map the planet’s surface composition and mineralogy; and take high-resolution colour images.

Astrobiologists are interested in methane because it could be a waste product from living organisms and could therefore be a sign of life. NASA's Curiosity rover has not found any signs of methane since it landed on the red planet in August 2012. "I will be waiting anxiously to find out if Mangalyaan's methane sensor detects any puffs of methane as it maps the planet," says Sushil Atreya, director of the planetary science laboratory at the University of Michigan in Ann Arbor, who has worked with NASA’s Mars Science Laboratory mission and Curiosity.

Mangalyaan has faced strident criticism from those who believe that India can ill afford expensive planetary missions. Indian space scientists retort that the Indian space programme gets a mere 0.34% of the central government’s budget, and that only 7–8% of that is spent on space exploration.

In recent years, Japan and especially China have also ramped up their space efforts and capabilities, attempting — but so far failing — to reach Mars. Indian strategic experts view Chinese space advancements with suspicion, because the two countries have historically had less-than-friendly relations: India suffered a humiliating defeat in a 1962 war, and has seen repeated border incursions that continued until recently. Chinese tests of anti-satellite weapons in 2007 caused global concern.

“India’s space programme is for peaceful purposes but as a major space-faring nation, it has genuine concerns regarding the security of its space assets,” says Arvind Gupta, director-general of the Institute of Defence Studies and Analysis, a government-supported think tank in New Delhi. “While there is no India-specific threat from space [from China], India cannot ignore the implications of the growing militarization of space.”

In April last year, India successfully tested the 5,500-kilometre Agni-V Intermediate Range Ballistic Missile. The country's Defence Research and Development Organisation announced that it had acquired anti-satellite weapons capability as a deterrent against the Chinese threat.

In October 2008, India launched an unmanned lunar probe, Chandrayaan-1, credited with discovering water molecules on the Moon using a NASA-built instrument. Chandrayaan-1 was meant to operate for two years, but suffered technical failures and stopped functioning after 312 days. ISRO learnt from its failures, and considers Mangalyaan a significant technological upgrade.

In 2015, ISRO will launch an ambitious space-based astronomical observatory, ASTROSAT. The country is also considering a follow-up mission to the Moon, one to study the solar corona and a second mission to Mars, says A. S. Kiran Kumar, director of the Space Applications Centre at Ahmedabad.