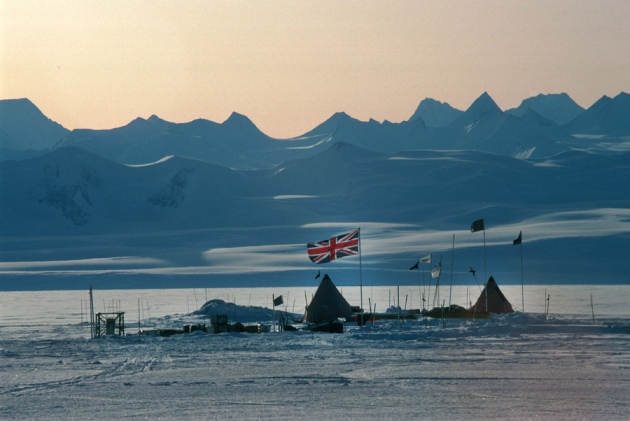 A British field camp in Antarctica will soon host efforts to drill through the ice to reach Lake Ellsworth.

Nestled in a steep fjord beneath three kilometres of Antarctic ice, the lost world of Lake Ellsworth has haunted Martin Siegert’s dreams ever since he got involved in subglacial research a dozen years ago. Finally, the time has come for him to explore its mysterious waters.

Next week, Siegert, a glaciologist at the University of Bristol, UK, packs his bags for the long journey to the opposite end of the world. Once he has reached the Rothera Research Station of the British Antarctic Survey (BAS) on an island off the Antarctic Peninsula, he and his science crew will fly about 1,000 kilometres into western Antarctica. On 5 December, the real work begins: drilling straight down through the ice to the pristine lake beneath. In its shadowy waters they hope to find forms of life that have not seen the light of day in millions of years (see ‘Trapped under ice’). And in the lake bed sediments, the team will search for records of the poorly understood history of the West Antarctic Ice Sheet, potentially revealing how the mighty glacier has waxed and waned over time.

Is Siegert excited? “This is the very pinnacle of the science I’ve been doing since the turn of the millennium,” he says. “Now guess if I’m excited.”

Almost 380 subglacial lakes have been discovered and mapped in Antarctica,and have been explored remotely with ice-penetrating radar, gravity measurements and seismic investigations (A. Wright and M. Siegert Antarctic Science http://doi.org/jsn; 2012). These ancient lakes, large and small, owe their existence to geothermal heat that melts the Antarctic ice from below. Gravity and ice pressure force the melt water to flow, and it collects in the hollows and valleys of the continent under the ice. 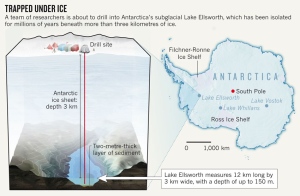 If all goes to plan, Lake Ellsworth will be the second such lake to be breached. In February, a Russian team penetrated Lake Vostok — the largest and deepest Antarctic lake — completing a project that was launched more than 20 years ago (see Nature 482, 287; 2012). And a third effort is about to begin: next week, a US drilling team will set out for McMurdo Station in Antarctica. In January, the researchers will move to their target — subglacial Lake Whillans, a small, shallow body of water close to the edge of the Ross Ice Shelf.

The quest to find exotic microbial life that may have evolved in or beneath these lakes is for many the most thrilling aspect of the research. Scientists have discovered a catalogue of bacteria elsewhere that mine their energy from rocks and minerals, and many assume that specialized microbes living in Antarctica’s hidden lakes might do the same.

“Life exists in extreme ecosystems, from the deep lithosphere to the high atmosphere,” says David Pearce, an environmental microbiologist with the BAS who will join the UK expedition. “I would be incredibly surprised if we get there and find no organisms at all.”

The Lake Vostok team found evidence that heat-loving bacteria may live in the bedrock surrounding that lake. The clues came from DNA in sediment that had become trapped in accretion ice — the lake water that freezes to the bottom of the massive glacier (S. A. Bulat et al. Adv. Space Res. 48, 697–701; 2011).

But the upper layers of the lake itself seem to be lifeless, reported Sergey Bulat, a microbiologist at the Petersburg Nuclear Physics Institute in Russia, at the 12th European Workshop on Astrobiology in Stockholm last month. No native microbes turned up in a preliminary analysis of lake water that had frozen onto the Russians’ drill bit, although the team will return to the site this season to collect more samples.

Lake Ellsworth might be a better bet for microbe-hunters, because it offers fewer hiding places. At roughly 12 kilometres long by 3 kilometres wide, with a depth of around 150 metres, it is but a puddle compared with the vast Lake Vostok. Measuring about 250 kilometres long by 50 kilometres wide, Vostok ranks among the world’s largest freshwater bodies. Ellsworth is neatly settled in a subglacial valley near the continental divide, where the overlying ice moves at its slowest. At around −30 °C, ice at the site is also twice as ‘warm’ as the ice on the Vostok plateau in East Antarctica, and is thinner by almost a kilometre. All this will make Lake Ellsworth much easier to access and extensively sample than its prominent cousin, says Siegert.

Even if Ellsworth and Whillans turn out to be sterile, the exploration might provide clues about what constrains life on Earth and elsewhere in the Solar System. Siegert says that it would be a “phenomenal result” if the lakes were found to be devoid of life, because they offer everything that bacteria need — including liquid water and nutrients — and their water temperatures are just a few degrees below zero.

The UK team hopes to reach Ellsworth in a single three-day session, using a drill that will melt the ice with a high-pressure jet of water, heated to 90 °C. Once the borehole is finished, the team will have around 24 hours to deploy a water-sampling probe and a sediment corer before the hole refreezes.

“I would be incredibly surprised if we get there and find no organisms at all.”

The equipment, fastidiously prepared to make sure that it does not contaminate the lake with microbes from the surface, was approved last year by the parties to the Antarctic Treaty. Siegert reckons that drilling will consume some 60,000 litres of water, produced by melting snow at the site. The water will pass through a five-stage filtration system and then be treated with ultraviolet light to sterilize it. “The water we will use to melt into the lake is cleaner than the ice that naturally melts into the lake,” says Siegert. The 5-metre-long cylindrical titanium probe that will travel down the hole on the end of a tether, taking samples at different depths in the lake, was assembled in a clean room in Southampton, UK, and will be unwrapped from its sterilized bag only once it sits in the clean borehole.

The main challenge, says Siegert, will be to complete all sampling operations within the very short window of time. If things go badly, however, the team has enough fuel to reopen the hole by pumping in more hot water. If the probe gets lost or stuck, the researchers may drill a second hole and deploy a second set of sampling instruments. Indeed, they might do this anyway to get an extra round of sampling, potentially adding confidence to the scientific results, says Siegert.

If Lake Ellsworth does host life, it could be identified by the end of the year. But the exploration of Antarctica’s hidden lakes has just begun, says John Priscu, a glaciologist at Montana State University in Bozeman, who is overseeing the Lake Whillans foray. Data from more than just three sites are needed, he says, before scientists can hope to understand how the hidden lakes and rivers interact with the overlying ice sheet by lubricating its movement, for example. Studying more lakes could also reveal whether their discharges of minerals affect the chemistry and biological productivity of the Southern Ocean.

“We have come a long way since the time, not long ago, when people thought that Antarctica was but a benign block of ice,” says Priscu. “It makes me happy to see the excitement surrounding our science. But I’m afraid we know still less about Antarctica’s subglacial environments than we know about some places on Mars.”