Carnivorous plants catch their prey in pools, glue and snap traps. But researchers have now discovered the first species known to trap and digest worms underground, using adhesive leaves — and it is part of a family not believed to be carnivorous at all.

Native to the tropical savannah of the Brazilian Cerrado, the Philcoxia genus, part of the family Plantaginaceae, was first formally described in 20001. It consists of three species — P. bahiensis, P. minensis and P. goiasensis — each restricted to a distinct region characterized by sandy soils and lots of sunlight. 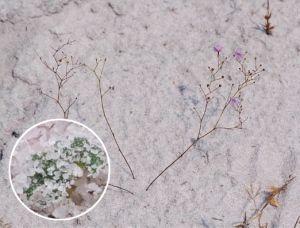 Carnivorous plants have been found with underground leaves (inset) used to trap nematodes.

The first scientists to document Philcoxia noted that the plants all have rounded leaves supported by stems and topped with glands that produce a sticky substance. These features are common to many carnivorous plants, but the researchers did not see any evidence of captured prey or remains associated with Philcoxia.

In 2007, intrigued by the plants’ similarities to other carnivorous species and the discovery of nematode worms stuck to Philcoxia leaf surfaces, a team of researchers from California and Brazil tested for the possibility of carnivory. Their work was inconclusive2.

A study published today in the Proceedings of the National Academy of Sciences3 not only offers evidence that Philcoxia species are indeed carnivorous, but also explains why this trait had gone undocumented. P. minensis, researchers found, uses a unique nutrient-acquisition mechanism: its sticky leaves are hidden below the sand.

“This leads to the question of whether there are other carnivorous plants out there in families not known for carnivory,” says Peter Fritsch, a botanist at the California Academy of Sciences in San Francisco, and co-author of both the latest study and the 2007 investigation.

Plant carnivory is known to occur in only 0.2% of flowering plant species. However, Fritsch and his colleagues suggest that this count may be an underestimate. In the words of Mark Chase, a botanist at the Royal Botanic Gardens, Kew, UK, and his colleagues, writing in a 2009 paper on carnivorous lineages, “We may be surrounded by many more murderous plants than we think.”4

Aaron Ellison, who studies the evolution of carnivorous plants at a Harvard University research site in Petersham, Massachusetts, disagrees. “I don’t think we’re underestimating the number of carnivorous plants,” he says, given how rare the trait is. But, he adds, on a certain level, carnivorous activity is nearly ubiquitous. “Almost all plants depend on a nitrogen and phosphorus cycle of decomposing organic matter — dead stuff to eat. We don’t call that carnivorous because they’re not actively attracting and eating meat. Instead we focus on the incredibly elaborate ways plants have evolved to get at mineral nutrients.”

Fritsch says, “The cost–benefit model explains the trade-off between the specific environmental conditions and the resources developed by the plant. There is a balance point where if there are not enough nutrients and enough light it can push a plant toward carnivorous syndrome.”

The Cerrado, which has seasonal moisture and a paucity of nutrients, is conducive to the development of carnivory. “It is the main habitat for carnivorous plants in Brazil,” says Fernando Rivadavia, a carnivorous-plant specialist from the International Carnivorous Plant Society.

Predatory plants typically grow side by side with non-carnivorous species, suggesting that this dramatic course of evolution is but one of myriad strategies suitable for any particular set of conditions. However, says Ellison, “the fact that multiple genera in different environments have developed carnivorous strategies suggests that this is not a difficult evolutionary step”.