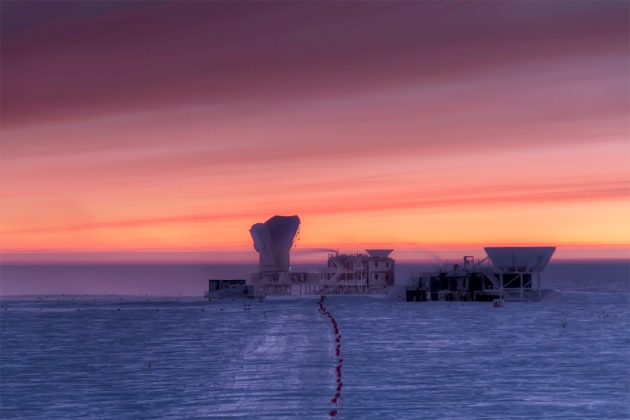 Telescopes in Antarctica track the cosmic microwave background radiation left over from the Big Bang.

US researchers have drafted plans to study the faint afterglow of the Big Bang using a new facility. They hope it will be sensitive enough to confirm whether or not the infant Universe underwent a brief period of explosive expansion known as inflation.

The Cosmic Microwave Background Stage-4 experiment (CMB-S4) would comprise three 6-metre and 14 half-metre telescopes distributed across two sites in Antarctica and Chile, according to a preliminary design due to be made public this week. Potentially up and running within a decade, the facility would be nearly 100 times as sensitive as existing ground-based CMB experiments.

It won’t be cheap, however. Construction will cost a little over US$400 million, according to the expert task force commissioned by the US Department of Energy (DOE) and National Science Foundation (NSF) to produce the design. That is at least twice as much as envisioned in a less-detailed review 3 years ago, and 30 times the cost of existing experiments.

The price tag is “not necessarily” a showstopper, says Richard Barvainis, who directs the NSF’s extragalactic astronomy and cosmology programme. But CMB-S4 will have to compete for limited funding with other large proposed facilities.

The CMB provides an image of the Universe as it was just 380,000 years after the Big Bang. Discovered in 1964, the radiation has since been observed by experiments on the ground, on balloons and in space, yielding increasingly precise insights into the Universe’s geometry, contents and age — currently calculated at a little under 14 billion years.

But physicists think that the CMB has more to offer. In particular, distinctive patterns in its polarization known as B modes could reveal the existence of primordial gravitational waves. Gravitational waves — ripples in space-time — were first observed directly in 2015, but their detection in the very early Universe would be a major breakthrough, providing the strongest evidence yet for inflation, according to Charles Lawrence, an astrophysicist at NASA’s Jet Propulsion Laboratory in Pasadena, California, who chairs the CMB-S4 task force.

Current ground-based CMB experiments typically detect microwaves using a few thousand pixels and are based either near the South Pole or in Chile’s Atacama Desert, where very dry conditions make the atmosphere nearly transparent to microwave radiation. None of the experiments has so far spotted the telltale B mode. One group did make a well-publicized claim in 2014, but it transpired that the sighting was actually caused by emissions from Galactic dust. Researchers are now building several more experiments that will be ten times as sensitive.

But Lawrence says that detecting the gravitational waves predicted by many of today’s models of inflation would require sensitivity boosted by a further order of magnitude. Hence CMB-S4, which would comprise nearly 400,000 pixels. If it, too, came up empty-handed, the task force writes, it might be necessary “to give up on inflation”.

CMB-S4 is too large for any single group to build, so researchers across the US started collaborating on the design in 2013. Their initial plans were approved a year later by a panel advising the DOE on particle physics. But they must wait until 2020 to see how they fare in the next round of the once-per-decade survey of astronomy and astrophysics that the NSF uses to assess funding priorities.

Barvainis says that the agency will support CMB-S4 only if it gets “a very high priority” in the decadal survey, which is also likely to include a proposed upgrade to the National Radio Astronomy Observatory’s Very Large Array in New Mexico, along with the development of one or more large optical telescopes. Even if the project does prevail, he adds, further agency reviews could delay the envisaged start of operations — due in 2026 — by at least two years.

The task force suggests that instead, CMB-S4 could be started by adding DOE detectors to existing telescopes in Chile while installing a few of the smaller telescopes at the South Pole. Under that strategy, the NSF would initially fund only operations. However, officials at the DOE also foresee snags. James Siegrist, the agency’s associate director for high-energy physics, says budgetary disagreements between the White House and Congress are creating “a lot of uncertainty” in Washington DC. A delay until 2027 or 2028 “could easily happen”, he predicts.