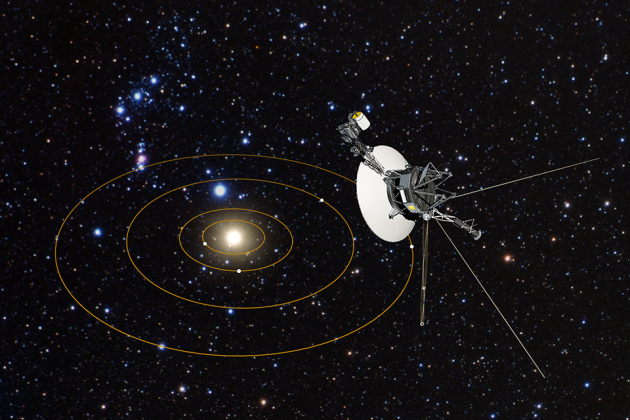 An artist's conception of Voyager 1, which is now in interstellar space, and the Solar System the probe left behind.

As they sail into interstellar space, NASA’s twin Voyager probes are entering a mysteriously complex realm. The spacecraft aren’t in completely uncharted territory though. Information from the Hubble Space Telescope is illuminating what may lay in front of the probes, revealing rich clouds of hydrogen along their path.

The work is a rare marriage of two of the most famous space missions — and an unprecedented glimpse at the realm between the stars.

“If the Voyager spacecraft are the Google Street View car going around your neighbourhood taking pictures on the street, then Hubble is providing the overview, the road map for the Voyagers on their trip through interstellar space,” says Julia Zachary, an undergraduate student at Wesleyan University in Middletown, Connecticut.

She and her colleagues reported their findings on 6 January at a meeting of the American Astronomical Society in Grapevine, Texas.

Both Voyagers launched in 1977, on missions to visit Saturn, Jupiter, Uranus and Neptune. Voyager 1 entered interstellar space in 2012 and is more than 20 billion kilometres from Earth. Voyager 2 is still just barely within the Solar System and is around 17 billion kilometres away.

Each is traveling on a different angle away from the plane of the Solar System, and Hubble peered into space along their lines of sight. The telescope gathered information on the light coming from distant stars, far beyond where the spacecraft currently lie.

By analysing chemical signatures in that light, picked up from the intervening material, Zachary’s team could tease out details about the nature of the interstellar environment between Hubble and the stars. The clouds, made mostly of hydrogen, also contain small amounts of heavier elements such as carbon.

Both Voyagers currently lie within the local interstellar medium, a bubble of material that encompasses the Solar System. The Hubble data suggest that Voyager 2 will exit it in a couple of thousand years and then enter another cloud beyond that one. It’s unclear when Voyager 1 will break through the bubble.

Road map for the future

Astronomers have used instruments such as Hubble to obtain indirect measurements of the material in interstellar space. But the Voyager probes are giving them a direct taste of this mysterious environment, sending back data on the electron density of their surroundings. “As an astronomer, I’m not used to having measurements from the place I’m observing,” says Seth Redfield, an astronomer at Wesleyan and a member of the team.

Voyager’s direct, and Hubble’s indirect, measurements of interstellar space will be important for planning true interstellar missions such as the future Breakthrough Starshot, Zachary says.

Brandon Lawton, an astronomer at the Space Telescope Science Institute in Baltimore, Maryland, who was not involved in the work, notes that Hubble helped with the study of the region around Pluto — searching for potentially hazardous moons — before NASA’s New Horizons spacecraft flew past in July 2015. Similarly, the Voyager work “helps map the lay of the land”, he says, as the probes soar outward into the unknown.